I am a concept art student that just graduated a few months ago. With all the knowledge i gained, I got started on this project as soon as I got out of school. The idea of a Tengu/Canthan themed fractal have always been in my mind ever since the launch of GW2. I also dream of working at Anet one day. So as a hardcore gw2 gamer and an inspired artist, I present the first part of my fractal level: Temple of the Celestials!

Brief: When the Mordrem vines tore through the grounds near a Priory campsite, following the vines the Priory scouts discovered a hidden cavern beneath the surface. Upon first excavation it is believed to be of ancient Tengu origin. The Priory contacts the commander and the player and party will accompany a group of Priory Explorers into the Temple to discover its Secrets. 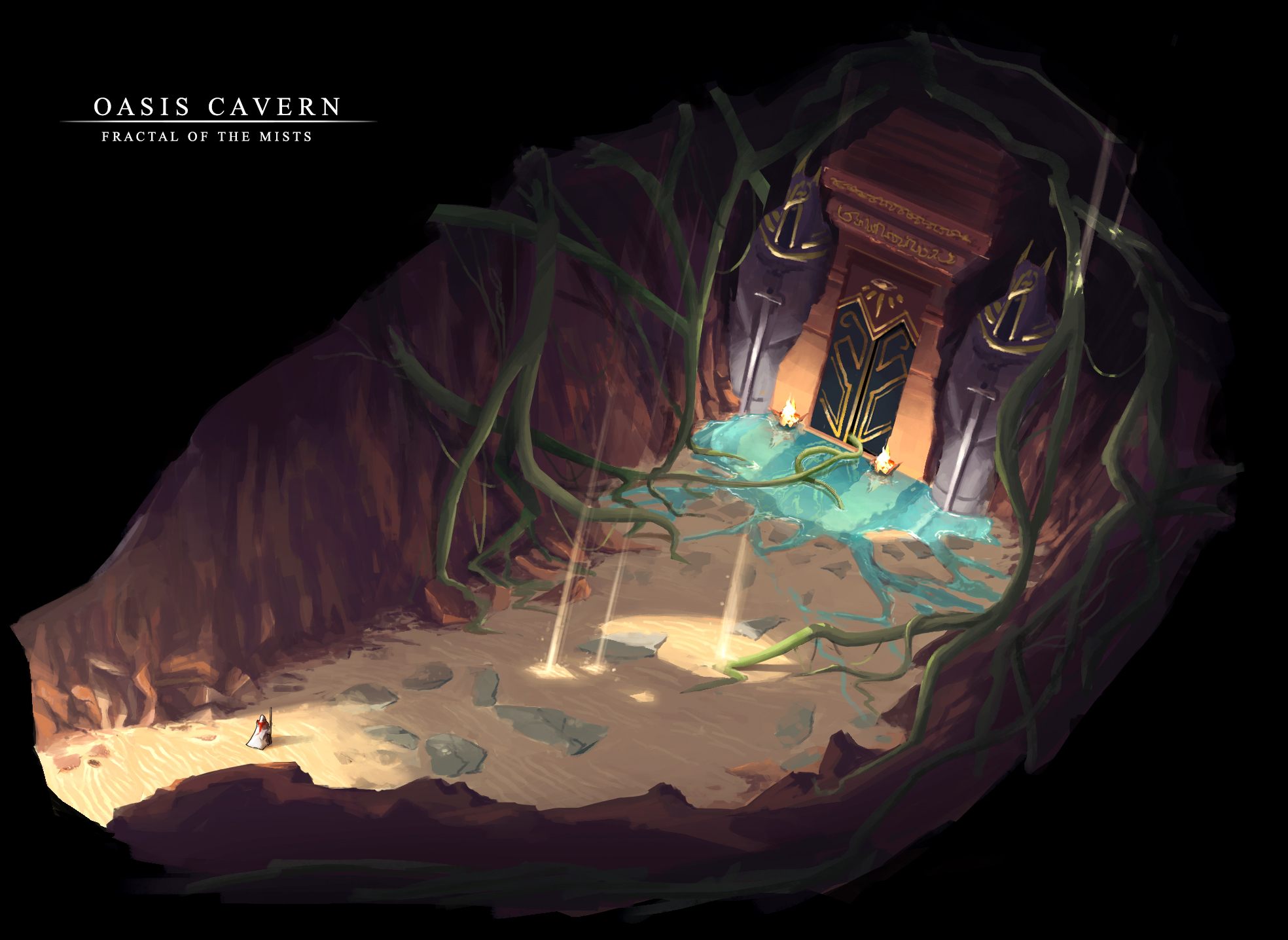 Players arrive at the beach, optional dialogue with Priory NPC. Talking to the marked Priory Explorer will start the fractal. 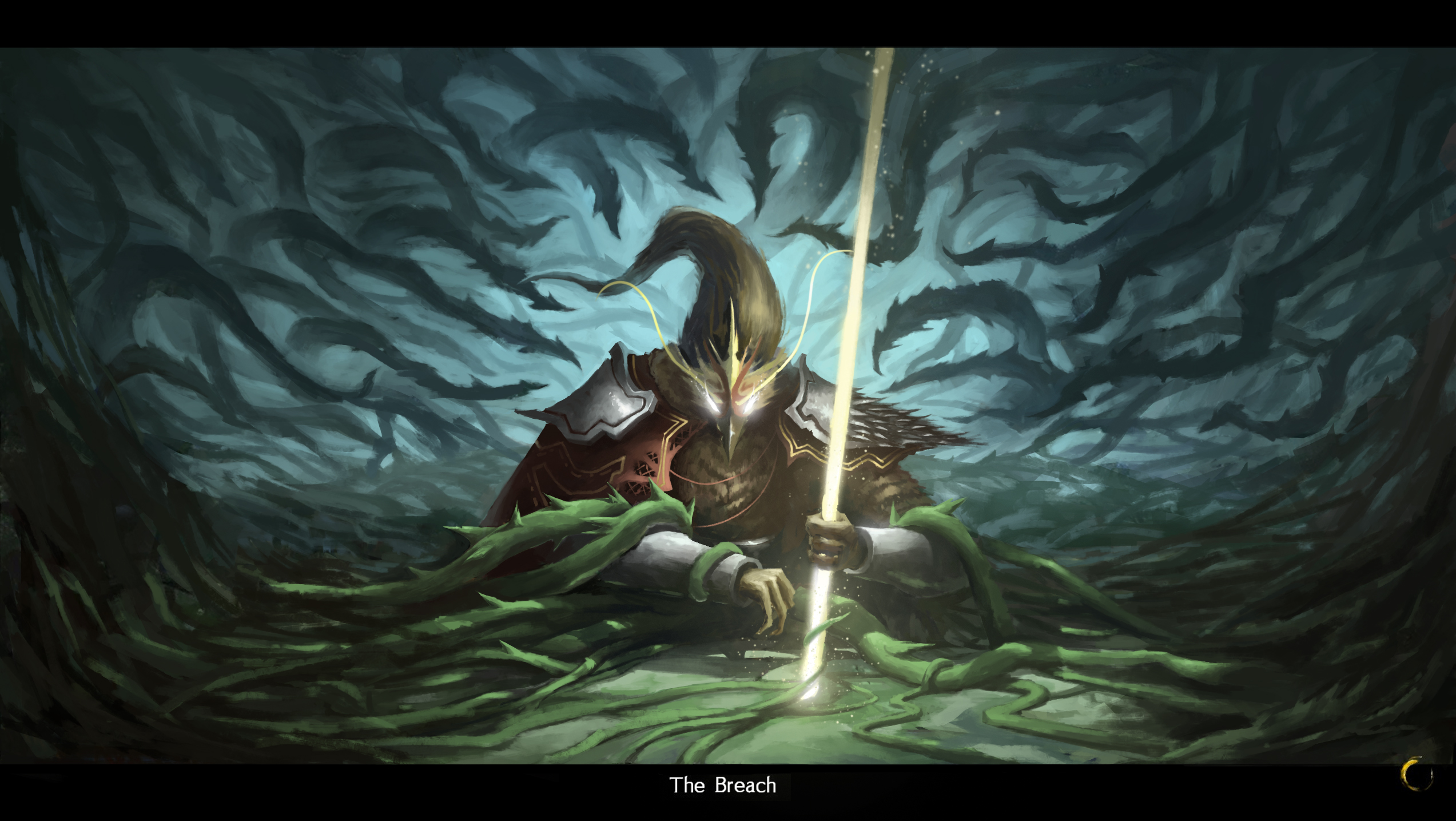 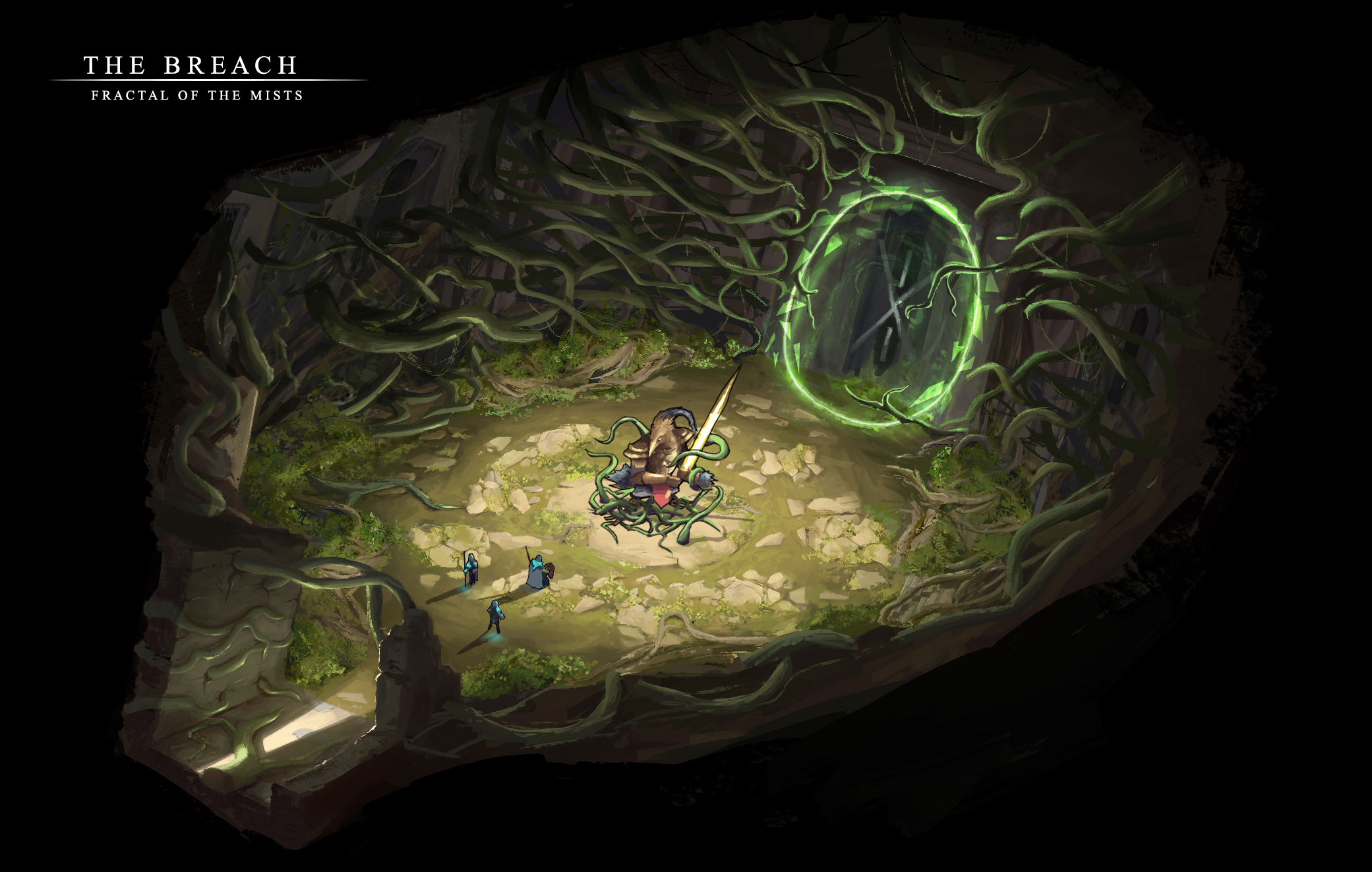 The party enters the gate through the cracked door. A Tengu guardian [Talon Skymantle] entangled in vines confronts the party. The party discoveres that the guardian protects the entrance to the temple, however it is corrupted by Mordremoth. The party decides to free it from the Mordrem control. Boss fight starts: 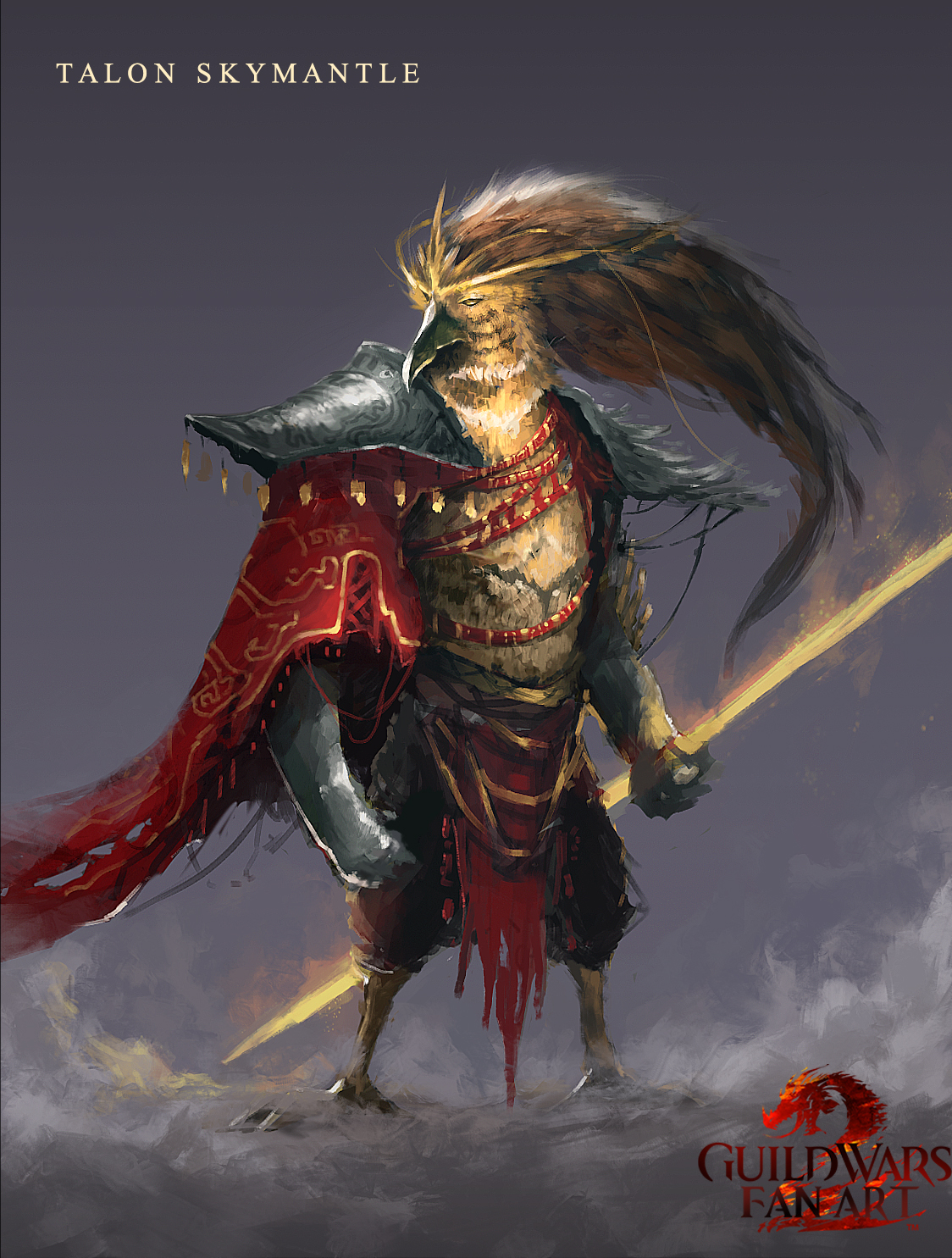 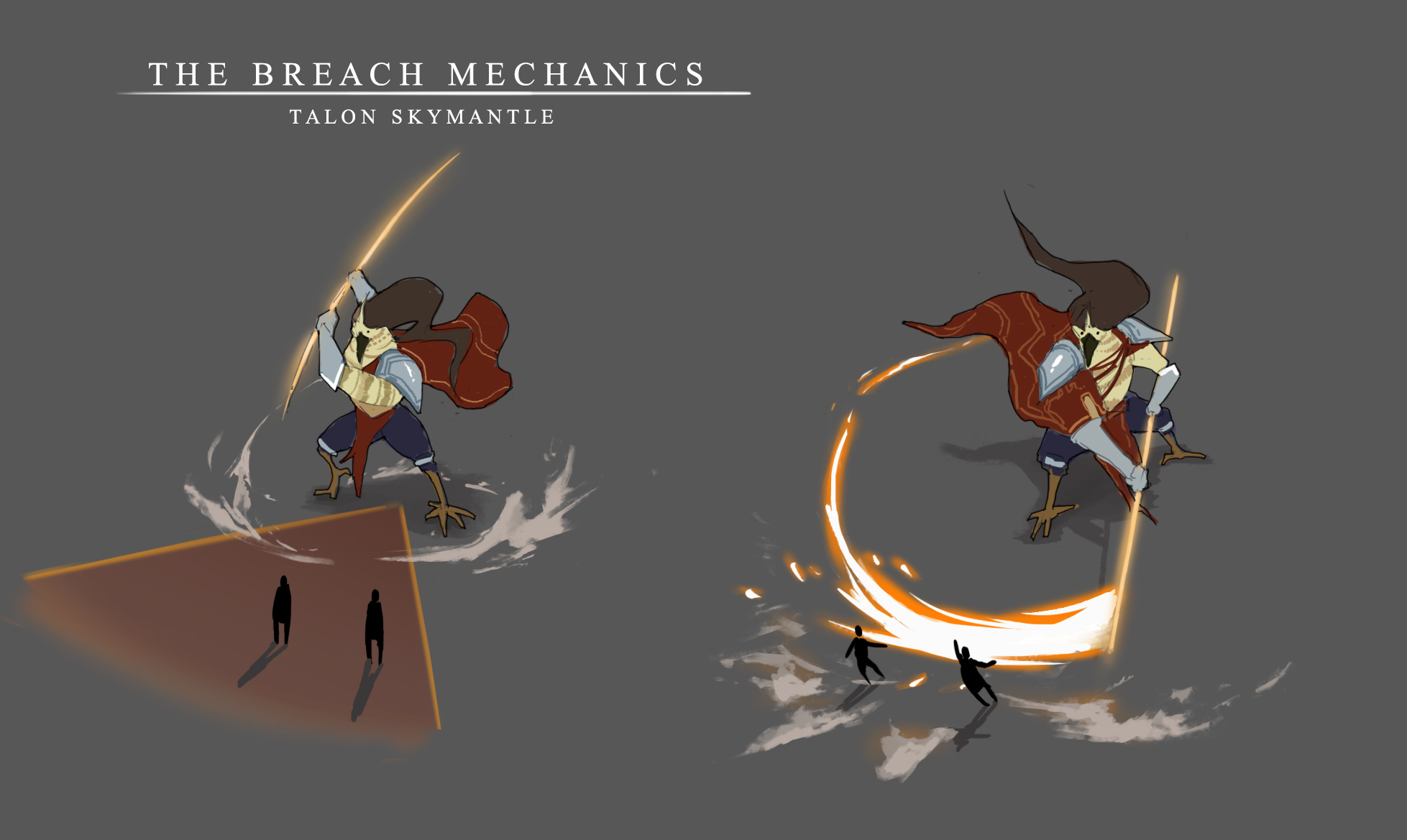 80% Two Mordrem vines will appear at two sides of the stage. North - East - South - West. The vines will have a variety of AOE knock down attacks and can spread poison if not dealt with.

66% Talon will begin spinning his staff and charge for a stage wide AOE attack. This attack can not be avoided. The party needs to either break his defiance bar or hide behind one of the Mordrem vines that popped up earlier. Talon's defiance bar is quite strong so an inexperienced group might not have the CC to break in time. If the party chooses to hide, then a few vines will need to be left alive for this phase. Each vine can only protect 3 players so a party of 5 would need to leave at least 2 vines alive. Be careful when hiding behind the vines as they can still attack and knock players out of the protection zone.

40% 4 Mordrem vines will appear at 4 sides of the stage. NESW

0% Vines surrounding Talon will break. Talon collapses, the barrier protecting the gate will vanish and the vines surrounding it will rush in through the gates. (insert short unskippable cutscene? 100cm players triggered) Talon tells the party to continue into the temple to save it from the Mordrem.

Entering the gate the party discovers that the hallways are filled with poison. The party will need to fight through each path to retrieve 3 orbs and bring them to the end which will wipe the poison. Each orb will radiate a bubble that will negate the poison and allow the party to traverse through. When carrying the orb the player will receive a debuff that will eventually down the player if held for too long. (Cliffside Hammer) The party will need to alternate carrying the orb for efficiency. This event acts as a tutorial for the next few bosses.
Possible mini boss fight at the end of path of wisdom.

At warrior's rest, the party will need to split up and traverse through either a jumping puzzle or some kind of event. Enemies could spawn each time a player steps on a platform. Or players must follow color coded platforms etc. Mad King says etc.
At Wayspire and Souspire are two Tengu guardians in the theme of Light/dark Ying/yang so the design and mechanics will go somewhere along that. What i'm thinking for this part is splitting the party up, and utilizing the middle platform to implement a more interesting mechanics. A group of orbs could spawn in the middle and depending on its color the player will need to find the correct orb and bring it to the corresponding boss.

Going through the portal will teleport the players to the Inner Sanctuary. It will be a square courtyard with many statues which will correspond to the many celestial gods that the Tengu worship. The mechanics here will be derived from each of the celestial beings. The boss will have a rotating celestial buff at all times. It will also spawn celestial being from different statues around the map. Each celestial spawns with their unique skill. And if not killed within the time limit, the boss it will gain 1 stack of the celestial's buff. If the boss reveives 3 stacks of a celestial's buff at any time, the boss will permanently gain that skill and will add it to their faceroll rotation against the player.

I really enjoyed working on this project so I went a little farther and drew out some of the mechanics of the fights too. I run fractals and CMs often so I payed a bit more attention when it came to mechanics. I wanted this fractal to be unique, in the way of new mechanics never seen before in any other instances, but also keeping consideration of limitations of code and extra assets. Some of these mechanics might be too much for a fractal, I try to keep that in mind, but In the end this is just a fan project, whether its implemented or not I'm having a blast imagining myself running through these mechanics.

If you've read this far, please feel free to leave a like and subs.. wait no, feel free to give me any feed back on whatever you might want to see drawn/designed. I'd love to hear what you guys think!