My Firebrand build and how to improve it maybe? — Guild Wars 2 Forums
Guildwars2.com Forums Support Wiki

My Firebrand build and how to improve it maybe?

I have recently tried again Firebrand after over a year playing Dragonhunter only (at least when it come to Guardian; I did play other classes as well).

Here is my current build:

The stats seem a bit wrong though, my crit chance is higher even without food. Here is my stats without any food or buff effect one time with scepter and one time with axe: 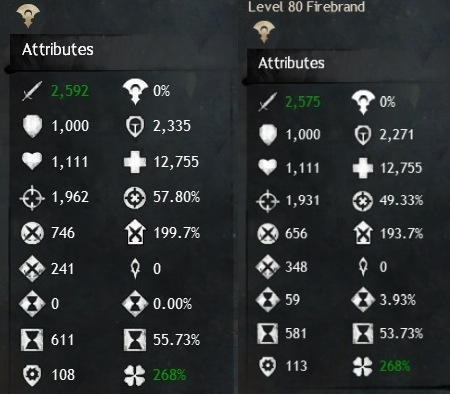 The idea behind this build is basically as dps and buffer. I do not own legendary gear so I have to compromise with sets and make something that works for most circumstances. I do however have extra set of accessories with berserk stats for my dragonhunter setup and I made a healing armour set as well (Power, healing, concentration) but found out that healing doesn't suit me very well. The concentration seems to be about right for my purposes. Main focus is Quickness but also Might, Fury, Retaliation, Protection and Stability. So I figured that is about the best compromise when it comes to sacrificing dmg vs boon duration. Therefore armour and weapon with dps stats.

There is some meta-builds out there which I studied. However here is why I didnt chose the Firebrand meta-build: I would lose either shield or focus skills if I used the Greatsword. And I really like the axe skills with its pull and the symbol number 2 skill. Also the attacks are so much faster than the slow greatsword. I can move much more the way I want and still deal decent damage. And when it comes to the directional buffs it is easier to manage than with the greatsword whirling around in every direction. Therefore I opted for the axe instead and make use of as well focus and shield as well.
Axe seems to be direct damage as well as condition dmg. As I do not own condition set I opted for berserk. The meta-axe builds focus mostly on condition dmg. However I know how condition dmg works from my scourge and I really enjoy the direct damage from the axe, everything dies so fast. My feeling is it works great, recently I ran T4 dailys with it and also some strike missions. What do you think about Berserk build with axe? Am I doing it wrong?
My biggest concern is the viper stats on my axe. I made this one long time ago and I am not sure if I should maybe change. However I tried to make use of the condition damage of the axe skills at least a little bit by the use of the trait Kindled Zeal and add food with power and condition dmg. The Might-buff helps here as well, therefore I achieve quite some condition damage with this setup of gears, traits and buffs. The expertise however is probably useless with only the one piece of gear with that stat.. .
Also I didn't opt for Radiance as in the Meta-Build for Quickness-Firebrand. Instead I chose Valor. The reason for me was, that it seemed to me the only reason why the meta-build requires you to use Radiance is the sharing of the Power signet and I felt the other traits rather negligible or useless in that build. Even that the Power signet shares with allies only when activated "even then adds "only" 180 Power which is in a berserk build just over 5% of overall power. And I would sacrifice alot of other traits. In particular the cd reduction on focus skills and the "Strength in Numbers" trait and some buffs. That is why I chose Valor.

So in particular I am thinking to change my weapons, maybe the viper from the axe and also the sigils, maybe add another boon duration. or something but I am unsure about those. Or maybe try to achieve more expertise/condition duration? What do you think on my weapons, what should I do about those?

Also about the build in general and direct damage build on axe instead of condition? Any thoughts on that? It seems to be working quite good from my experience so far... .