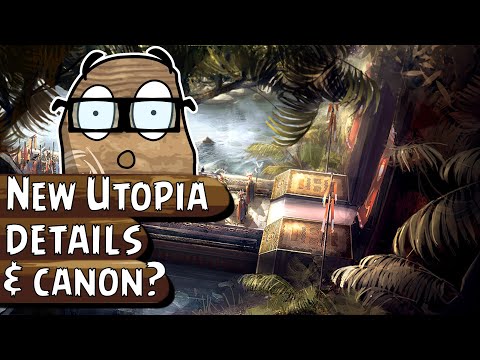 While I think the Deep Sea Dragon is most likely, I'm not sure what angle they will take with it. I would have to assume we would be going there to aid them, perhaps DSD has destroyed half of Kaening or something (which might make it easier for them to build the city in a gw2 setting). If we go there to save the DSD it would feel like kind of a repeat of POF and to some degree the current story.

It is possible however that our reasons for going there could be completely unrelated to DSD. Aurene, now dabbling freely in the mists at the scrying pool, could commune with the Oracle of The Mists or see something happening there. Could even be something involving another being from the mists, and potentially the being that Jormag eludes to when she speaks of more horrible things on the horizon.

WoodenPotatoes did a video the other day on Utopia and how the latest art book they released kind of went back and took a lot of the current aspects of GW2 into account. Like explaining that Mesmer Chronomancers are different than Utopia Chronomancers, and explaining that Rata Sum architecture is still different than the architecture of the Xoe-whatever people in Utopia. It also went into a little bit about how Utopia was originally home to old gods and new, implying that perhaps the new gods and presumably the human gods that we are familiar with, helped free an evil force that destroyed the old gods in Utopia. It even made it sound like it could explain the rise of the human gods, i.e. Abaddon may not have killed Arachnia but could have taken in its power after the fact. It was pretty interesting and the fact that they went through the effort to make a lot of that lore fit in modern day GW2 makes me think that it could be an angle they're planning to take moving forward.

Perhaps the evil that defeated the old gods in Utopia is finding its way to Tyria. It feels like there's a lot of subtlety in the current story eluding to the importance of the mists and the stars that may become significantly more important later on plot entry points for our travel to Cantha.

Or, we could start off with the main expansion story involving DSD, and then have a living season geared towards bridging a connection to Cantha or diving more into the very beginnings of Humanity on Tyria, including other potentially unknown civilizations.

Lastly, we fight a lot of dwarves in Forging Steel that seem to be using destroyers. What if the dwarves, via whatever malevolent force is in the dwarven fractal, have found a way to subjugate the will of elder dragons/minions and it's not as simple as them being corrupted by Primordus but something else? While the elder dragons are probably largely different from the old gods of Utopia, knowing that there's a force that could have destroyed a whole pantheon of gods makes me wonder if they're setting precedent for something similar with the Elder Dragons.

Also want to point out, again, the various assets we've had added lately. I.e. The new island fractal with ruins that look unfamiliar to what we've seen, the gecko springer skin, the legendary scepter, and numerous other things. While it may not necessarily mean much, it's interesting timing that they've chosen to update the Utopia lore.