This is plainly a educational post about how the WvW is structured and designed plus the populations issues accompanying with it currently. The purpose is to educate players about the current WvW systems and help facilitate related decisions making. The explanations given are based on my personal understandings resulted from observations and reading related sources from either the devs themselves or logical assumptions from fellow players over the years. If there are any portions that you feel is inaccurate or can be misinterpreted or left out, feel free to point them out.

Current WvW is a server based design in which each server has their own population base made up of Pvers, PvPers & WvWers while the server population fixed threshold is based on WvW itself. The current WvW design and past events contributed to populations disparities between servers.

This is a timeline base on anet's decisions regards to servers or WvW. Hopefully from this timeline you will see that the current WvW issues are partly because of the decisions of the past.

Before 2015 July 28, there were observations that selected servers have their populations threshold increased.

Despite having megaserver, it doesn't change how the server is structured. Players still have to choose a server and therefore belong to a specific server, server's threshold is based on WvW population itself thus WvW is now currently structured in this manner 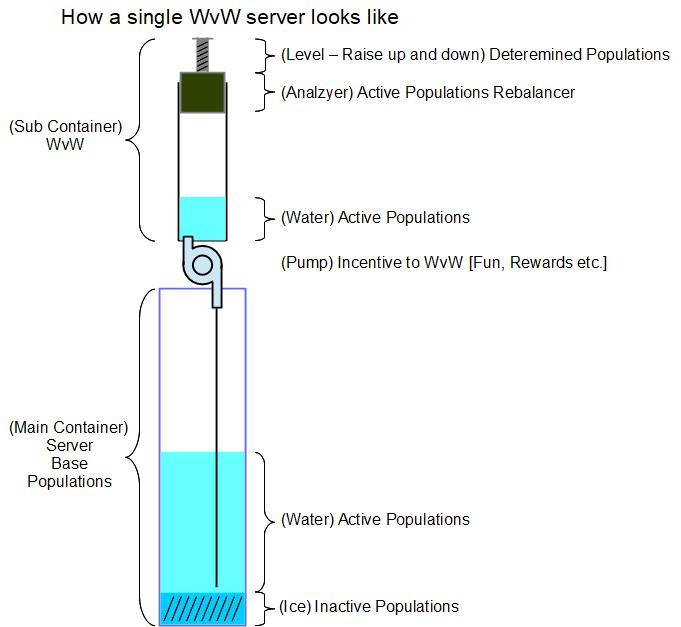 When we put different servers side by side with each other, we can have something like this 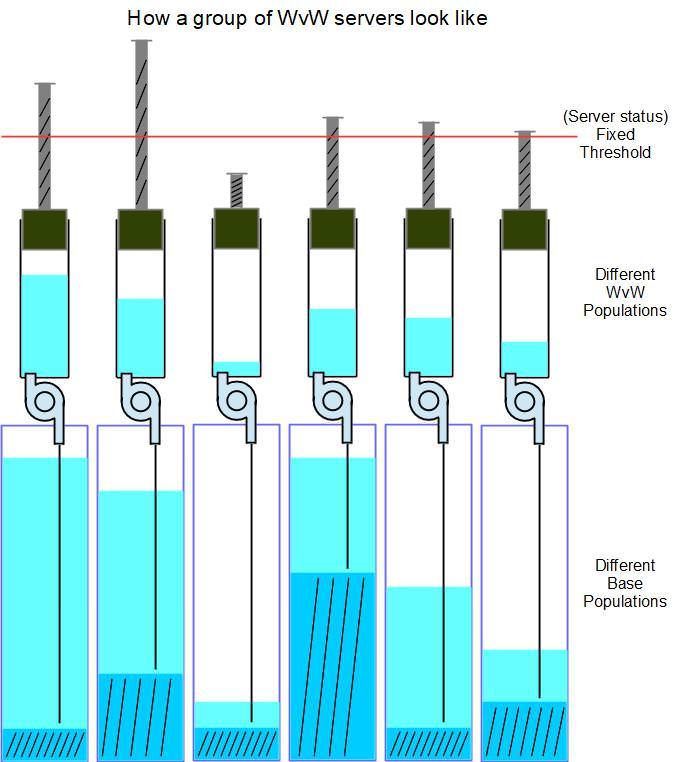 Just by looking at the images, we can easily determine the obvious issues.

Base populations are all the players in that server, regardless if is PvErs or WvWers or PvPers or inactive or even bots. According to the timeline, we can see that there were a lot of chances where populations can move around and get to uber stack on any servers. All the past events resulted in a disparity between servers' base populations and since WvW populations is correlated to the server populations, it will affect the populations balance.

This fixed threshold has another flaw due to its fixed nature. There are servers that are very low in WvW count therefore it will takes a lot to hit that threshold. This huge space allow what we called stacking and inorder to stack, we have to destack from elsewhere. It may looks fine since they will still hit the threshold but let's not forget that we also need take into account of the unpredictable server's base populations and the limitations of the threshold algorithm which will be explained next.

Another flaw of this algorithm is it doesn't account for EOTM. While it is logical to exclude EOTM because EOTM is a mix of servers but at the same time it also become a exploitable area. Since the population threshold algorithm only takes into account of WvW, then, in the event that guilds or individuals decided to hang out in EOTM due to whatever reasons, the accuracy of the population calculation will take a hit. Also, it is likely possible for players to game this algorithm just by getting everyone to hang out in EOTM for weeks while waiting for the algorithm to update in order to stack the server further.

The algorithm is observed to be updated by using data over a period of an month. Whether this data is entity based or collectively based, it is hard to determine. However, we can say that the data will take a month to be reflected on the status. While this can possibly prevent massive bandwagon, it also a flaw where any major guild wars 2 events that capable of pulling populations off WvW will end up opening the servers for that long, including previously extremely full servers, tipping the balance even more when the events are over.

In essence, world linking is a soft merger between servers where it give anet the flexibility to swap servers around if need to. However, world linking doesn't resolve population imbalance, it only resolve population decline. This is because every server is different in their populations across timezones, it will be quite a miracle if anyone is able to find matching servers for all the servers. This already difficult pairing decision to minimize population differences is made even more chaotic when large groups of players performed transfers between servers or deliberate boycott WvW to tank populations, throwing populations data into disarray and thus take months for it to become accurate once again. At the mean time, the rest of the populations have to deal with the extreme inaccurate populations linking decisions made base on dated data.