1.Is joko really dead? IF yes, does awakened "live" with his help? If Joko is dead, does the awakened die too or they just became free and can perform whatever they want? So for all awakened, the following story will be different. Awakened olmakans would join their family and pals again without attacking? Awakened soldier and mummies would be simply disappointed and scared, and for ahem awakened Inquest it would change anything, they will just continue doing their experiments... but after came back home their colleagues will surely experiment on them to learn more about awakened.

So basically, if joko die all his army is simply wiped out? Could we became friend with awakened? By the way, if an awakened continue to live, what is the reason? Is he animated by a spell, magic or the tar himself? Very hard to define how awakening work when looking at the researcher failed event to rescue her ancient awakened lab assistant.

2.About dragons, will we continue to kill dragons until the world explode, or does the commendah finally understood that is bad? And what if aurene got awakened ?
I dunno if I'm part of a minority or not, but I wish so much that joko is not dead. Every-time we got a decent and nice enemy, he got fired just to prove again and again that we are a god, we can't die, we are better than everything blah blah blah, I agree with the joko's argumentation during the last cinematic. It would be nice to be under pressure more, have a real feeling of danger, I don't even got a shiver: 1st story: Oh! Scarab! No worry: squish squish squish DONE. 2nd story: unexpected help from primevals. 3rd story: We need allies! Copy-paste from ep2.
4th: Hey I'm faren. Final: !! Third generation! Close the door! done. Joko: Goodbye! -> Aurene Nom nom nom.

This is the accurate sum up of the story. Braham messed up again....
Never felt scarred during a story telling about a VERY dangerous disease that literally make the infected torso and belly explode and free a ton of crawling scarab from the corpse. At a point that I run into every guard during "forearmed is forewarned", just begun to feel fear after the arrival of champion all around the instance and inquest tier 4 turrets.

3.Are we staying around kourna and the crystal desert for the next episode or are we going somewhere else? Because I'm surely alone to think that, but I have enough of sand and any kind of desert maps, haven't enjoyed Main PoF maps personally, whereas I'm okay with HoT or Core.

4.What was the original plans for this new episode, does something got changed like the volcano idea for sandswept isles?

5.FTT are a great concept, it would be nice to be able to use them on any map, these mechanics are amazing!

6.About the map now, why not have used the integrity of the moon fortress, the bottom map algae sea and the rocky flanks of the map? Since after exploring, and calculating; if we consider the playing area, 35% of the map remain unexplored after map completion, If i consider the REAL boundaries of the map, it's now 55%, so more than the half!!!
Here is the "proof", by simply using the beetle on the east cliff, I broke outside the map, blue=explorable, red=unused, orange=great potential wasted: 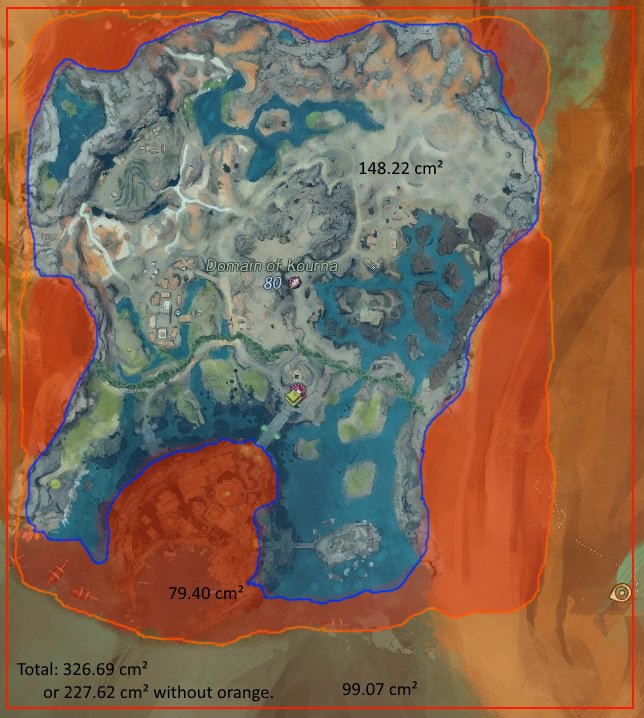