It’s true. My main character runs around Tyria with 15 full sets of mixed ‘n’ matched armor her inventory. Each set has it's own associated weapon and mini pet as well. (That's 105 slots, in case you’re wondering). I like my character to look "just right" for every situation and in every environment. (It annoys me, for some reason, to see half-nekkid characters running around in the northern Shiverpeaks unless they're in the Coney Island Polar Bear Club). Each of my character's looks also has an associated hairstyle as well, since I’m one of the lucky few to possess a Permanent Self-Style Hair Kit. So while I may not be among the elite Guild Wars 2 players, I like to think that I fare pretty well in Fashion Wars 2.

My other passion is making screen captures. I usually like doing an emote in order to strike unique poses, but that tends to remove my weapon from my hand. I wanted to show you my complete armor sets with the weapon, so most of these look like my character is just standing there posing for a book cover or something. Sorry ‘bout that.

You will notice that my tastes tend toward “realism" in my fantasy, so I don't have much in the way of items with particle effects. (I'd rather see my armor than a bunch of clouds and sparkles and swooshes). I don’t much care for oversized weapons or armor pieces either.

I included a list of the skins I'm using, since I know that some of you will be curious. I hope you like these, and I hope they inspire you to play a little Fashion Wars yourself, instead of always using ho-hum Outfits. All of my pictures measure 3840 x 2160 pixels... feel free to download and use them on your desktop or in a slideshow screen saver if you like. Now without any further ado, here they are in alphabetical order:

[spoiler] I use this look in Norn territories and any other cold, snowy climates. I don’t like the way the game chops off all my hair when I wear a hat, so it’s not shown here. But if the snow starts falling hard, I’ll put it on. No sense in catching a cold just because I want to look good. 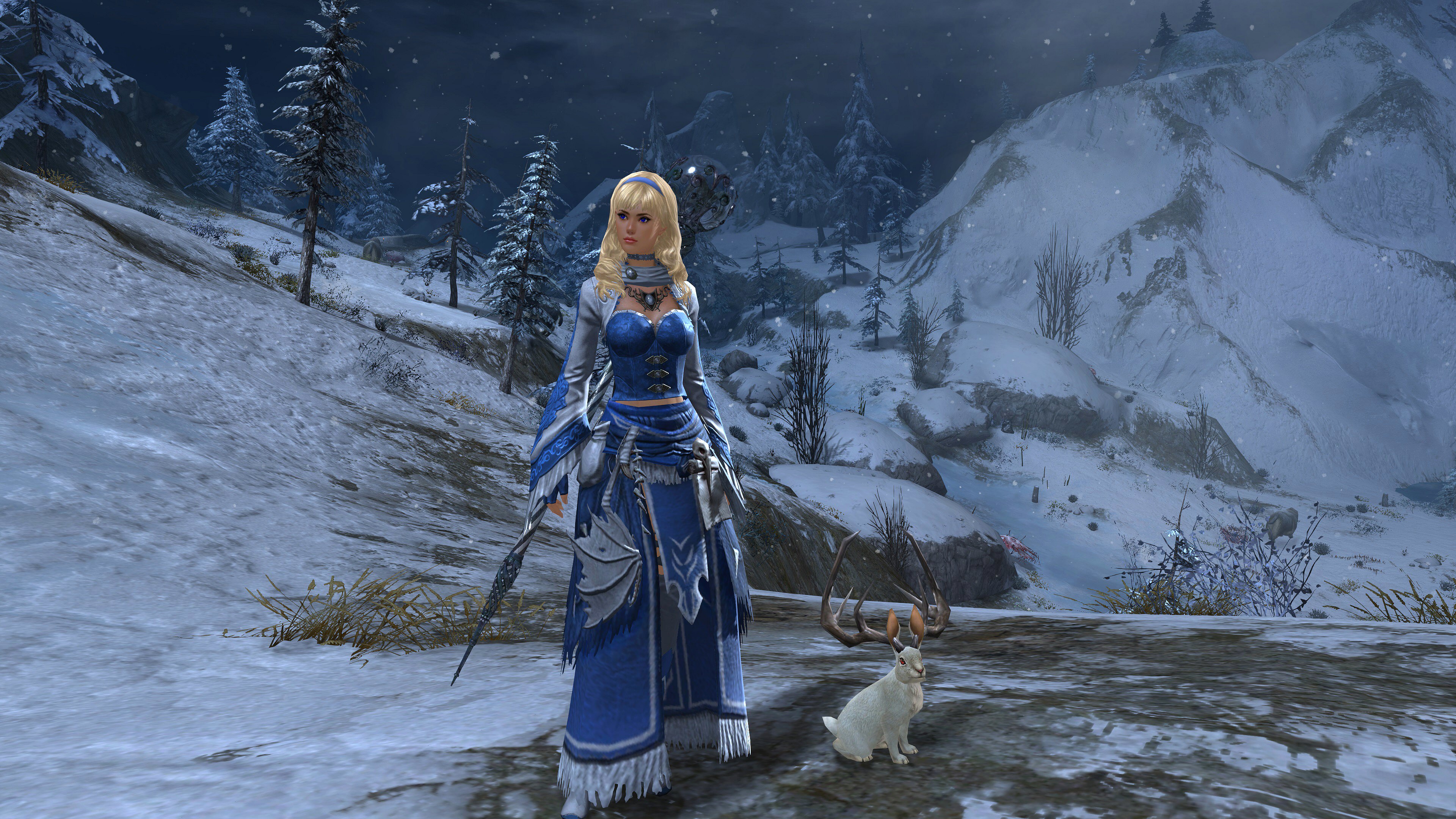 [spoiler] I use my “Battle Mage” look in the Charr territories (Ascalon), and other rugged lands. 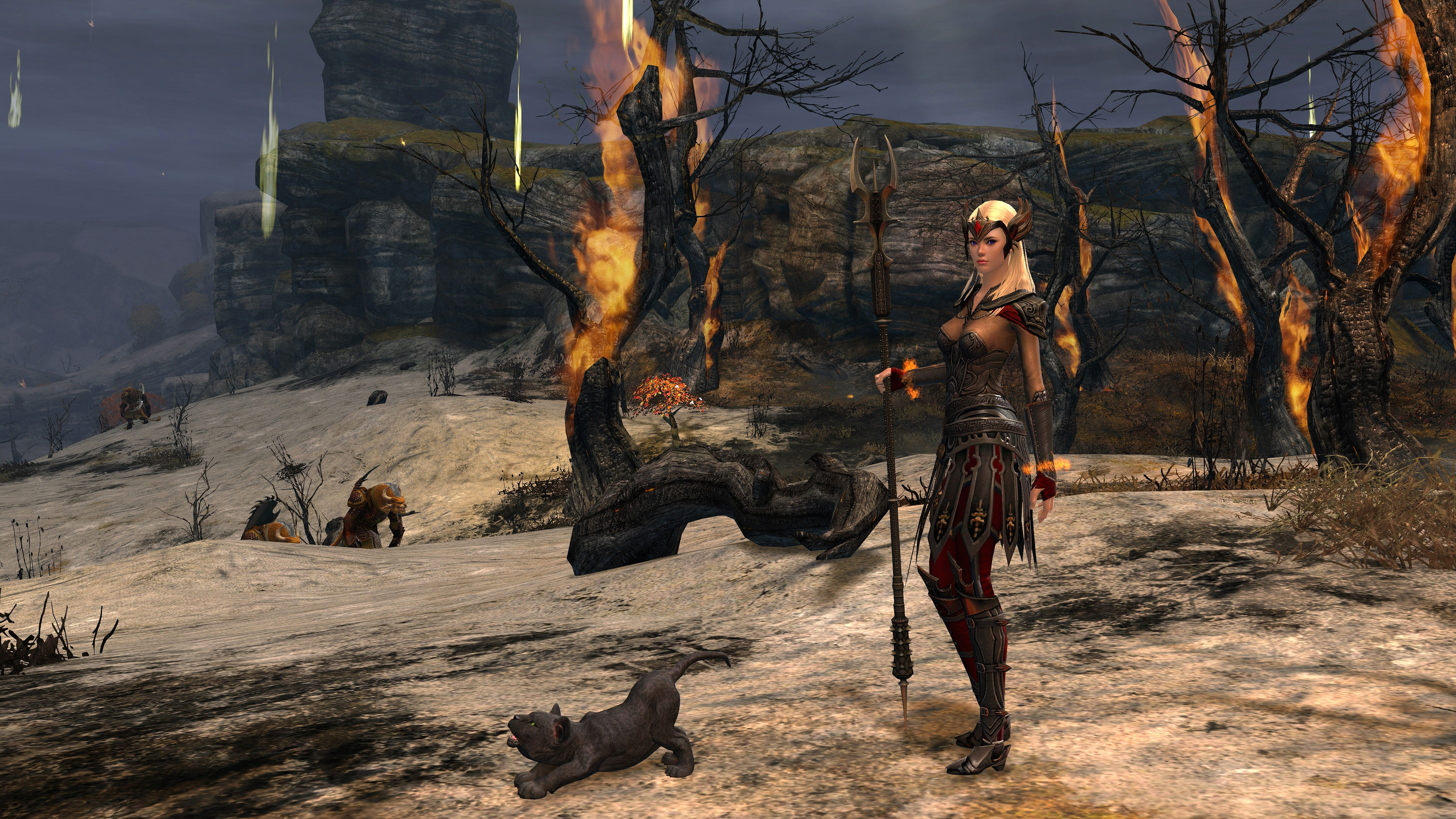 [spoiler] The Countryside Wanderer gear is mostly for the centaur-threatened Krytan lands. 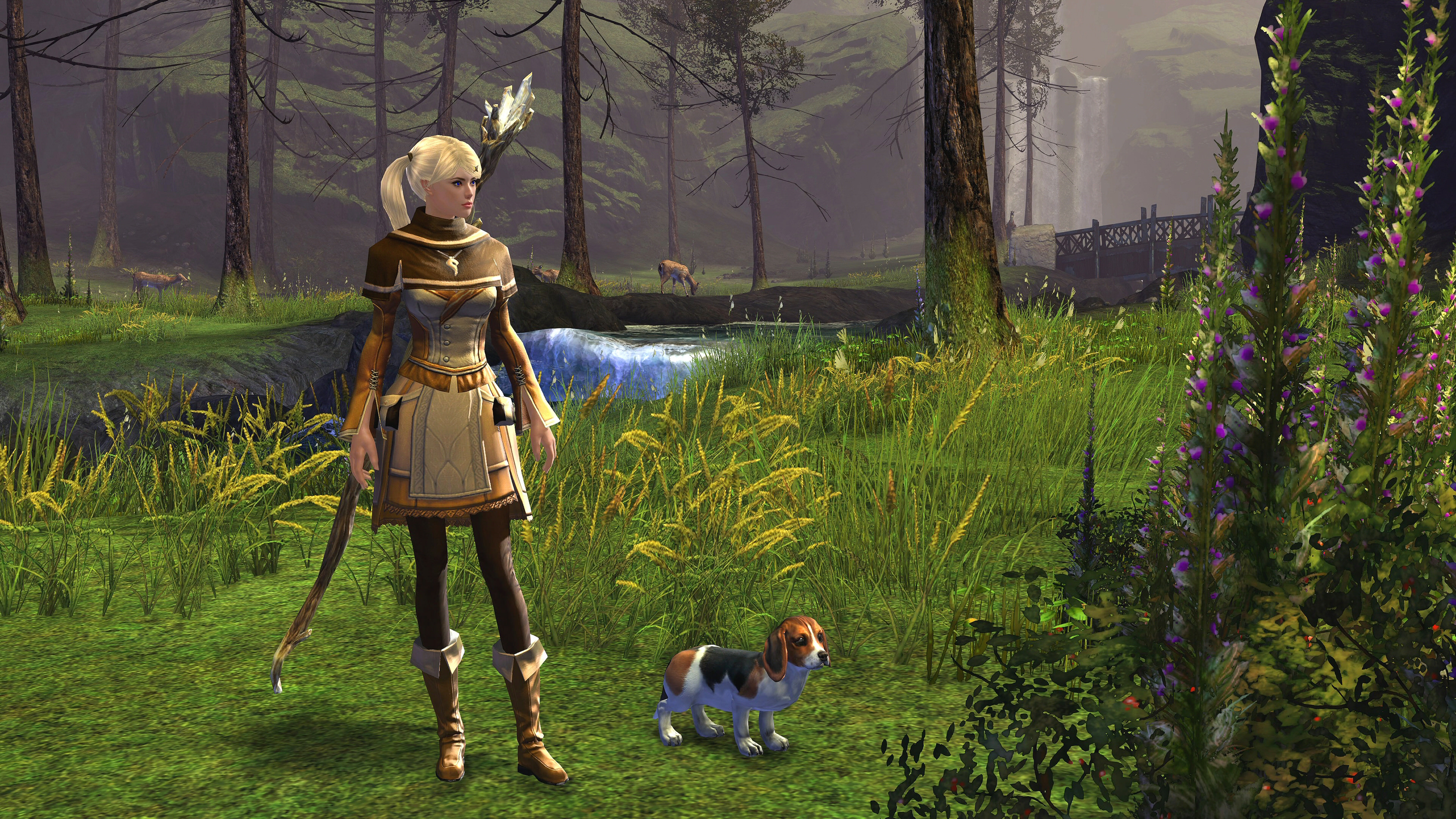 [spoiler] I use the Desert Flower look in most of the Path of Fire maps. It also works well in Southsun Cove. 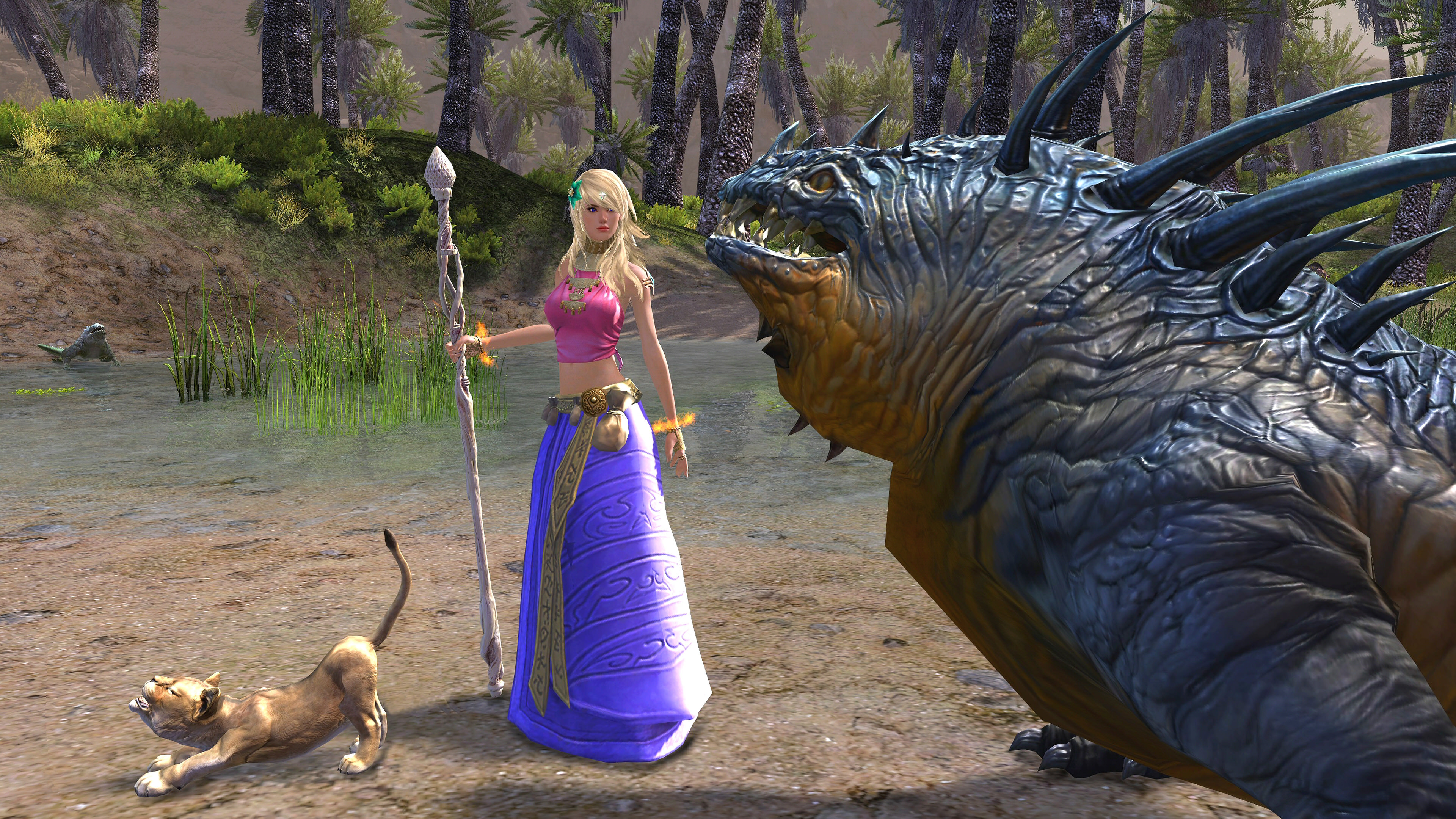 [spoiler] The Little Pixie look includes a pixie hairstyle (naturally) and the use of an Endless Miniature Tonic. It is primarily for Sylvari lands, and any other “fantasy forest" settings. 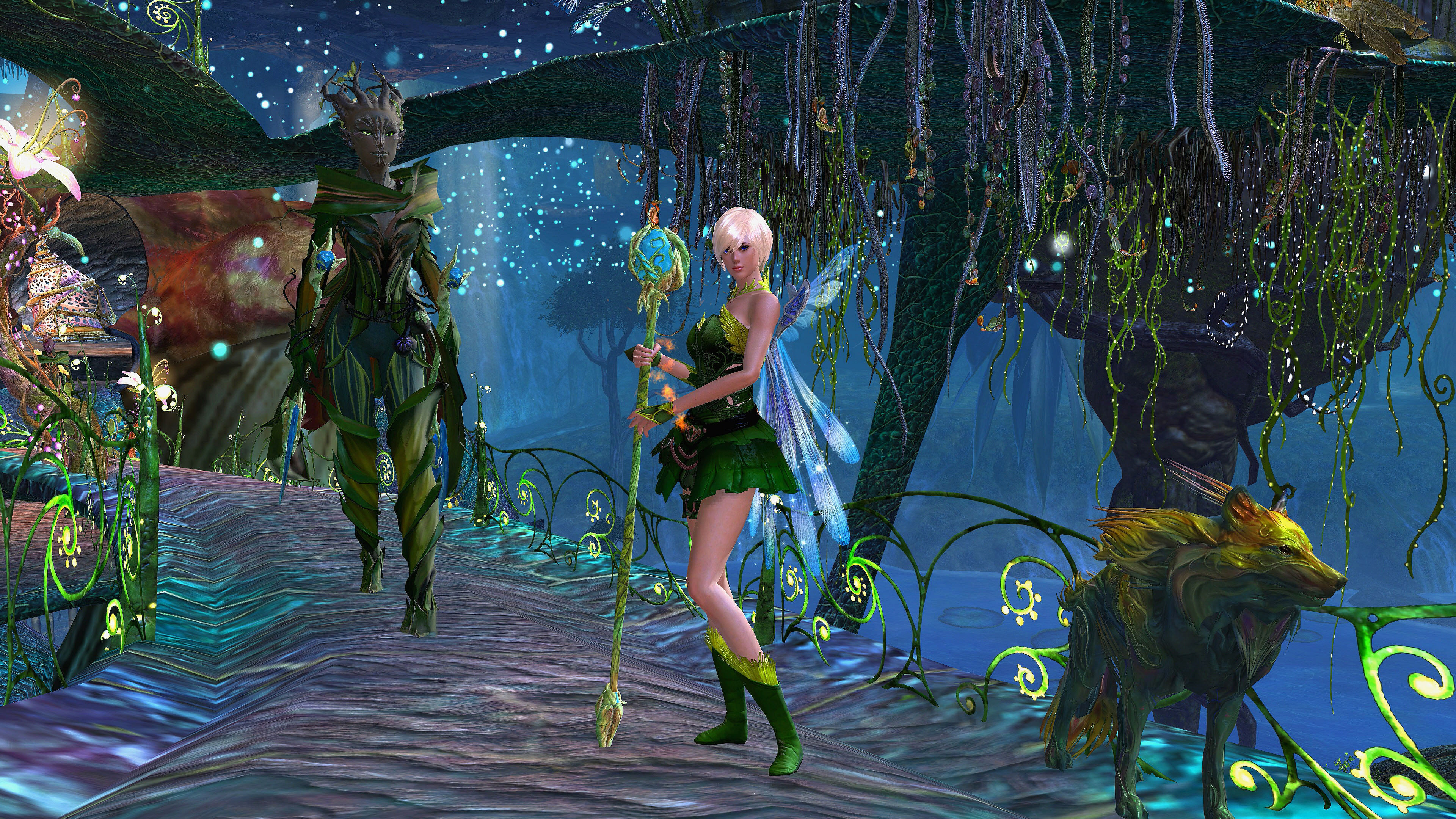 [spoiler] I was shooting for a “Mother Nature" or 1960's "flower child" look for the Heart of Thorns maps. 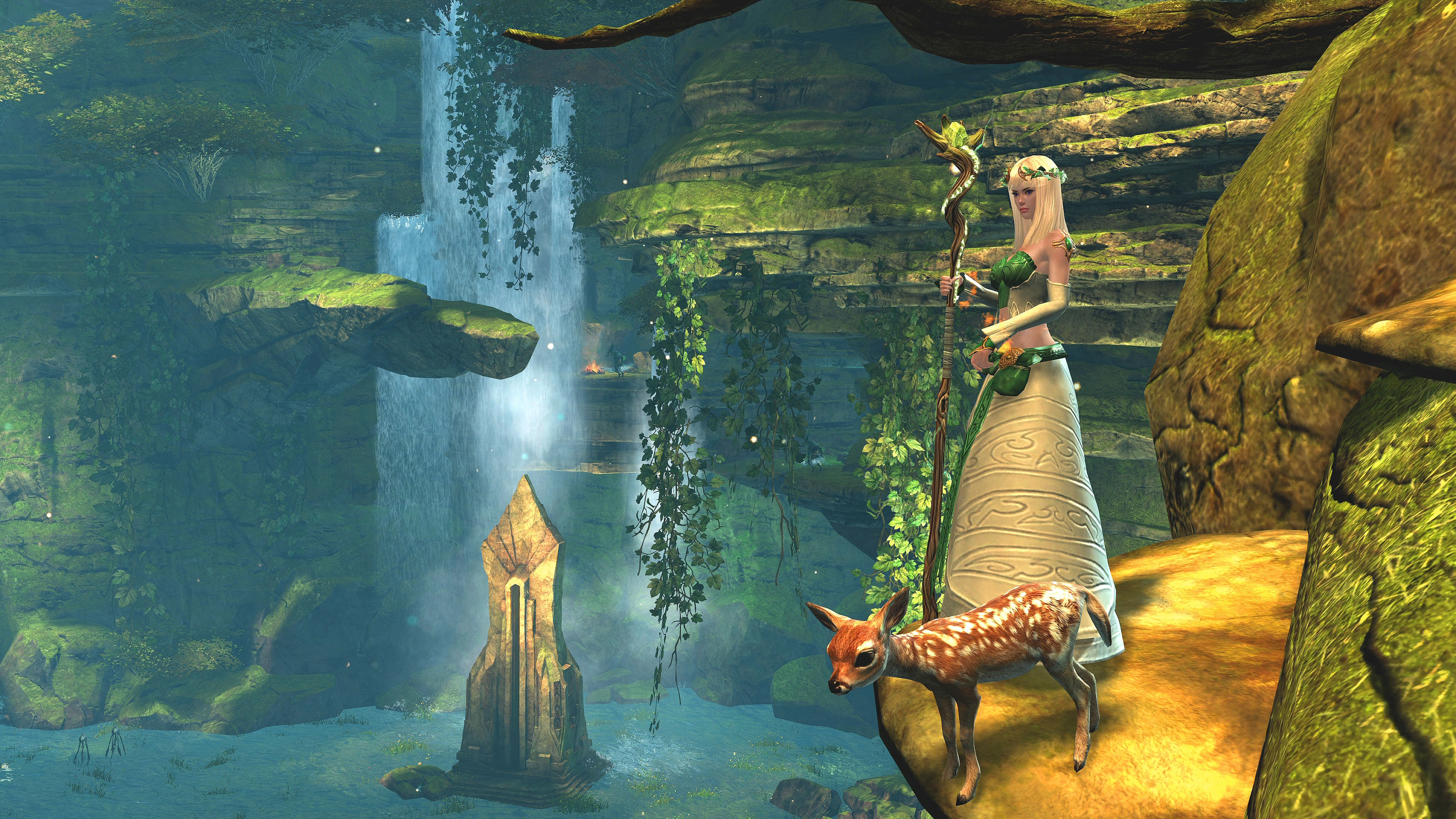 [spoiler] I don’t have a regular use for this one. Just for the occasional times when the story calls for me to meet with Queen Jennah. (I typically show her up, since I can afford shoes). I will also use it whenever I want to whip out my Emblazoned Dragon Throne and look the part. 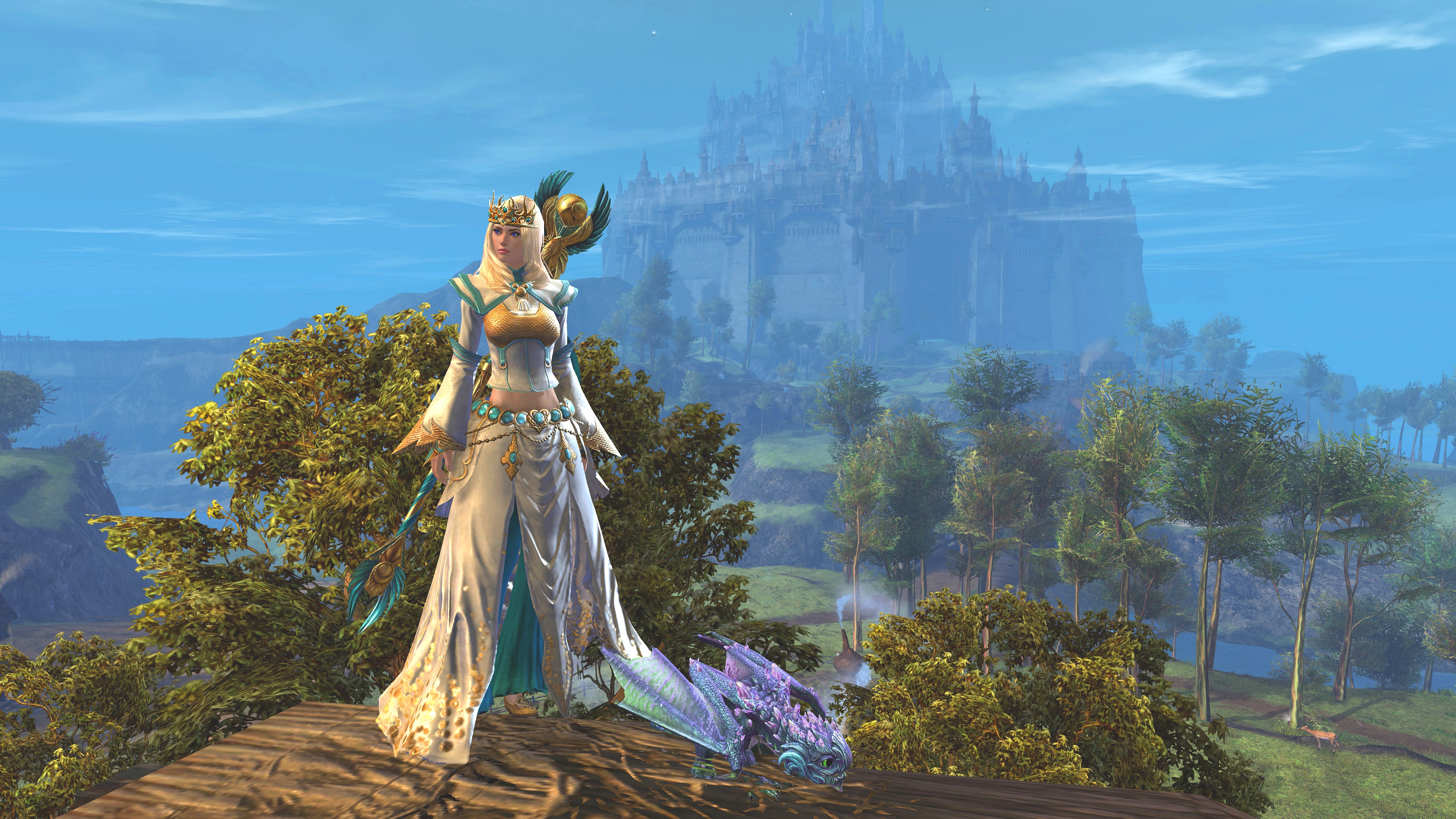 [spoiler] For RP times, as good as any of the old Town Clothes. (Far BETTER than the un-customizable Outfits that they made out of the old Town Clothes). A great look for Octoberfest (or maybe a visit to the Charr "Meatoberfest" celebration!). No weapon... this is down-time wear. Mini Puppy or Mini Orange Tabby Cat if desired. 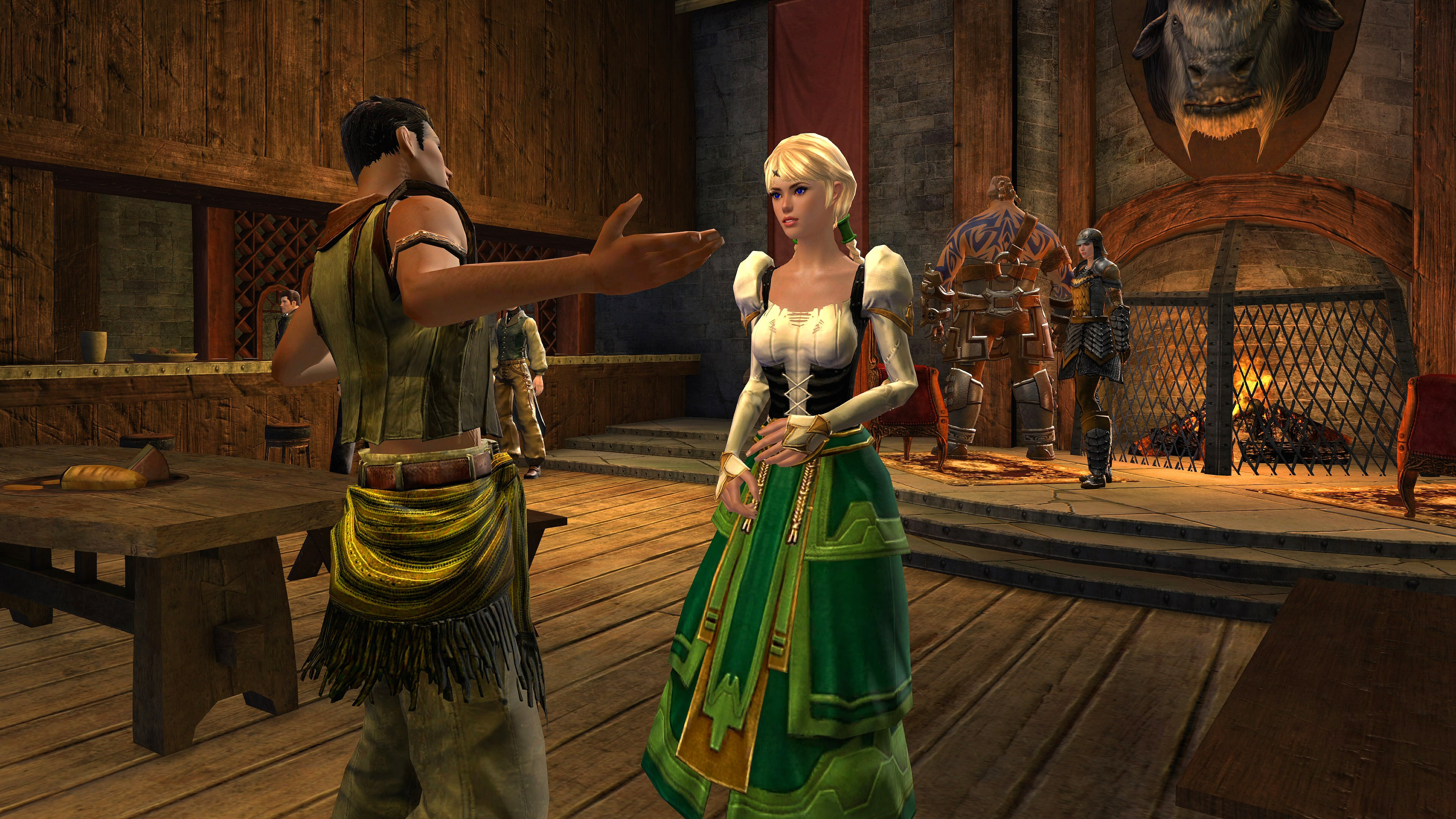 [spoiler] For those “social gathering" storylines (where I rub shoulders with the city council, dignitaries, etc.) as well as RP parties. (The bunny ears come out on Easter and New Year’s Eve). No weapon (but have something handy in case the storyline introduces party crashers). No mini pet. 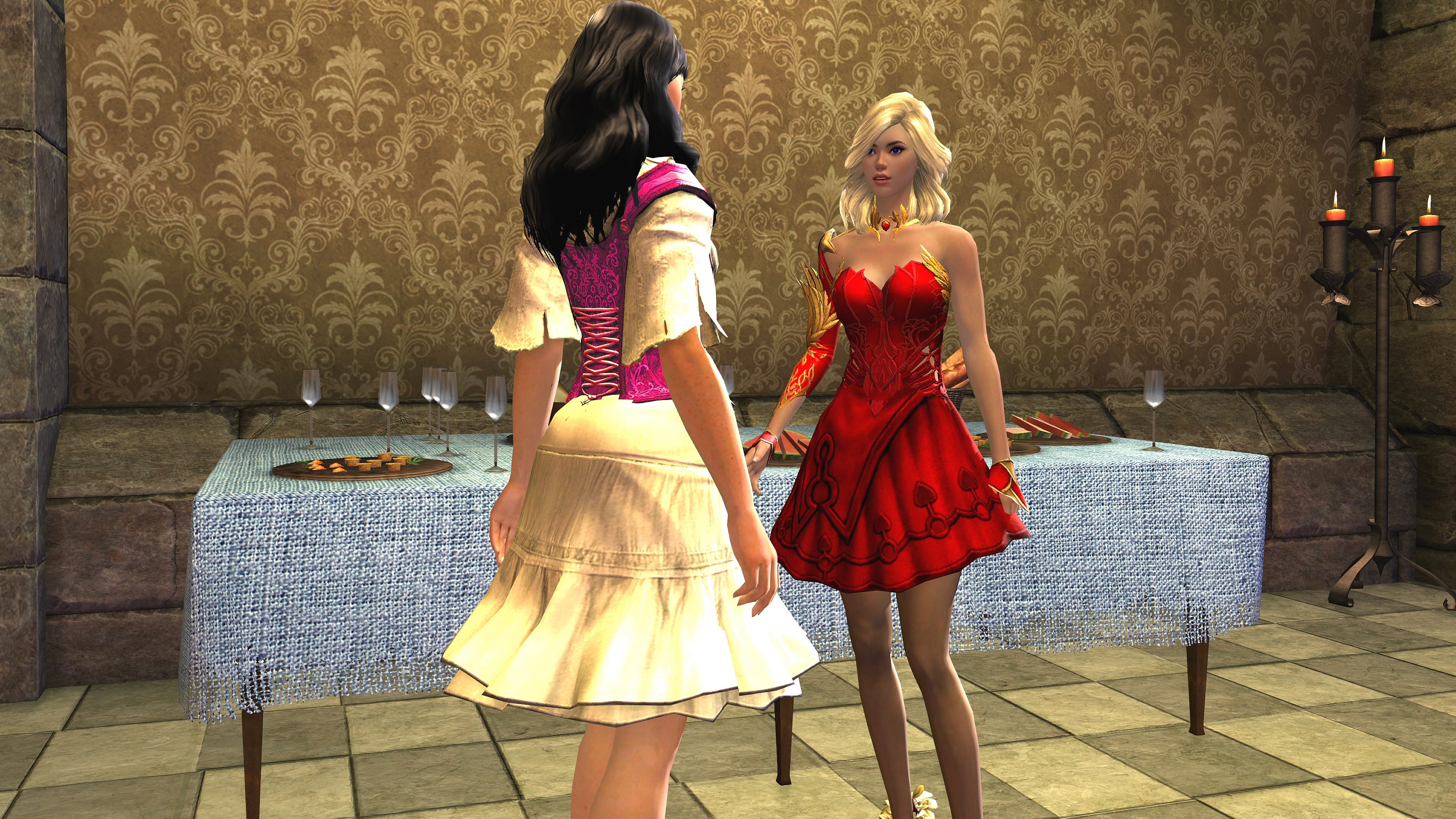 [spoiler] An “I Dream of Jeannie” CosPlay for the Maguuma Wastes, areas with dust storms, and the more "upscale", highly civilized regions of the desert (such as Vabbi). Note both the traditional Aladdin Lamp and the “I Dream of Jeannie" bottle in the picture! 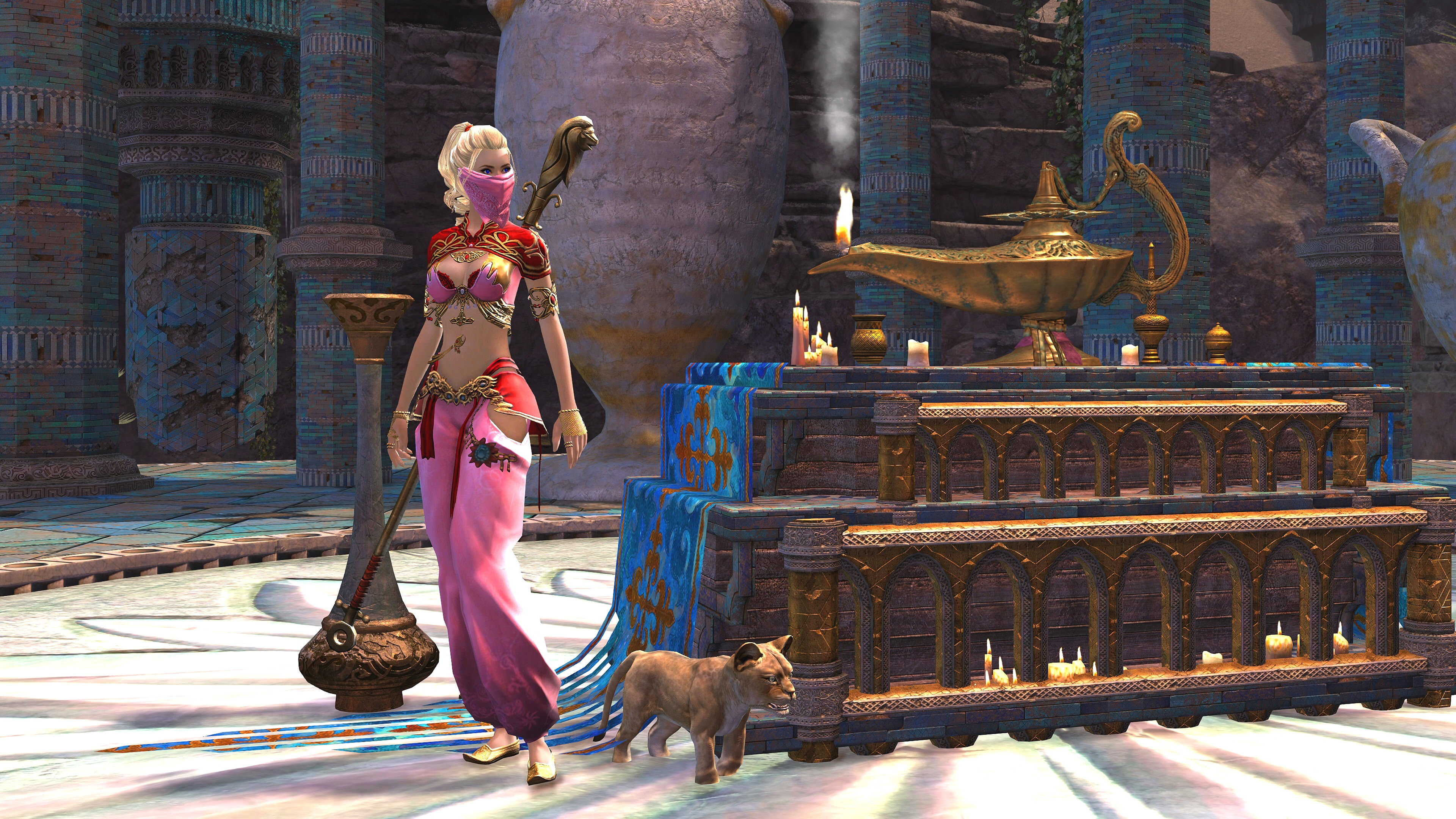 [spoiler] For the “Pirate” zones of Kryta, including Lion’s Arch. 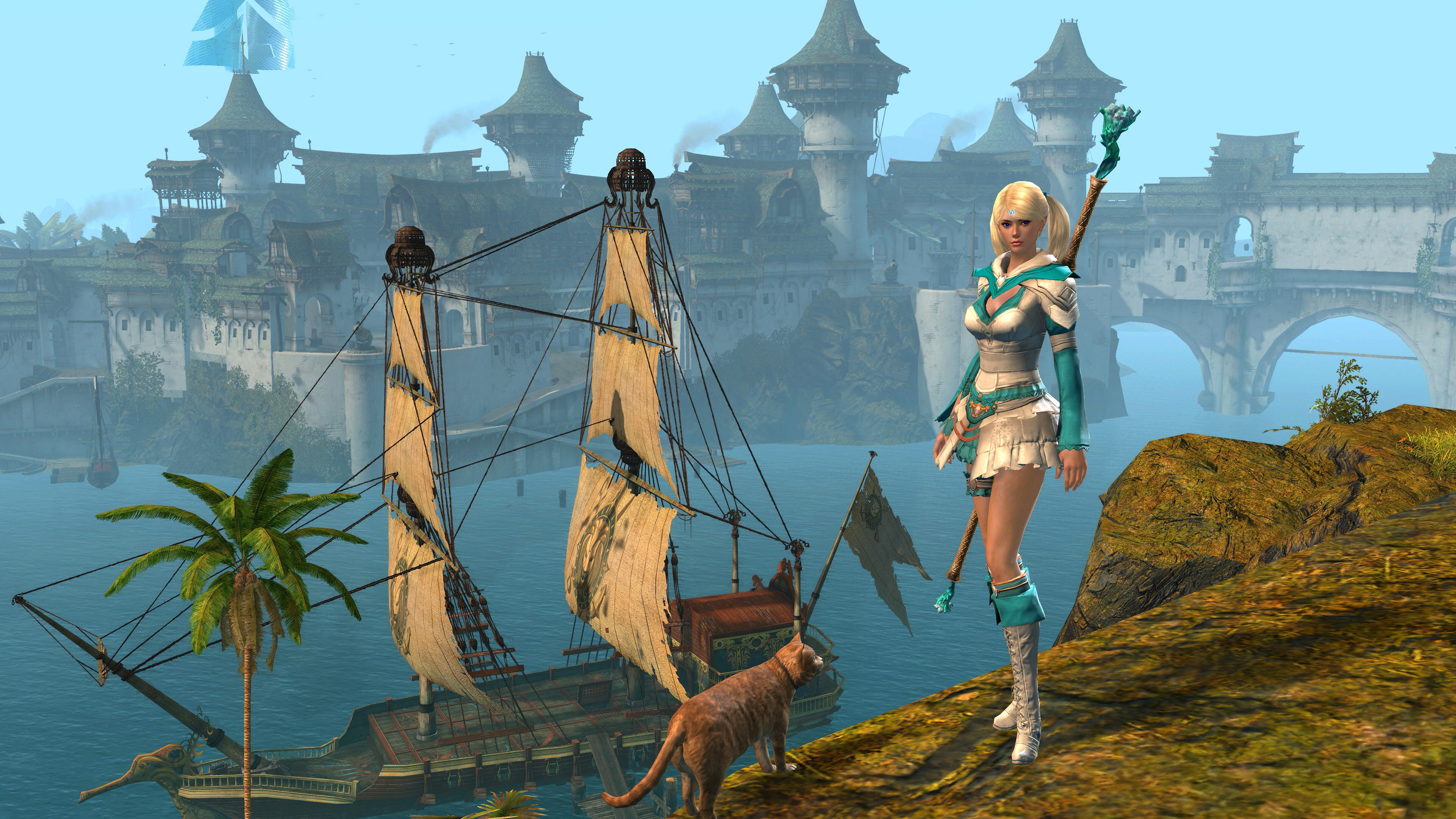 [spoiler] Reserved for Asura zones and the Durmand Priory (where I am one of their head people. Get it? HEAD people? Scholars? ...Never mind). 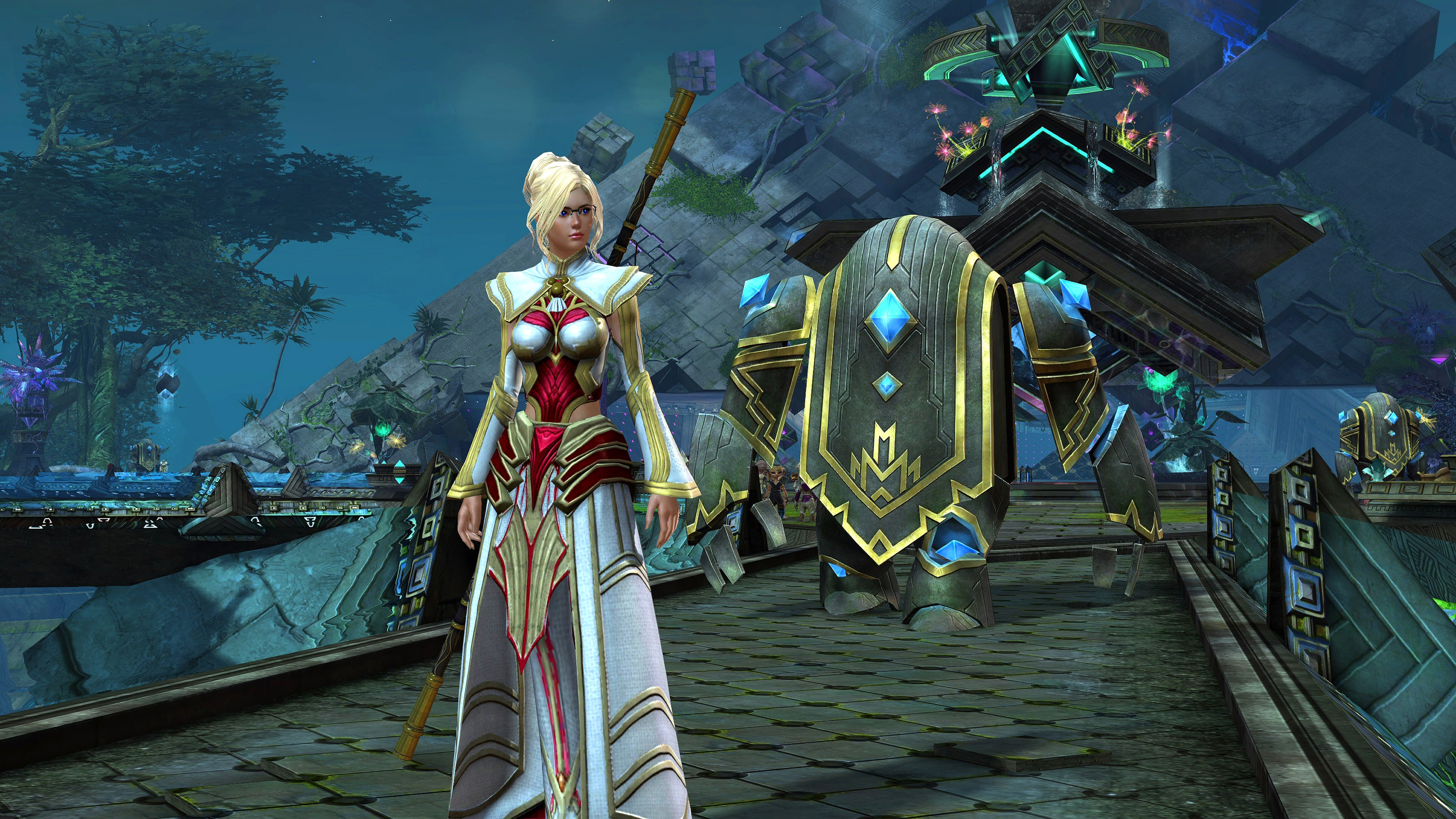 [spoiler] My prime Tempest look – used at World Boss events and anyplace I want to project the aura of a powerful wizard. (Like here at the heart of the volcano). 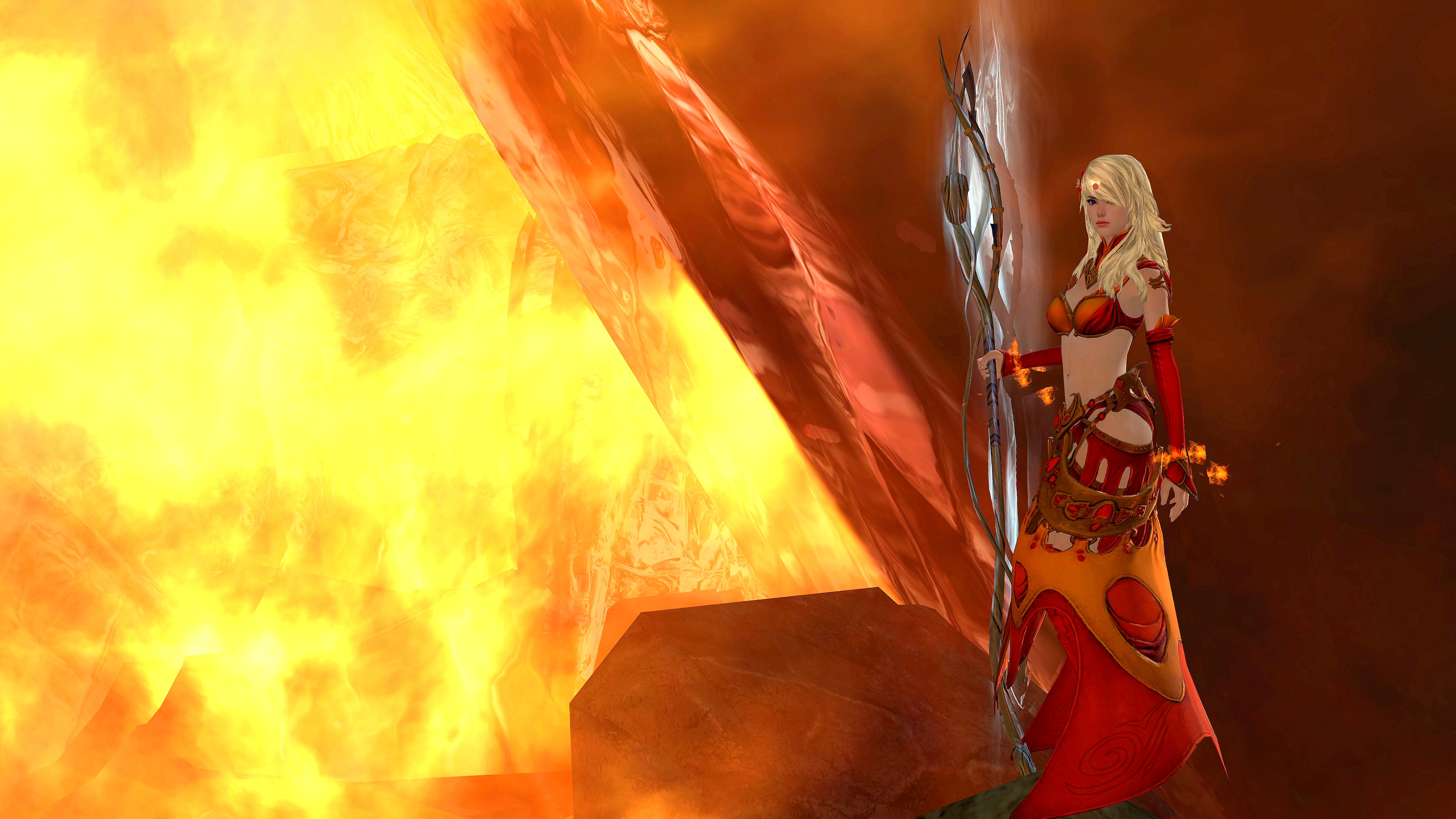 The human light-armored female definitely has an advantage as far as range of available armor pieces. But don’t be discouraged if you play something else! ALL of my characters, even the least-played, have AT LEAST two full sets of armor (one for warmer weather, and one for cold).

I’d love to see what looks YOU have come up with for your race, sex, and armor weight! Let's see some screen shots of your character in settings wearing scene-appropriate gear!