Just done several quests, world bosses and some WvW and got an idea of a possible activity/mode: "PvEvP" or "PvEvPvE" (Have to find a better name), it basically oppose 2 camps/factions that can claim quests to fight the other camp/faction. It implies two opponents: "Allies" and "Foes" in the sense that a faction incarnate baddies and the other ones allied forces.

The map itself is a giant fractal, once the cycle is finished, another one take its place, the opponents change. Everything reset. Players are put the most equally in the two camps, randomly.

The main characteristics, very rapidly:
-It uses mechanics from several modes: quests from PvE, siege engines from WvW, capture-able points from PvP....
-10 quests on the map: 3 types possible: Support-Defensive-Offensive, obligatory 2 of each type generated, the 4 remaining are random (can be 4 support like 2 Defensive and 2 Offensive)
-Siege engines disappear after 10 mins if non-used, fortifications stay until destroyed. No squad can be created if the previous generated one isn't attributed anywhere.
-The map outlook change every week, and the two implied factions too; resetting all progress.
-A faction win once the opposite HQ is destroyed, it can be destroyed by producing Demolition team/Racial weapons. (Doing that reset the same map to zero)
-Support quest is completed by everyone from your faction and progress slowly, 1% per action done. Repeatable 5 times, so 5 tiers for each quest.
-Supplies used by Offensive and Defensive quests are ONLY produced by Support quests at a regular time interval once the 1st tier is reached.
-Nobody carry supplies, you have to ask the support quest npc to give you a 5 supplies caravan to lead at another quest camp (Offensive/defensive) to upgrade it.
-Higher tiers unlock faster supply production, stronger weapons and defenses. The blueprints here are different than the one in WvW and are soulbound.

Factions Implied:
Lion's guard and citizens VS Aetherblades, Molten Alliance and Toxic Alliance
Norns and Kodans VS Sons of Svanir and corrupted creatures
Asuras and peacemakers VS Inquest
Sylvaris and Valiants VS Nightmare Court
Humans and Seraphs VS Bandits and White mantle
Charrs legions VS Flame legions
Elonians VS Awakened
Pact VS Dragon minions
Pact and Lion's Guard VS Twisted watchworks and Steam creatures

Quests types and tiers:
Note for defensive: you can use your WvW blueprints only once you reached the corresponding tier in one of the defensive camp. (Would appear as a buff)

Upgrading: by completing the quest. (Bringing there wood logs, ley line crystals, metal scraps: Infinitely available ONLY in your HQ, players have to carry them there)

(Note: It produce blueprints, you need to invest then the regular amount of supplies of the corresponding siege weapon in WvW. Racial require 2x more than golems.)

Limits about weapons present within the map etc:
Per Allied quest camp: 4 Veterans Guards, 4 fortification walls, 8 arrow carts or balistas, 3 catapults or trebuchets, 3 force fields or golems, 8 traps or mines, 1 racial weapon.
Per Enemy quest camp: 4 Infiltration Squad, 4 Assault Squads, 2 Bomber teams.
On the enemy HQ: 2 Demolition team and 2 Assault Squads.
Each faction can place 25 fortification of any type maximum outside of camps. And 15 Veterans guards outside of camps.

Mechanics:
Only one squad can be produced at a time, once done, its appear in the center of the camp, with a squad leader, you can talk to him and assign the squad in the available spots:
In the camp (veterans guard), at an enemy camp (Infiltration/assault/bomber) , at the enemy HQ (assault/demolition) or following you somewhere you need them. (veteran guards/bomber).
Fortifications/siege engines are purchased using the supplies stored in the corresponding camp. Nobody have its amount of supplies, everyone use the camp one.

Some easy explanations: You don't know anything about the map which is a giant fractal changing each week. On the minimap you only see fog. Only POI, services, vistas and HQ location are present as icons. The quests appear once you discovered them: 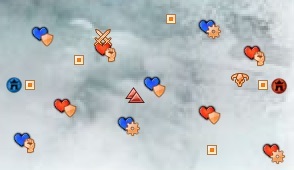 Example map. Gear = Support Quest, Shield = Defensive Quest, Fist = Offensive Quest. Castles = HQ.
Blades= like in WvW, under siege. Boss Icon= Demolition team or Bomber squad.
NOTE: The enemy can reclaim a quest by killing every NPCs within a quest camp, and knocking down the Quest NPC. The tier is conserved, but the affiliation is changed. 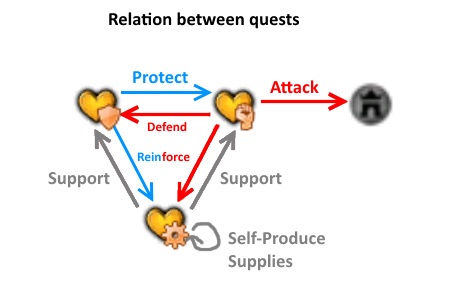 Note: by opposition of other weapons, a player can ask them to follow him where he want, then you can switch back to attack mode, and use it like a regular WvW siege weapon.

That's it, I don't have anything else to expose, it's just an idea and I concede, I don't have any faith in it, just wanted to share it there. Imo it would need some tweaks and many many works to be created/implemented, maybe wasted resources. It can be fun, rewarding each time you complete quests tiers, killing foes etc fractal relics and Skirmishes tickets.
But again seriously, I don't know, and will accept any opinion as long as it point out solutions, issues or whatever aspect.