Who is this guide for?

I starting conceptualizing this guide after hearing countless new players feeling lost, or even not unlocked a single Skill or Specialization because they feel overwhelmed with their choices, and the perceived scarcity of Hero Points. Hence, I wanted to give some structured path of Skill and Specialization unlocks, for those that desire it. The builds I recommend will mostly mimic those seen on endgame guides, such as Snowcrows and Discretize, which I hope will help ease players into harder content as their characters progress. Along the way, I will also explain the core concepts of the builds, both to help players understand the strengths (and weaknesses) of the build, and to better understand damage rotations when they eventually reach endgame content.

The Rule of Thumb is Power builds are better than Condition builds while leveling.

This is due to the low health pools of most enemies your character will face while leveling, and the propensity for Power builds to burst these enemies down far quicker than relying on damage-over-time attacks.

Furthermore, the damage scaling of Conditions rely on Expertise and Condition Duration, both attributes that aren’t easy to come by while leveling, or are very cost inefficient to gear for (e.g. buying specific runes and sigils). Conversely, Power builds have easy access to the attributes they rely on, i.e. Power, Precision, and Ferocity.

This is not to say it is impossible to level with Condition Damage. Throughout my guides, I will try to provide my best take on such builds for each profession.

When defeating an enemy, your character gains experience ("XP"), which is needed for them to progress in character levels. However, shortly after an enemy is spawned into the game world, they will start accruing Bonus XP that will be awarded to the character(s) that defeated them. Following this logic, you will often gain the most Bonus XP from defeating enemies not associated to Heart Quests and Events, such as neutral wildlife outside of the common paths players take while leveling.

In the figure below, you'll see that the Plains Worm Hatchling that had just appeared gave its base 20 XP to the player character. In comparison, the Brackish Skales nearby gave nearly twice the total XP when defeated, whereas the Bandits ten steps to the East gave over three times the XP of the Hatchling, despite taking approximately the same time to defeat.

You can speed up your leveling even more by activating one or more Experience Modifiers. For example, a fresh free-to-play character could increase their XP gain with the following:

Other non-Gem Store XP bonuses include:

As an example, stacking all the above can yield big jumps in XP gain, as demonstrated in the image below. 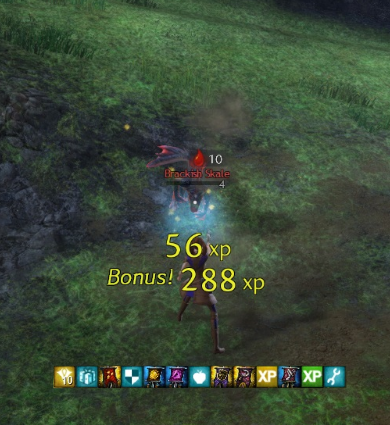