[Elite Spec Suggestion] Legacy of the Assassin: Powers of Shadow and Steel

This is my refreshed idea for how a thief elite spec patterned after the Guild Wars Assassin might look. To fit it within the context of GW2 and the existing thief specs we already have, I've focused on some specific playstyles of the old class: the frontline fighter and the shadowform tank. I've also added on the theme a bit, reflecting a possible evolution of the class throughout time and giving it more of a niche, by expanding the concept of the Assassin's hexes into a thief class that's more comfortable using magic offensively. I'm not really sure if this disqualifies this spec from still being called the Assassin, plus players of assassins in other games might get the wrong idea about the spec, but I've tried to carry the spirit of the original profession over.

This spec features a playstyle echoing the Assassin's attack chains and gains durability through barrier and other forms of damage mitigation. Offensively, it gains more mid-range and area skills. This spec has options to debilitate enemies or support allies. It's also been inspired by Anet's recent trend of adding traits that can alter specific weapon skill slots, which I use here to upgrade what is normally the Dual Wield skill slot.The trade-off is a new (different) resource restriction, less front-loaded burst, and compared to Deadeye: less focus on single target damage and advantage from stealth.

Initiative splits in half into 6 initiative, and 6 introspection. Introspection regenerates independently of initiative but the rate is unchanged. Weapon skills 4 and 5 now cost introspection instead of initiative. Traits in core specializations that modify initiative are unchanged but are still useful for weapon skills 2 and 3. Lore-wise, the assassins were described as being dedicated to balance, so here introspection is the yin to initiative's yang. Even though the spec encourages varied skill use, since one pool can regenerate while the other is being used, downtime between chains shouldn't be too long.

The new addition to the UI tracks the attack chain, which is progressed by alternating initiative-spending skills (weapon skills 2 or 3) with introspection-spending skills (weapon skills 4 or 5) and Dual Attack skills (new flip-over for weapon skill 3, see below). Only successful strikes build attack chains and spending the same type of resource twice in a row will break them. The state of the current chain is displayed using symbols like the slash/crosses of the old attack chain, as three stages corresponding to the number of attacks used in the chain. Skills will still be able to be used outside of chains, though using the same type of skill multiple times in a row will be more limited due to constrained resources. As the spec tree is fully trained, weapon skills gain additional bonuses when used in attack chains. 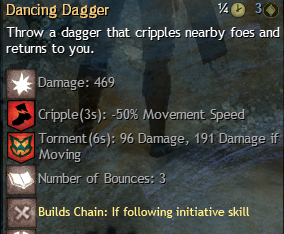 Example tooltip of an introspection skill following an initiative skill. Gives direction by stating whether the skill will start, build, or break the current attack chain.

When the attack chain reaches Stage 2, skills in weapon slot 3 flip into a resource-free Dual Attack. This affects both Dual Wield skills and weapon skill 3 on individual and 2-H weapons, so attack chains work with any weapon on land or in water. Similar to what ANet did for Deadeye's stealth attacks, Dual Attacks can be based off the existing Dual Wield/weapon 3 skills but deal increased damage and could have additional effects. Flavor-wise, like how Weavers combine elements into their Dual Attacks, these skills are created through both initiative and introspection and represent the infusion of magic into physical attacks.

Since attack chains just encourage the use of existing skills in a different way, this is the new addition to the class mechanic. Part of it was described above as the attack chain symbol, which is actually its own F3 button. While Steal still exists at zero chain, activating F3 during a chain expends the current attack chain to alter F1 into an Assassin Art, and depending on the stage of the chain and sequence of weapon skills, 1 of 5 different Assassin Arts can be created. These skills share Steal's traits but can have different properties such as range, movement, max targets, activation time, and possibly cooldown.

= Art 1: [Shadowless Step] - Clear conditions and dash out doing a small amount of damage and a blind. Can control movement with directional input (like dodge) resulting in different animations, e.g. jump backwards projecting a blade, a cutting dash forwards, etc.

= Art 2: [Flying Blade Storm ] - Project 3 summoned blades forward into the target that pierces directly in front and behind. (Strongest single target burst of the Assassin Arts.)

= Art 3: [All Directions Assault] - In a blur of motion, evade attacks and deal damage in an area around your target. (For AOE burst, and unlike Rev's sword 3, doesn't get stronger against single targets.)

= Art 4: [Seal of Deadly Corruption] - Conjure a circle of magic centered around the target creating an area that immobilizes with the first pulse and remains for a short time doing damage. (Total damage over time should exceed the burstier Assassin Arts.)

= Art 5: [Way of the Master] - Self-buff that blocks during the animation and adds extra strikes to your next few attacks.

Thematically, since weapon skill 4 and 5 are usually more control or defensive oriented, attack chains starting with introspection skills result in more defensive Assassin Arts with lower single target damage. I didn't want to step on Daredevil's toes by giving too many evades, so each defensive art does something different. (Blind+positioning, evade, or block.)

Visually, dual swords are a pretty good match for the old Assassins' daggers since they didn't hold them in reverse like GW2 Thief does. Also, both previous specs gained 2-handers and having to only add two new skills for an offhand balances out the addition of all the new Dual Attack and Assassin Art skills.

Inspired by the Guild Wars description of the Assassin being " nowhere and everywhere all at once." Shadowy phantasms look visually different from Mesmer phantasms of course, but will also differ by not leaving behind clones when their effect ends. A few of the phantasms with longer animations also have flip-over skills that act as a pseudo-shatter, ending the skill early in exchange for immediate and alternate effects. If the phantasm was manually shattered but would have applied boons upon ending, the duration of the boons transferred to the player scales with the length of time the phantasm was alive.

[Way of the Assassin] - You have balanced both mind and body by learning the old ways of the Assassin, splitting part of your initiative into introspection. Build attack chains using varied weapon skills for bonus effects and spend attack chains to alter Steal into Assassin Arts. Gain access to Dual Attacks and phantasms.

[Unseen Fury] - Blinding a foe causes your attacks to be temporarily unblockable. Has ICD.

[Shadow Sanctuary] -Allies gain a portion of the barrier you grant yourself. Gain increased healing power when granting barrier.

[Shadow Form] - Reduce incoming strike damage while you have barrier.

[Mind of No Mind] - Phantasms give full attack chain bonuses to your next Dual Attack.

[Way of Perfection] - Way of the Master changes to Way of Perfection, which now lifesteals. Assassin Arts grant their benefits to nearby allies. (Includes the boons granted by the grandmaster minor, allowing this spec to focus on an particular Assassin Art to upkeep quickness OR alacrity but unlikely both.)

_
*Edit 7/23/19: Switched some traits around. Changed the second adept minor trait to give healing power instead. I still like the idea of boon duration for this spec but I didn't catch that Deadeye and Acrobatics already have traits that give concentration. Healing power would be a first for the thief and would work well for the barriers and lifesteal.

*Edit 12/31/19: There was a change to the forums that messed up the image formatting and I couldn't let it go. Took the opportunity to make some changes: Flipped interaction of F1 and F3 to create a tradeoff between Assassin Arts and Steal. Changed attack chains to build off of resource type because it's more intuitive and allows a greater variety of skill combos to access the Dual Attack. Changed Art 1 to condi-clear more than just movement-impairs. Strengthened the Phantasm theme of the utilities a bit by introducing flip-over "shatters." Renamed/moved some traits around to allow some variety between potential healing and tank builds. Clarified images/wording.