The world is finally safe from the dragons. Three of them are no more, two went back to their slumber, and the sixth has never been heard of. The races of Tyria can finally prosper in peace.

A soothing calm falls upon the world. The calm before the storm.

Living World Season 5: The Calm and the Storm 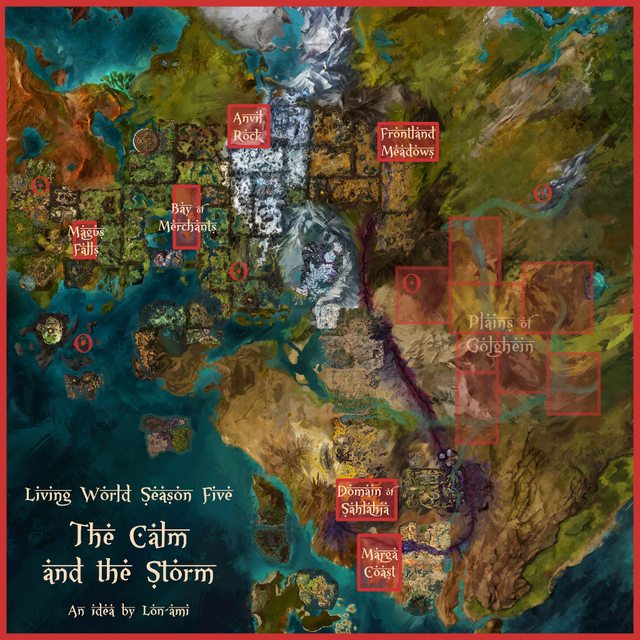 Episode 1: The Face in the Locket

The Krytan royal locket. An ancient artifact holding the secrets of Kryta's royal bloodline. Kept safe inside the Wizard's Tower, but for how long? A crew of undead pirates, now free from Zhaitan's control, longs for the good old times, and in their folly, they might unleash a crisis in the heart of humanity itself.

The fires of Maguuma lie still, long after Mordremoth's demise, but the embers of destruction bide their time, hiding among the shadows, yearning to rekindle the fire and engulf the Dream of Dreams. There was one destined for greatness, born to rise and become the Harbinger of Nightmare. And at long last, he has been found.

Episode 3: Dawn of the Golden Sun

The power vacuum left after Joko's downfall continues to wreak havoc across the peoples of the United Kingdom of Elona. The dust long settled, many start to question the actions of the first Commander of the Pact. Was the confrontation against Balthazar necessary? The death of the war god only brought forth further death and destruction. Kralkatorrik was spared, only to be confronted once again shortly thereafter. The actions of the commander only delayed the inevitable, ravaging Elona in the process. Were Joko's accusations right all along?

Episode 4: Twilight of the Fallen Gods

The Order of Whispers was founded to defend Elona from Palawa Joko, yet eventually, the order grew and shifted its attention to other bigger threats, far beyond Elona. This distraction proved fatal, for when the lich returned, they were unable to defend their own homeland from his invasion. This critical defeat splintered the order in half, leading to the foundation of the Order of Shadows. Determined to focus on Joko alone, they were quick to bolster their ranks. The truth behind their ascension, however, lied in none other than one of the darkest chapters of the Ossan bloodline.

Two centuries ago, the dwarven race sacrificed itself to stand between Tyria and the Elder Dragons. Turned to stone by the magic of the Great Dwarf, they waged an endless war against the destroyers. Eventually, their numbers started to dwindle, for even the sturdiest stone could only hold on for so long. The fallen could never be replaced, but maybe, one day, they could be reforged.

Humans and charr have waged war against each other for centuries, but everything changed with the rising of the Elder Dragons. Former enemies were forced to unite against the larger threat to survive, leading both races to sign the Ebonhawke Treaty, beginning a new era of peace and cooperation. But old hatreds don't die so easily, and with the dragons on withdrawal, the flames of war loom over Ascalon once again.

The ghosts of Ascalon remain free from their curse, but their spirits still plague the land. No longer enslaved to the will of their king, they're now free to do as they please. Many cower in horror, unable to cope with their fate. These ones were easily dispatched, and with the curse broken, they would no longer return. The rest, however, remain determined to take revenge on the charr. No longer a mindless army, they turned the war upside down, driving the Iron Legion to its limit.

Further east, the armies of the Blood Legion march to war. While the Iron Legion lies in shambles, their gaze has turned south, to the lands of the Ash Legion. Imperator Bangar Ruinbringer has claimed the title of Khan-Ur, and plans to subdue all legions under a single banner once again. Multiple warbands have switched sides during the crisis, and tensions are at an all-time high. Lord Jadoth, First Follower of Abaddon, continues his quest to shatter the bloodstones. His current whereabouts are unknown, but suspected to intertwine with the fate of the charr.

Both Rytlock Brimstone and Logan Thackeray were last seen fleeing from the site of the ritual. Rytlock is now considered a fugitive, blamed for the disaster by the Iron Legion, and accused of defection and sorcery by the Blood Legion. Logan's disappearance has left the Pact headless in the middle of the charr crisis, right when the neutral stance of the organization is being questioned. The first Commander of the Pact has relinquished the title, and is rumored to be rallying volunteers in support of the Ash Legion, mustering an army near the mountains of Dzalana, north of Elona.

Further west, many voices question the decision of the Pale Tree to reintegrate members of the Mordrem Guard into sylvari society, the wounds of the Pact campaign against Mordremoth still far from healed. Right next door, the Arcane Council has approved mass-production of war supplies for the warring charr factions, their greed overcoming the most basic of common senses. North, the norn frown upon the return of the dwarves, now reeking of dragon magic.

Years of peace and cooperation among the races of Tyria have been laid to waste, and the High Legions themselves teeter on the brink of destruction.

If Ruinbringer is not stopped soon, the flames of war will spread and engulf the world.

The story continues in the third expansion of the game: Guild Wars 2: Brothers in Blood. Journey into the Plains of Golghein, and repel the Blood Legion invasion into Ash Legion territory. Explore the ancient ruins of forgotten and jotun civilizations, find the truth behind the bloodstones, and stem the tide before the magics of the world spiral out of control.

That's all of it, thanks for reading!

Latest thread: LIVING WORLD SEASON 5 - THE CALM AND THE STORM