Halloween is fast approaching and Crows Roost [CROW] will be hosting a series of games and events on Saturday October 26th within our guild hall! There is a guild limit of 500 members so don't miss out! Why host in the guild hall? While it would be fun to play with the general mob Tyria has to offer, playing in the guild hall allows for enforcement of game rules and utilizes decorations for many of our games! Come join us and try to win some prizes! 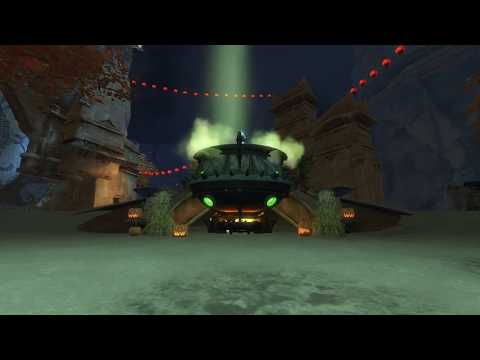 Spooky Musical Chairs
Don't be left standing when the music stops! A classic game with a Halloween twist as our chairs will be floating! There will be spooky chairs that cannot be sat in mixed with the regular chairs, so beware! Floating chairs and players will eventually be reduced to one for the prize!
Rules:
*Participants gather near commander. When the entry is opened the game begins!
*When the commander's music stops you must be seated in one of the specified chairs or you're out!
*You must move in a circle. Those caught idling by a chair will be disqualified.
*Chair interference from other players get removed from guild.
*The last player sitting earns a prize!


Jumping Puzzle
A good, old fashioned spacebar masher for all to enjoy! Jump your way to frightening heights!
Rules:
*Participants gather near commander to begin.
*No mounts, oak essence, teleport to friend, Djinn teleports, etc. permitted.
*The first player to the finish receives a prize!


Raptor Race
Leave the competition in the dust and be the first to cross the finish line! This race uses the same course as the beetle race but using raptors allows more people to compete!
Rules:
*Participants gather near commander and join squad- first come first served!
*A raptor mount with jump mastery is required.
*Taking obvious shortcuts gets you disqualified.
*No other mounts, oak essence, teleport to friend, Djinn teleports, etc. permitted.
*The first player to finish receives a prize! (There may be multiple races, in which case you may only win once)


Mad King Quaggan Costume Brawl
Become the true mad king quaggan! Gather your forces and destroy the enemy imposters in this four-way team costume brawl!
Rules:
*Participants gather near commander and join squad- first come first served!
*Participants will be separated into four groups, each with their own quaggan color tonics.
*One king will volunteer/be chosen from each team and be given an endless mystery quaggan tonic, using until becoming Kookoochoo.
*Each quaggan king will be color marked in squad matching their team color.
*Regular quaggans may keep fighting once KO'd, but if a king is KO'd their whole team is out and must use "return".
*Attacking team members is permitted. Take advantage as king... and be paranoid. kek
*Obvious interference from defeated teams or outside forces will be booted from guild.
*Last remaining team's members all win a small prize!


Arena Free-For-All
Fight to the death! Bring your OP class or gang up on one! Be strategic, be opportunistic, but most of all be brutal! If I sense it's a stalemate tank match I'll start spamming turrets! Many will enter; few will live!
Rules:
*Participants gather near commander and join squad- first come first served!
*Participants will be randomly separated into groups.
*Group one fights first, then group two, etc.
*Interference from players will be booted from guild.
*The winner of each group remains in squad while others get removed. Survivors of each group then face off for the prize!


Scavenger Hunt
This is a Halloween themed guild hall- not a place for Wintersday nonsense! So I've decided to dispose of the three giant Wintersday gifts where nobody will find them... Though if you find them I suppose you'll win a prize.
Rules:
*Participate from anywhere in our guild hall map.
*Each giant Wintersday gift has a statue which provides a code.
*Starting NOW the first to post here any of the three codes wins a prize!
*One winner per gift/code.


Trivia
Test your knowledge of the Halloween festival and our guild hall!
Rules:
*Participate from anywhere in game using the /g chat.
*The first to correctly answer within one minute wins a small prize!
*Spelling correctly is preferred, but as long as I can understand what you mean it's accepted.
*If nobody knows the answer then you bring shame to your family and I keep the prize!


Halloween Fashion Wars 2
Show off your style and creativity with your best spooky attire! While gem store outfits may look nice, keep in mind they lack originality!
Rules:
*Participate in the guild hall while the other games take place.
*The winner chosen by judges and announced at closing ceremony will win a prize!


Gold Raffle
A simple contest that will randomly pay gold to one lucky person.
Rules:
*To enter, simply deposit one gold piece into the guild bank treasure trove.
*The treasure trove will start with 10 gold and will be unavailable to withdraw from.
*Only one entry per person (so depositing 500 gold does not increase your chances).
*At closing ceremony a randomly generated winner from the list of names who deposited gold wins it all!


Closing Ceremony
A few "thank you" messages and general appreciation. Come for the awards and fireworks, banners, and feast buffs. Stay for my stunning good looks!


To join our celebration, send mail to Dhemize.8649 here on the forums or in game!