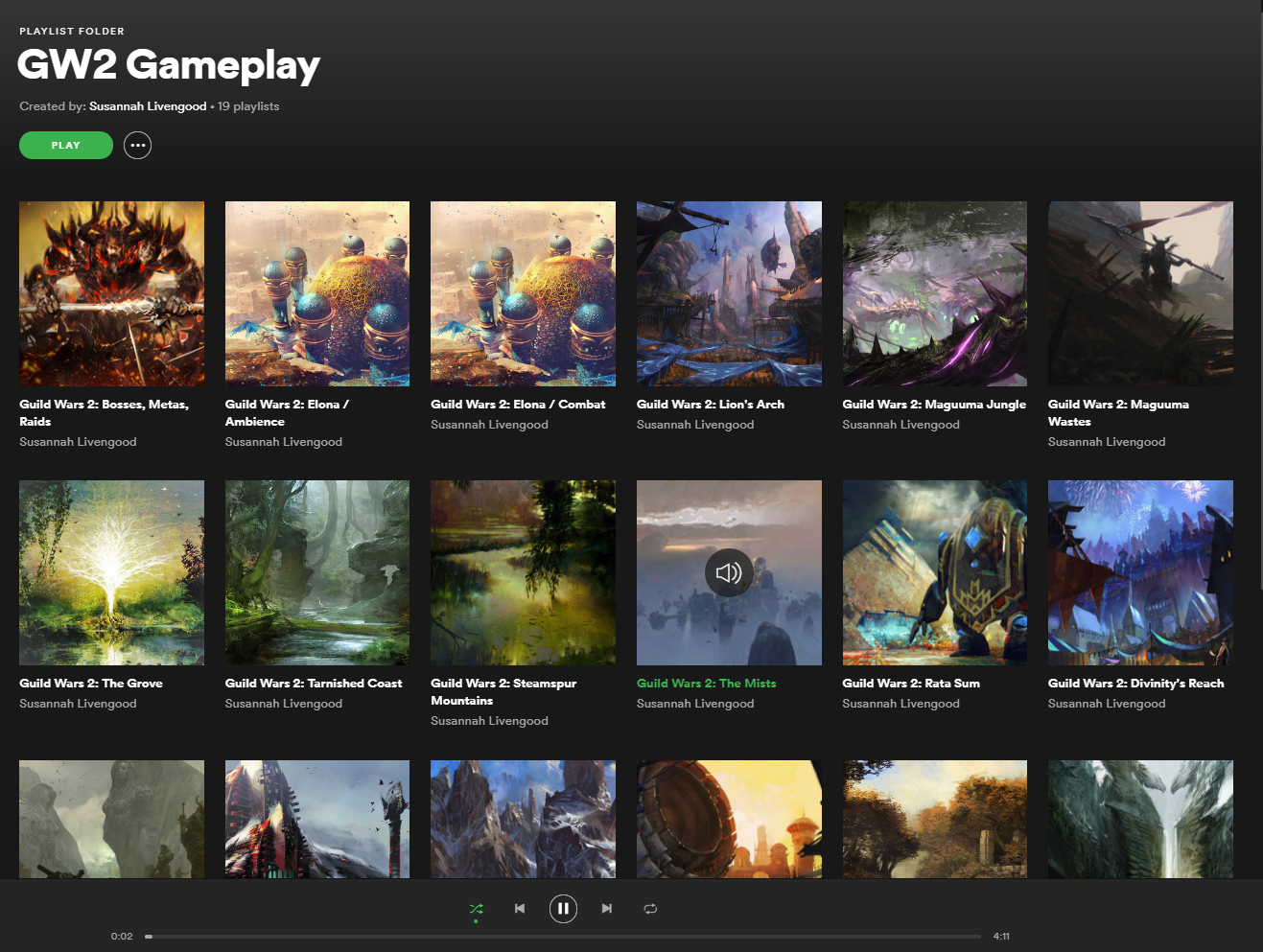 First of all, yes I know of the playlist feature that you can use in-game. However it's pretty crude imo. I don't want the same music for say Shiverpeaks and Elona? Nah fam, I'm a music snob with a love for immersion. Until such a time that I could figure out a workaround or better fix, so far I've spent the past years creating and solidifying a list of playlists for the game (if anything, a good archive/collection). This habit originally started in Guild Wars 1, where I used to use iTunes. As of now I have it set on Spotify. Depending if people find this useful, I could maybe spread it to other streaming sites; though Spotify felt like a good first stop.

May I make a statement that none of this music is produced or promoted by me in any way. The cover art is all from Guild Wars concept art, was taken from the wiki likely. Pretty sure it's safe to share this? I can't really claim any credit so you honestly can do what you want--copy this, remake 'em, whatever floats the goat. But all the tedious organizing/archiving has been done by me if you like my music choices. It's all a HUGE amount of immersion friendly soundtrack, game, classical, and even some electronic and rock. This at the end of the day is tailored for my needs and my views of the game/lore. That being said, if you have some music you think would fit in, throw it at me! And I'm sure there are mistakes, duplicates, etc. It's a continual work in progress and I am always adding and updating.
.
.
.
make sure you shuffle!

(Spotify simply won’t let me share the playlist folder where they all are, so I’ll have to link individually. Workaround: Follow the playlists and then simply make your own GW2 folder.)

Still in a WIP stage, not content with it. However, it is okay atm for world bosses and the like.

A bit more on the ambient/exploration side. Spanish guitar and pirates galore. I use it for Lion's Arch, Gendarran Fields, Southsun Cove, Bloodtide Coast, Sparkfly Fen.

I use this playlist for more action/combat in the above mentioned regions. Also Mount Maelstrom.

Ambient focused music for Norn, Shiverpeaks, related. I also have a variety of Native American music as well; underestimated inspiration for Norn (IMO).

Lots of 'cowboy western' themes--you'll like it or hate it. Sometimes a bit spooky and atmospheric to reflect the Foefire.

There is often a mix between extravagant songs, humorous melodies, and ultimately sinister undertones for Inquest shenanigans. Lots of electronic ambience and sci-fi. This playlist is less defined than others about its combat/ambience.

I use this playlist for: Drytop, The Silverwastes, Bloodstone Fen, Brisban Wildlands, Ember Bay

Whew, ok, done. Sorry, way too many words. Enjoy but no pressure. But if you do fancy it, let me know what you think and be sure to follow the playlists.