Well, this is the idea of fractal I got for a long time now, got it some yeas ago and never got the time to publish it there.

I warn you, quite huge wall of text incoming. 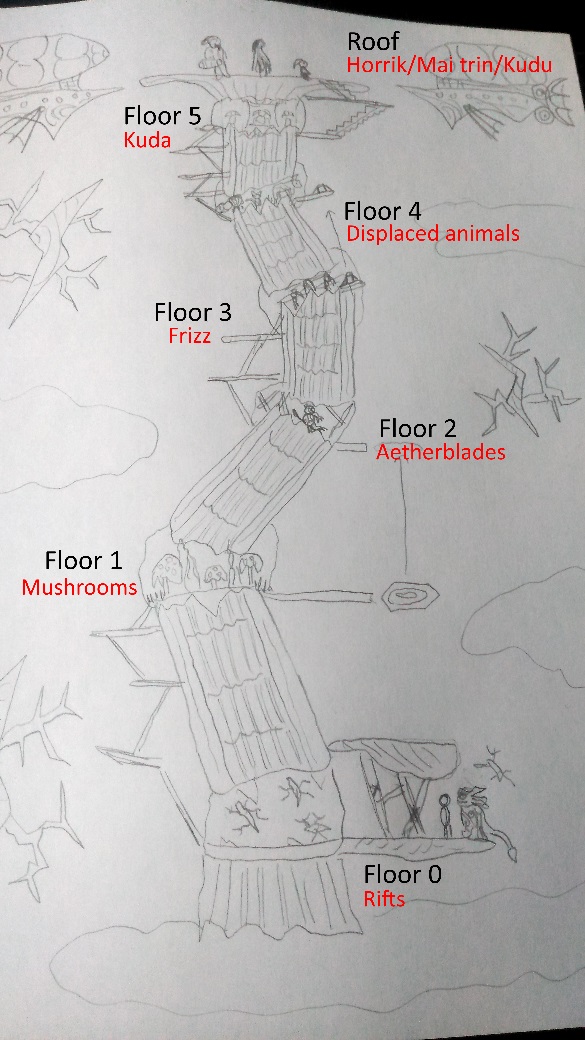 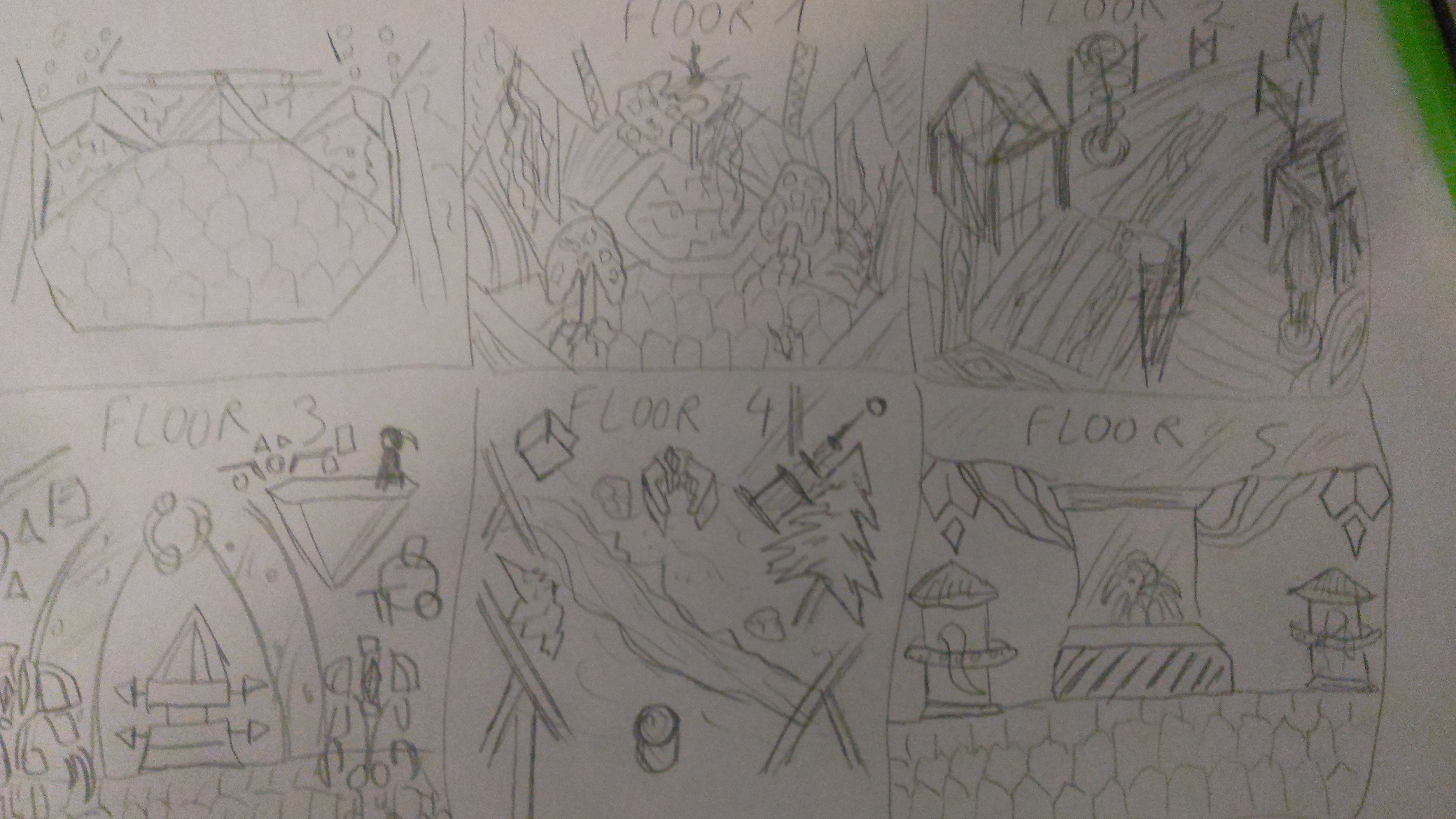 PLEASE READ THE WHOLE POST BEFORE REPLYING.
AND GIVE CONSTRUCTIVE FEEDBACKS
NO JUMP-IN TO NECRO THE THREAD

So. First at all, what's the main idea? It will make a link between rifts, auris, inquest, aetherblade and displaced animals. Also brings back some of the main foes of the past. (Not you Scarlet, you can stay where you are).

The look: It's a huge broken tower like dement clocktower, but bigger. At the middle of stormy mists. (Redish-grey clouds around like armageddon sky).
With crazy opening-closing rifts around it. The tower is caught in a strange storm where you see greenish-black particles moving from down to up.
Some rudimentary installations (rooms) link the part together: A pirate encampment, an inquest lab, an aetherblade hideout, a strange shroomy verdant cavern part and a huge octagonal operating platform at the top welcoming airships. It can also have islands of various environments floating around: Floating ascalon walls, some mountains parts, snowy pine trees....

So what's the path?
As usual, you teleport from Dessa's observatory, and guess what? Something gone wrong. All communications are interrupted, and the loading screen change from fotm to ??? loading screen.

You arrive at the bottom alone, but suddenly a rift open near you and Auris coming through it. He says: "What are doing there cub? Bah not important. There is something wrong with that tower. We should check it out."

Auris is your guide in that fractal. No dessa, she can't reach you where you are. You need an higher point to restore coms.

You firstly arrive in a small empty room in ruins, and instantly many rifts open bringing ton of displaced creatures: centaur, icebrood, spiders, hyleks, steam creatures....
"Event 1: Stop the rift invasion"
You have to kill the creatures for an amount of time while Auris stabilize and close the bunch of rifts.
After, you continue to pass through the tower to arrive on the other side to climb up using scaffolding.

Now the first floor, here you find shrooms like ??? in jahai, you try to pass through that room to continue your journey. But forcefields activate themselves and trap you with the shrooms. An hallucination start, a violent one. You see your allies (zojia, logan, rytlock etc....) as branded or awakened. Here start event 2.
"Event 2: End the hallucinations by destroying the mushrooms"
Some of the players had to focus on hallucinations, some on mushroom. Foes act like the ones for brand stomper in grothmar: They all want to interrupt players destroying mushrooms.
The better is 1 on shroom, 4 on foes.

Then, force field deactivates and you access an hexagonal elevator ala the test subject instance. You are now arriving at 2nd floor. The aetherblade camp. Here you catch Mai Trin speaking with Kudu. But they are rapidly noticing your presence and they teleport away. Note they have a buff "Stabilized class V" the others aetherblades here are "Stabilized class III" and some symply "Badly anchored": those disappear after reaching 50% health. They will be useful after....

An alarm start, and a public announcement is made. "Remember to always have at least a class III stabilizer on you! Personnel without it may experience electrocution, dizziness, agony, organ failures or death."

"Event 3: Carve a path through the aetherblades to access the upper levels"
You kill some waves of aetherblades while avoiding in fire cannon balls shooting in patterns.

You use again the scaffolding to reach floor 3. But this time some thunderbolts are hitting them randomly.

Floor 3. The Inquest station. Security supervision golems are present around the room. The room is quite large. And at the ceiling there is a protected observation platform with an asura on it. You also notice a familiar laser wires device at the center of the room.

Frizz: How!? You! How I can forgot you! I've learnt from my mistakes you know! No more insecurity! Time to spice things up! I will kill you this tike!
(Had Stabilized class IV, alternate timeline, where he escaped before the machine splatted him.)

"Event 4: Survive Frizz experiment"
Firstly golems have to be destroyed, one give boons, one protect, one strengthen, one heal. Have to be killed simultaneously cause Frizz can reboot them rapidly.
Second phase: Lasers phase.
You have to use emotes.
2 lasers one higher one lower.
For lower just jump.
For higher, use /sleep to put yourself under it.
Will go faster and faster, at the end only lower lasers I swear.
At a point a blackout happens, energy depleted. You have to destroy 5 consoles. Once it's done, the observation platform explode, Frizz dies.

A teleportation pad at the end of the room turns on, you can access floor 4.

Floor 4: Empty, full of confused animals, the room is snowy with a little river, you pass peacefully to access scaffolding to the floor 5.
Rifts open and close frenetically on the scaffolding if touching one of them you will have confusion and will lose some of health.

Floor 5: Containment cells around the room with specimen of each dragon minion. For Deep sea Dragon it's a horseshoe crab like creature.
At the middle kuda kinda unconscious, with some aetherblade scientists and Inquest technicians around cheering saying yes or no as emotes. Some are surprised. Two cower near a wall.
(Kuda is also in a bottica like containment pod).
Big explosion. All dead apart the two cowering scientists shown as allies.
Kuda have three buffs.
(Synchronized class IV, Synchronized minds, Synchronized Vitality)
She protects herself under personal force field and she is linked to the 6 experiments through particles. She czn control them.

"Event 5: Defeat Kuda"
First phase: Minions are in stasis, each time the fractal is played, those will awake in a different order. You have 2mins per minion to kill them. (Actually you will lower them all to 5% health).
Each minion will perform strong cone shaped attacks. And themed one: Adding fire, vines, frozen, poison, geyser, crystal prisons aoe.

Second phase: Kuda order all minions to launch a powerful attack. Go with Auris, he is creating a shield. Minions are now at 3% but determined and invincible. Kuda shield broke. Kill her and the minions are dead too!

The stone gate open, you can access the last floor using a well made asuran stairs with different type of turrets slowing down your progress.

Wow! Finally you're there! The last floor! The giant octagonal airport with its airships. Three persons at the middle, Horrik, Mai Trin and Kudu.

"Event 6: The true fight begins."
A clock is engraved on the floor. But no clock hands. A golelemite is bugging saying sometimes 97. This is an important point. 97 seconds after he say that, rifts appear all around the arena bringing in dragon minions, steam creatures, inquest and aetherblades, all of that badly anchored. They can fight each others, but they disappear 97 seconds after, to only come back 97 seconds after.
Phase 1: Horrik and Mai Trin
Kudu teleport himself with assistants on airships and shot regularly on the arena without caring of others.
Horrik now shoot head-seeking energy balls hunting players. Mai trin shot powerful prime laser beams. Both are protected by shield, shield removed if under airship shot. Horrik now also teleport randomly thanks to rifts using badly anchored at its advantage and can potentially avoid shot especially if coming from front of him. He also summons rotating mechanical axes.
Mai Trin can also block if she see the cannon ball coming. So both should be hit by cannons in their back.

Both are less stronger than in aether fractal and are fought simultaneously.

Phase 2: "Kudu"??
Nope, it's subject alpha, its metamorph ability gave him its appearance, the skills doesn't correspond to kudu, he is pretty weak but invincible: he rebuild himself each time. Players have to recover horrik hand-cannon, mai trin rifle, and a flamethrower within one of the crate of the airship to kill him by shooting simultaneously on him.

Phase 3: The real kudu.
(Buff: Piloting XTRM1N4TOR)
He isn't that hard too. He put himself in a small exterminator mark golem and can be defeated by bringing the core crystal out of it and destroying it.
Attacks are the following: Hand to the sky he shots electric projectiles around like the leader of infinity coil.
He also rotate creating flame around him. Finally he create shock-waves two hands on the ground. He pulls or knock down. Each 25% he stops, creating shield and calling for help, several aetherblades/inquests/bandits/nightmare court arrive through rifts.
But also animals only during non shield, he kills them to restore its life, once killed he throws them into rifts.

Once destroyed, kudu is stunned, lying on the ground wounded, you can finish him.

Dessa re-establish communication and bring you back asking where you are.

The end. This is the fractal of an alternate timeline, not the past or the present but the future of somebody else, somebody who played with space-time too much.