Well did some paths those last days, when I thought I was seeing strange things on the map like very discreet elements. I've decided to play with the luminosity and the contrast to investigate the map closer. Then I wrote an interrogation point on the areas still feeling suspicious. Magenta lines on the maps are condemned passages, red lines are condemned inquest stone gates, blue lines are force fields) 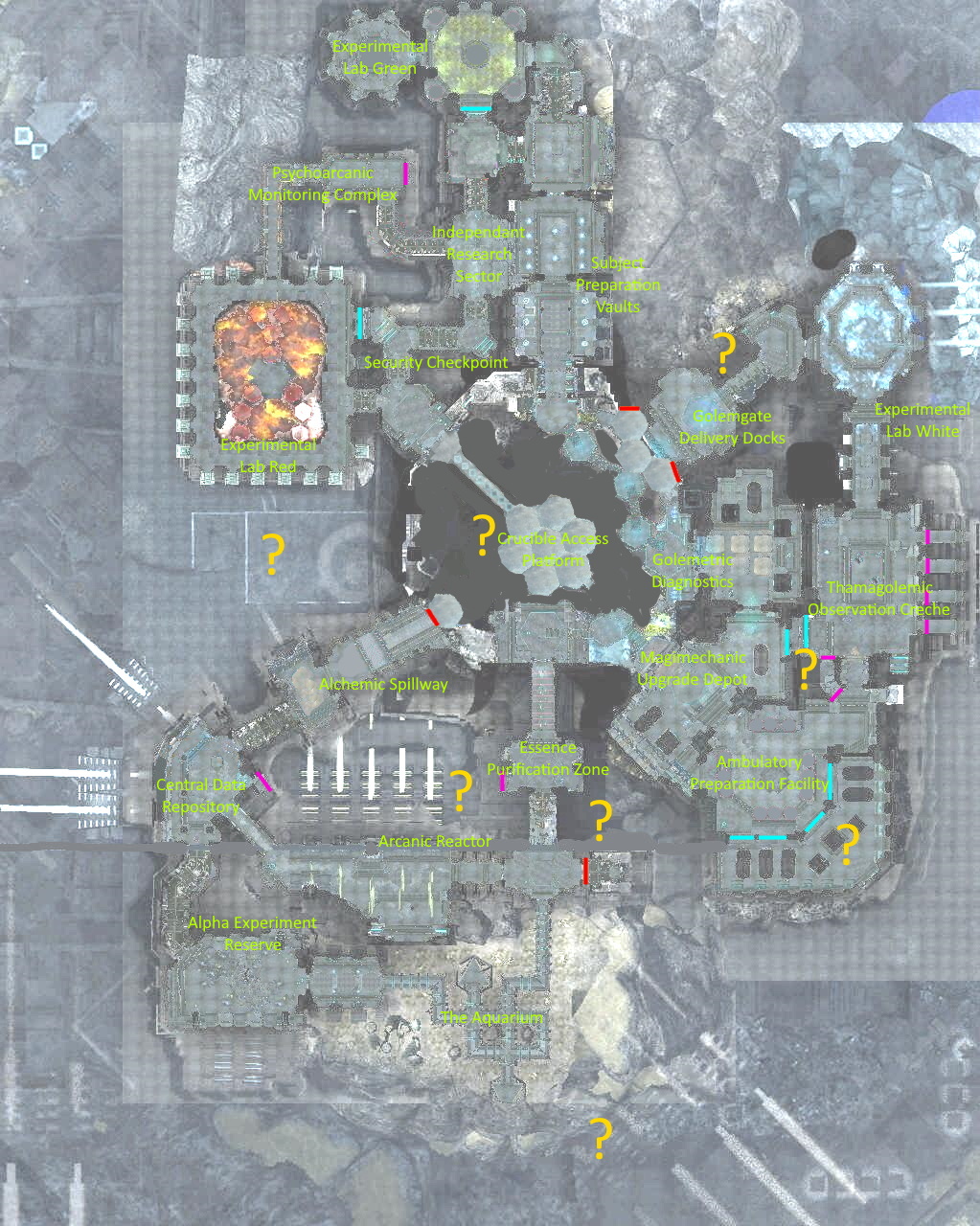 1-The link between Magimechanic Upgrade Depot and Thaumagolemic Observation Creche 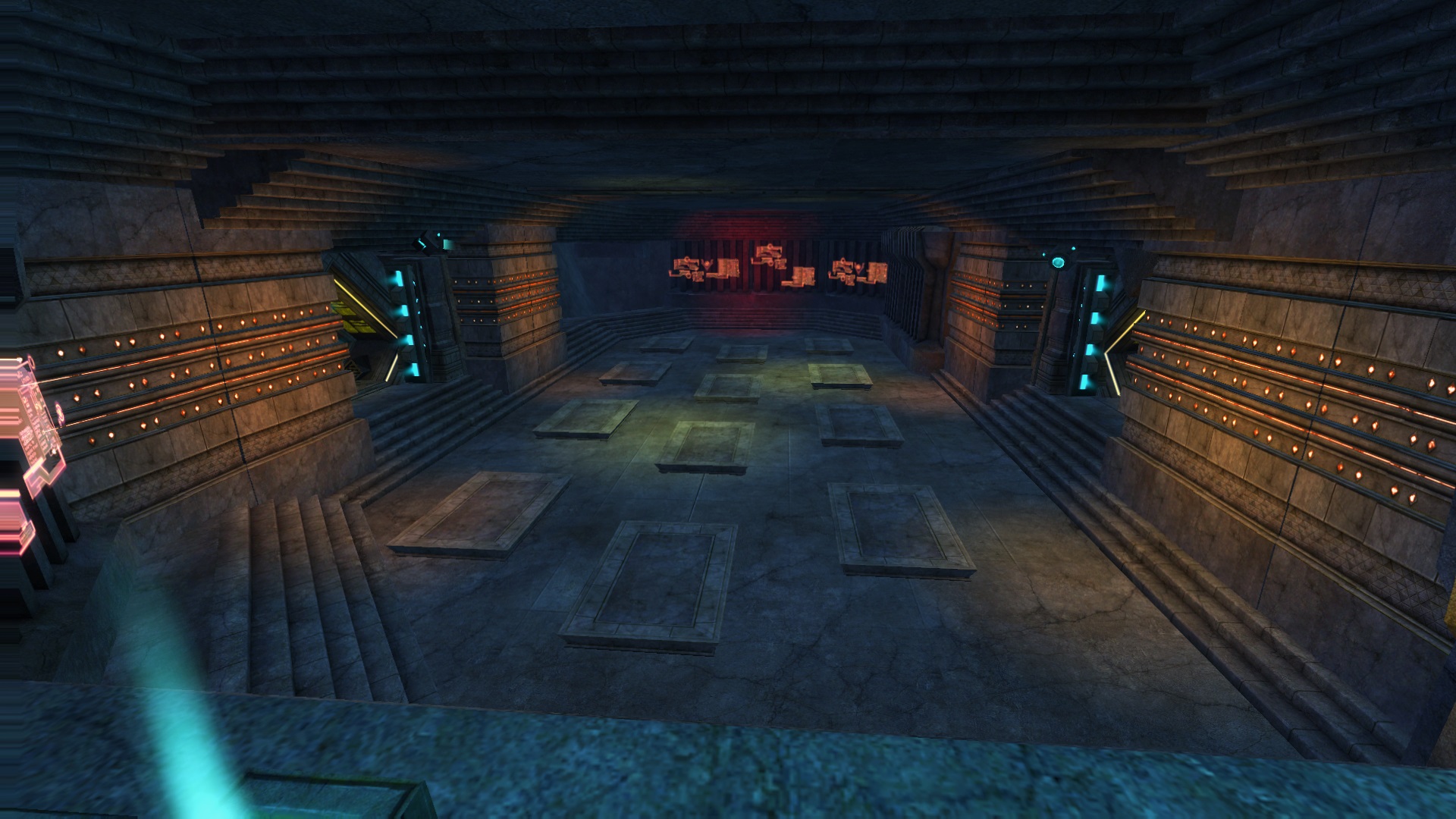 The room looks like an usable one, two doors, with associated corridors. With some "tables" that for me are made to position golems and while agents configure them.
But both of those tunnels end on a wall, assets added to block them, regular stone pillars. Not so far, on the map you can see a secondary tunnel linking Thaumagolemic Observation Creche to Ambulatory Preparation Facility. Same process, blocked by a normal wall or stone pillar.
The south part of Ambulatory Preparation Facility is unavailable, you just see golems running around in it. But the room seems bigger than what is shown.

2-The mysterious upper path of the aquarium. 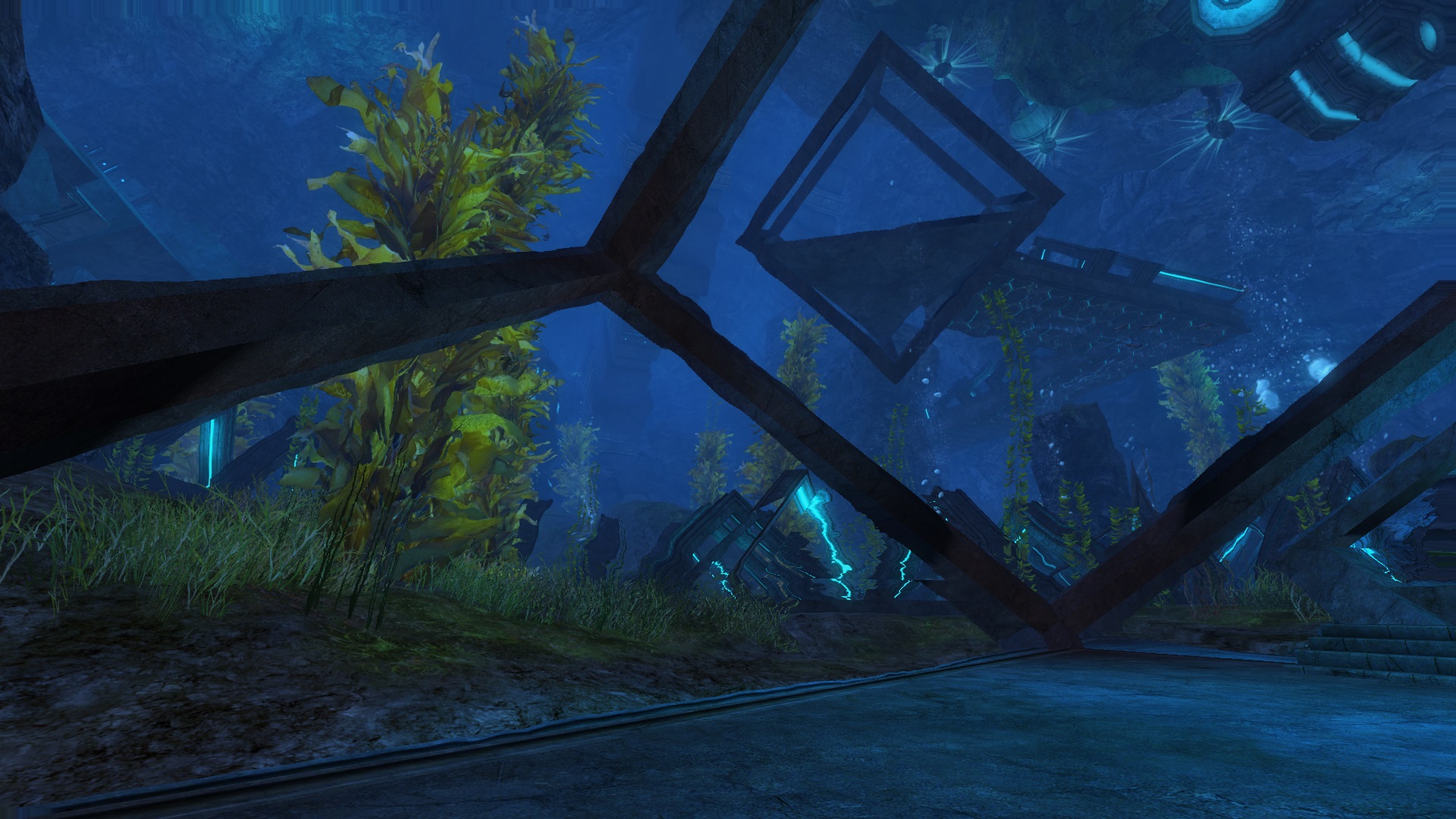 Considering the orientation and direction, It feels like it's aimed toward the area under Ambulatory Preparation Facility, through the analysis is unclear, showing a little triangle-like shape, the whole have simply been never implemented/scrapped. Maybe it's linked to upper levels, will re-speak about that later. The rest of the aquarium is neat, just showing the aquatic lamp posts. And aquatic buildings. 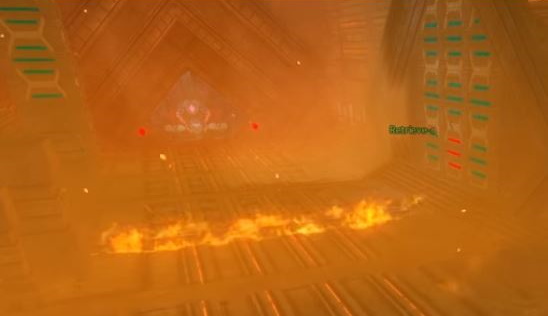 This is the greatest anomaly, very visible, it looks like stone spires emitting lights, associated with very huge corridors/ observation platforms, that huge structure feels like the reactor in Thaumanova Fractal with the columns filled with coolant. It's evoked during dialogues that the reactor is melting down, but the area we visit during story path feels more like a control room. The power supply required to run the facility is surely bigger than that room, implying ton of whatever radioactive rods, crystals or whatever, but fusion. That discovered part seems linked to Central Data Repository and Essence Purification zone. And guess what? Both extremity are locked by stone pillars identical to the ones of the previous points.

Well that's the name coming to my mind. This is a huge space under Experimental Lab Red. That seems to have an access to the center of the crucible but also an annex room not far of Alchemic Spillway. The surface is very important and intriguing. Fun fact, we can see a "G" dunno really why. 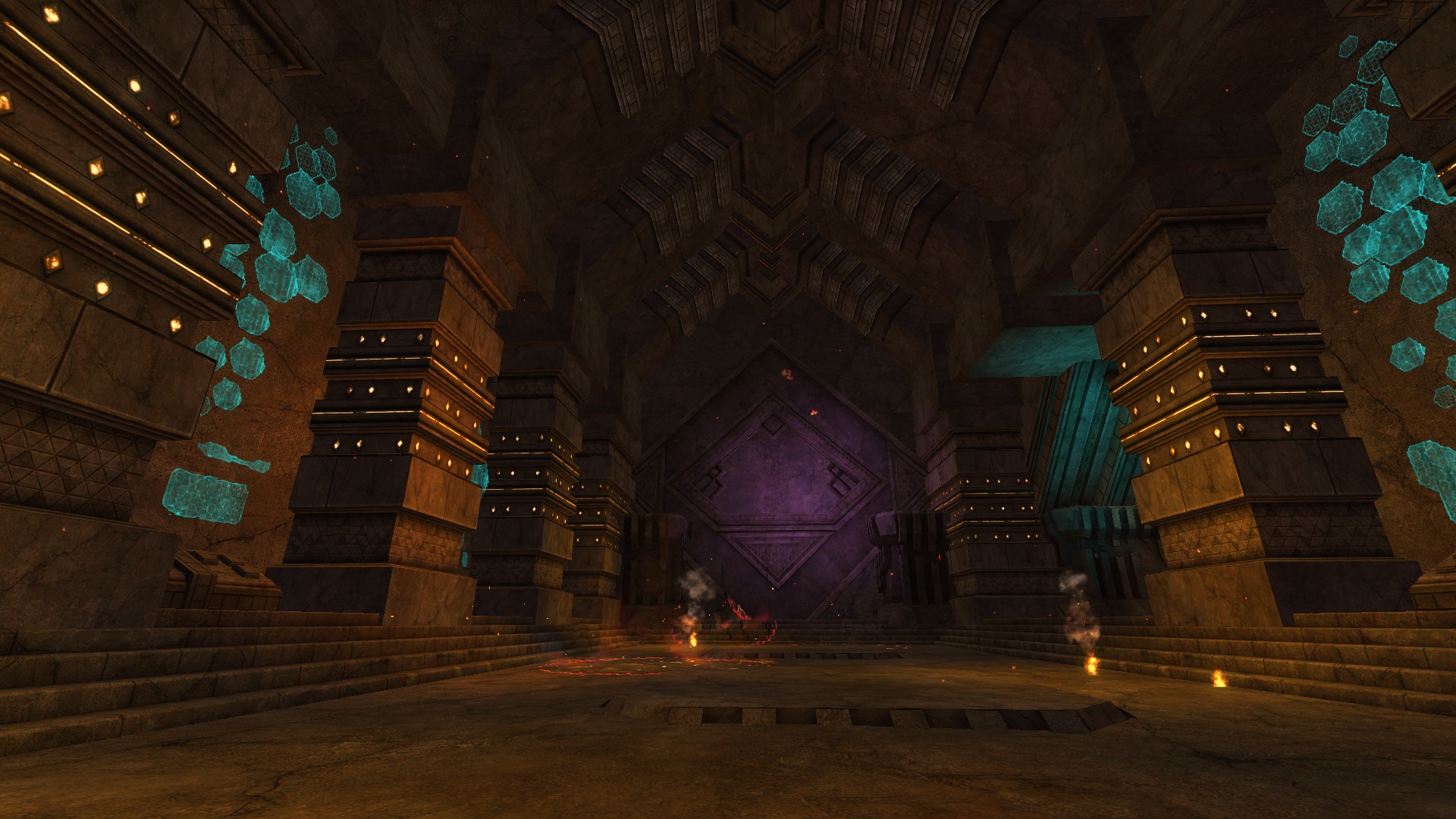 The area is again, full of strange visible tunnel-like structures. They are filling all the remaining space, I noted there is a blocked tunnel in the main room. In this case it would have lead to Independent Research Sector. At the north of Golemgate Delivery Dock, we have a huge space, similar to the Aquarium in term of texture, normal, it's filled with water, surely a way to the surface, allowing submarine to arrive. 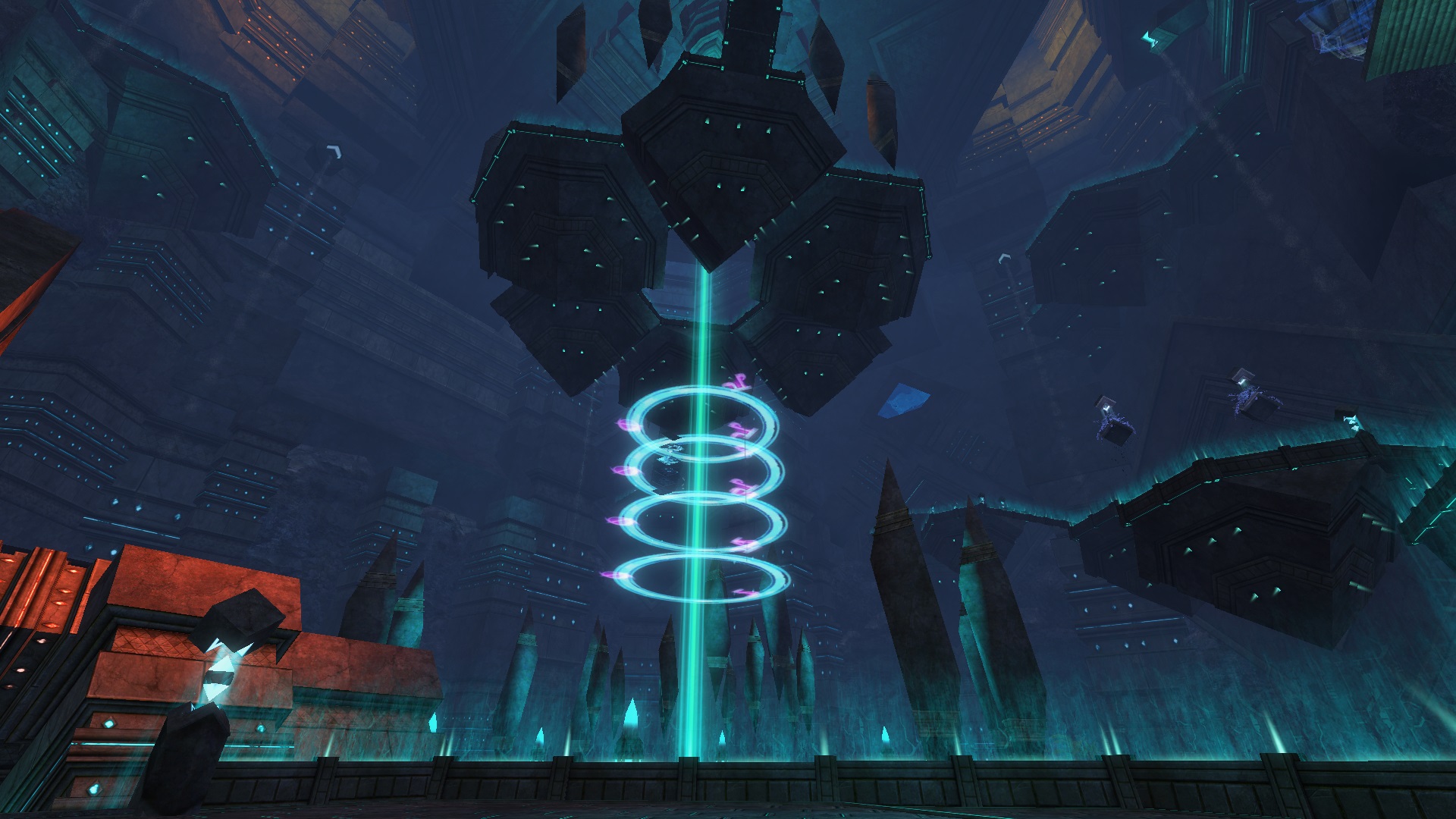 The most fascinating point, the upper levels are full of unreachable doors and platforms. I've represented them at the center in addition of some access platforms. Firstly, you have 3 hexagonal platforms joined together with on each side of that ensemble, 2 closed stone gates. (upper right corner of picture) Then, you have a long corridor, protected by force field (just at the bottom right of the main 6 platforms at the top-center of the picture) To continue, that rectangular platform associated with one hexagonal equipped with one stone gate. (Top left of picture). The last one is an orange lights corridor leading to a data terminal, cannot be seen cause behind me. Shown on first picture, top of essence purification zone.

Imho, some feels more than simple map artifacts or random brushes. Arcanic Reactor and Lab Experimental Red ones are very well detailed. Why bothering so much with things outside of the map? You can't see those lights pillars in the reactor, it's for me definitely another room. Maybe the lab one was a placeholder because the lab was planned to be bigger?
The last "mystery", at the right of the reactor, locked behind a gate is an emergency asura gate I guess. The anomalies of Thaumagolemic Observation Creche are visible on the map itself but also by you looking through the force fields. That Unused room exists, and is simply ignored. I should say two, because maybe the blocked corridor also have a room.

What bother me, is that as you can see, there isn't let's say false positive, on the reedited map, you clearly see where you have nothing and where there is something. Alpha Reserve, The Aquarium and the center of the Crucible are clean; even the water cave of Golemgate Delivery Dock.