A message from McKenna Berdrow:

I want to update everyone on the design we currently are investigating to help achieve population balance between worlds, and the goals we hope this new World Restructuring system can achieve.

The goals of the World Restructuring system are:

It is important to keep in mind that we still are investigating and working on this system. It is possible that this system will continue to evolve as we develop it, and we will be constantly testing to make sure the system meets our goals and our expectations for a quality experience. This post is an opportunity to share with you our plans for the new system, and respond to questions before the system is far long in the development process.

Even though world linking has brought world populations closer together, it is impossible for us to get populations and coverage any closer because the current worlds do not give us the granularity needed to do that. For example in NA, Blackgate has decent coverage across all time zones whereas worlds like Crystal Desert have higher peak times and lower off-hour times. Because world linking isn't granular enough, we don't have the ideal link that allows Crystal Desert to have coverage that is similar to Blackgate.

This is why, in the new World Restructuring system, we will remove all players from their current worlds, and make new worlds every eight weeks. This will create more granular pieces, which allow us to avoid situations like the Crystal Desert example.

Since worlds will not exist any longer, the "World Selection" that currently is available in character select will be eliminated, and instead a selection for playing in either North America or Europe will replace it.

The system creates new worlds and assigns them a pre-generated name at the start of each season. We use 'season' to describe the time between World Restructuring. We plan on eight-week seasons, which is similar to the current time between links. We will discuss more about seasons later.

World Creation builds teams so they have similar predicted participation, skill, coverage, and language. Team assignment moves players onto teams by calculating the contribution value of a player and using that calculation to distribute players fairly. We plan to track stats like play hours in WvW, commander time and squad size, time of day, and participation levels. The exact stats have yet to be determined and we are open to suggestions of other stats to use in this system. This new system will expand upon the current calculation that uses play hours for linking.

If a player has played WvW before, we will be able to use the statistics from their account to sort them into a new world. The system also makes a world assignment for players who have not played WvW before, when they first begin WvW. Ideally the system will assign a new player to a world on which their friends or guild mates play, thereby making it easier than it is at present for people to play with friends in WvW.

We want to make sure that playing with WvW guild mates is easy in this new system. Guilds will be able to specify if they are a WvW guild. This essentially means the World Restructuring system will consider that factor at the start of each season when assigning the guild to a world. On an individual player level, once a player's guild has specified they are a WvW guild, the individual player will be able to set ONE of their guilds as their personal WvW guild. When World Restructuring happens at the start of a season, as long as you have specified your WvW guild, you will be assigned to the same world as everyone else in your WvW guild, guaranteeing you will be able to play with your guild mates.

We also want to make sure that existing WvW communities can play together in this new system. A WvW guild will be able to invite other WvW guilds to their WvW Alliance. WvW Alliances function as a party for guilds. When World Restructuring happens, the system assigns all members in the WvW guilds that make up the WvW alliance to the same world. These WvW alliances will have certain restrictions on them, such as a finite number of guilds or number of players. Our current plans for alliance size are somewhere between 500-1000 members, and we are still considering the technical and match-making ramifications of the number that we settle upon.

So to summarize world creation: at the start of every season our new World Restructuring system will use recent statistics, based on similar predicted participation, skill, and coverage, to create worlds filled with alliances, guilds, and unaffiliated players. 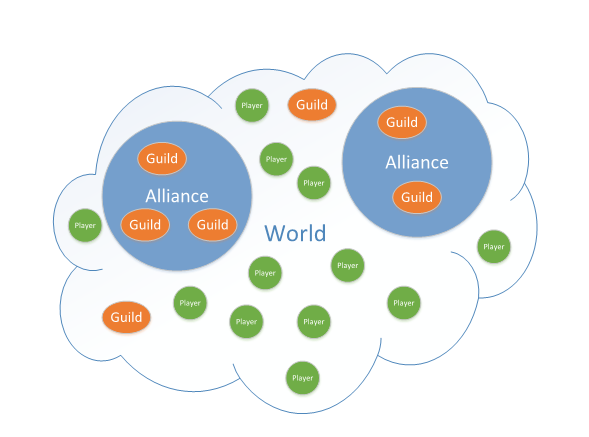 The above graph displays an example of what makes up a world under the World Restructuring system. Keep in mind, due to the algorithm used to keep worlds balanced, the number of alliances, guilds, and individual players can be wildly different between worlds, but the participation and playtime should be relatively the same.

Seasons break WvW into cycles where several matches will play out. The current design for seasons is 8 weeks, but we are open to feedback. Matches are still a week long, so there would be eight matches a season in the above scenario. During the season, we will still be using 1-up, 1-down.

Transferring between regions, from NA to EU, will still exist. We have not determined the costs for transferring but a region selection will be available on the character select screen that will allow transfers.

We understand that even though this system tries to keep guilds and alliances together, there will be times during the season when people want to change teams. Because of this, there are plans to allow transfers between worlds during a season. This means that new worlds will have size restrictions on them, as they do currently.

Players will be able to select worlds from the WvW panel in game. Worlds that are available for transfers will show up in the new WvW world panel. Worlds can be in these three different states:

The cost of transfer worlds has not been determined.

Transitioning to this System

This system is going to take time to make. As mentioned in the WvW FAQ, part of the reason we did World Linking was because it utilized a lot of existing tech and did not require a considerable amount of time. This allowed us to address the growing population issue quickly, while also being able to address other WvW issues. This new system is going to take considerably more time to make. We do not have a release date, but this is going to require several months of work and it will share resources with any other WvW changes that we work on.

Transitioning to this system is going to be slow and we want to make this transition as smooth as possible. Once this system is ready, we plan to give everyone several weeks to form their WvW guilds and alliances. We also want to give titles related to the worlds on which players currently are playing when World Restructuring goes live. If there are other transition ideas, we would love to hear them!

We will continue with World Linking until World Restructuring is ready to ship.

That was a lot of information and I am sure there are many questions. The team will do its best to answer them. We appreciate any feedback on this system. Your opinions of this system, as well as the community's response, will be an important part of how we tackle this project.

If the reception is not great for this system, then the other alternative is most likely to continue World Linking. Even though making a choice between the two systems might seem like too drastic a change for some people, we have been exploring other designs to deal with WvW populations for years and we believe that World Restructuring or World Linking are the only solutions that meet our requirements. Simply "blowing up" worlds or removing people from the worlds on which they currently play is high risk (which is why we have avoided it for so long), and the only reason we are considering World Restructuring now is because it allows players to maintain and continue to build some of the communities they've created through the years.