That's the small project I've been working on for some time now. My goal was to make Renegade more special as en E-Spec. I wanted the whole trait system to be more interactive. I swapped utilities with Summons so Kalla's warband is usable on every core legend. And lastly, I wanted Renegade to truly depict Kalla Scorchrazor - with a Greatsword.
I remade Renegade's promotional artwork to show it using greatsword. I also remade the existing shortbow skill icons to fit with the new weapon.

IMPORTANT NOTE: This is a fan project and all artworks used are made by ANet, I just remade them to fit in the project.

So, let's begin and I hope you'll enjoy it! 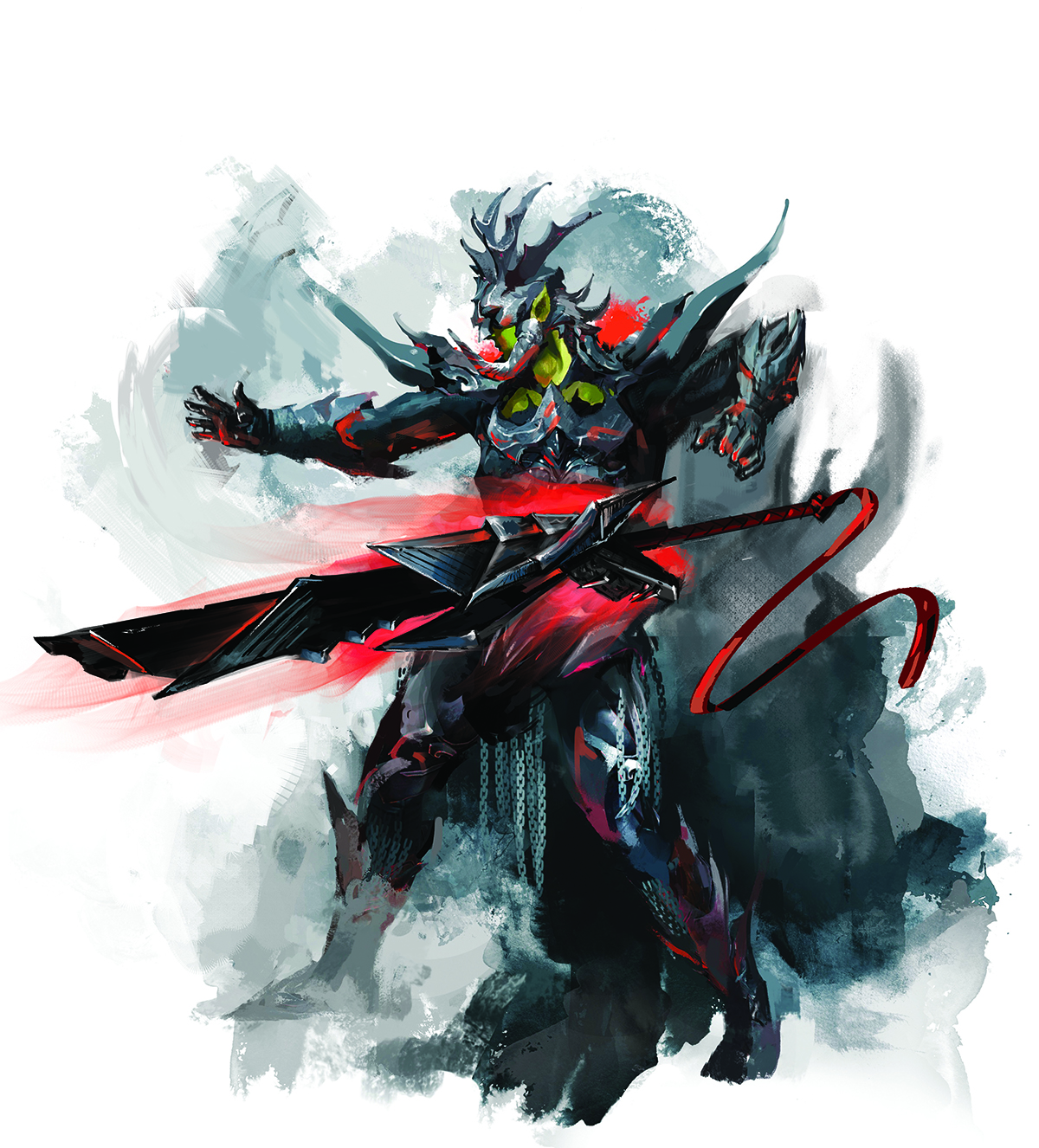 The legendary charr revolutionary, Kalla Scorchrazor, lends the power of her warband to revenants who summon her from the Mists. Renegades fight with a greatsword, conjuring blades through Mist portals to blindside their enemies.

Renegade is an elite specialization for the revenant that unlocks the Legendary Renegade Stance. It also allows the revenant to use a greatsword.

This one was hard. I know that GW2 and AI don't get along and but I really wanted to create a feeling of having a warband. Now, you can basically summon Kalla's warband to aid you in battle. The Spirit mechanic has been moved to Class Utility Bar, so you are now able to summon the spirits without a legend restriction. I even thought that it would be cool if summons changed with legends but this would be insane; imagine 4 Stone Dwarves running around you, 4 Demons, 4 Shiro Ken or 4 Centaurs. This would be something.
But I wanted to keep the charr theme that Renegade gives us.
Spirits now use a double-cast abilities. Their Energy cost is set to 10 (read Traits), and can be reactivated for additional effects. They disappear after you use their abilities.
I'm not sure about the time Spirits can stay with Renegade, but I thought that 10-15 seconds would be enough to make use of new Kalla's Favor mechanic.

It was fun remaking ability icons and the remaking shortbow skills to work as greatsword. And yes, Greatsword is now a ranged weapon with melee capabilites.
Greatsword is now a hybrid weapon that gives you some mobility. The conditions are nearly the same, except additional Weakness. I wanted to keep the feel of Shortbow for players who enjoy using it.
I really wanted Greatsword to feel special, so you can play both Condition Builds, Power Builds or build Hybrid and feel just fine. You can now summon blades from the mists to rend through your foes. This isn't a Mesmer GS. I've been thinking if 20% Physical Projectile on autoattack would be nice, and indeed, it would. I also thought of something like Guardian's Axe but on a much larger scale. This is just a loose idea, so you know - it can be either shooting blades from portals or slashing through the Mists.

I swapped the Utility skills with Summons. They feel more natural to be part of the Kalla's kit rather than the whole profession mechanic. They are very similar to what they were before, but are now a bit more interactive with Kalla's Favor. You want to build up the most stacks you can, and then use them for the best results.

Kalla's Fervor is now a usable resource for Renegade. You can consume it for additional or to empower the Elite abilities or Core Legends.
I will explain the usage for Core Legends later in the post. 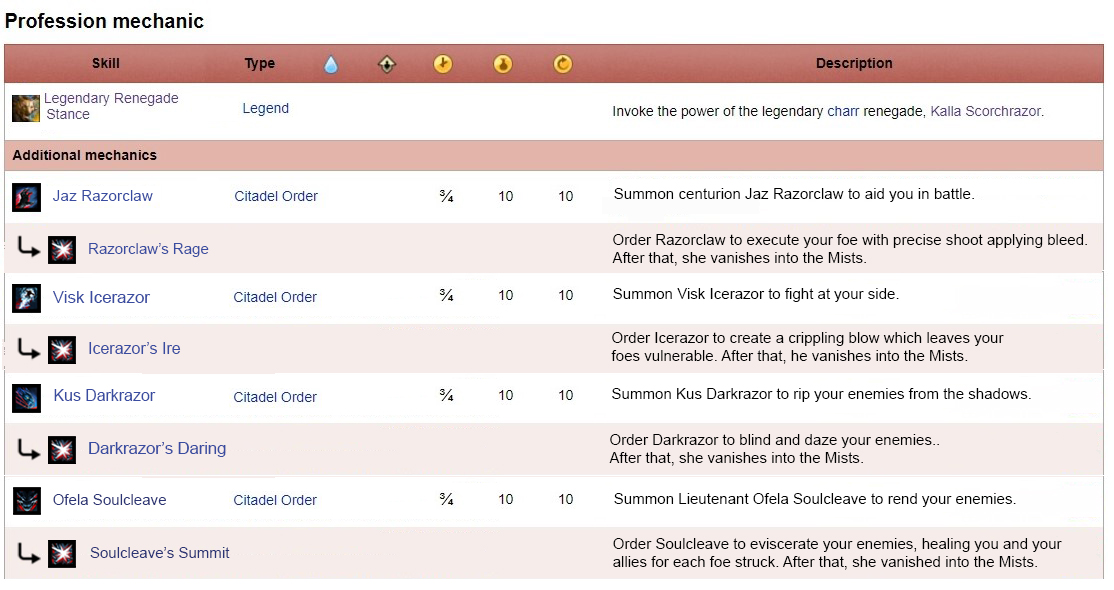 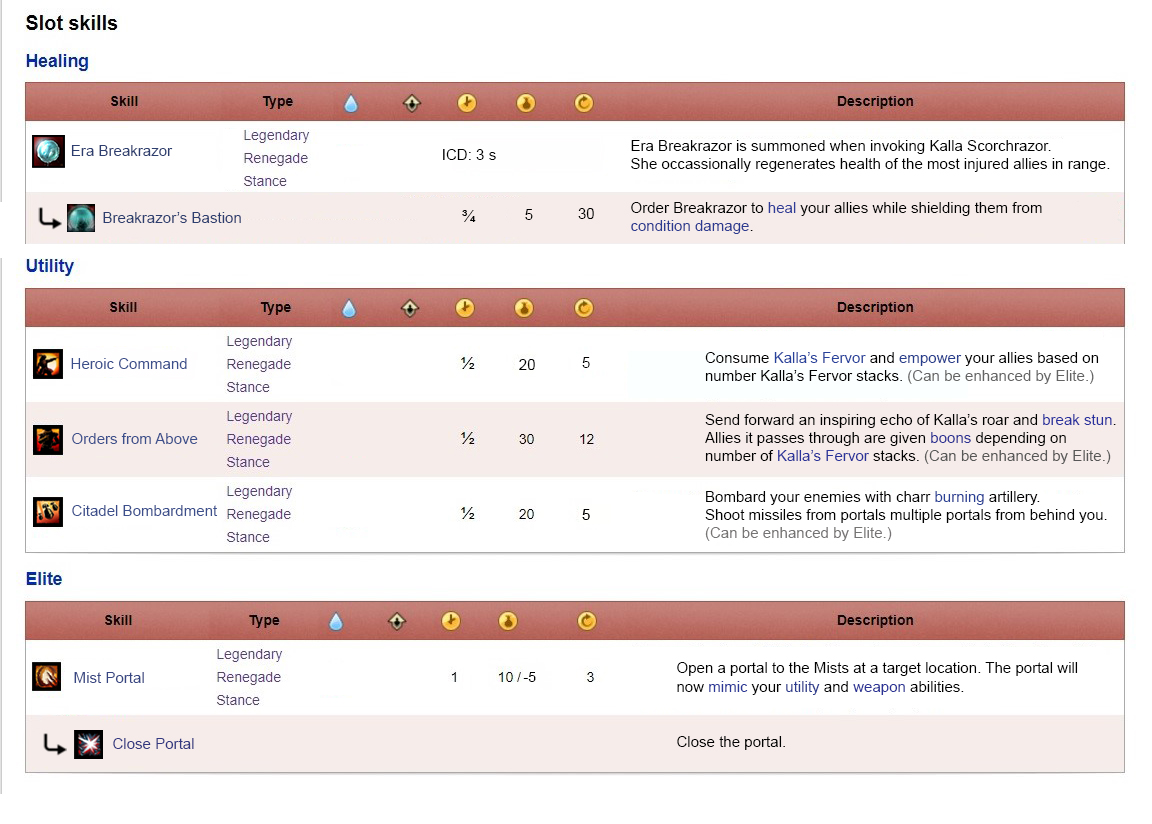 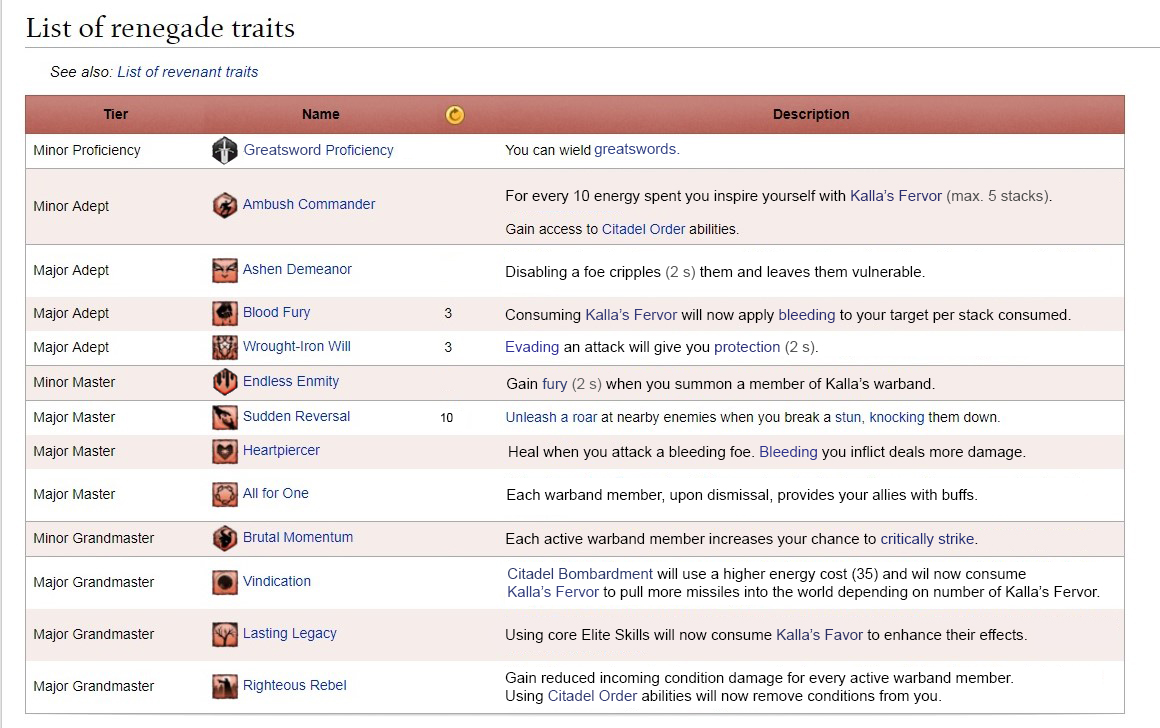 Kalla's Favor is now a usable resource. You can use it to either empower your allies while invoking Kalla Scorchrazor or enhance the effects of your Elite Abilities of Core Legends. This is a brief explenation on how it works:

Rite of the Great Dwarf will now be enhanced and will grant X amount of barrier to you and your allies for every stack of Kalla's Favor consumed.

Embrace Darkness will now be enhanced and will increase All Stats bonus by 2% (max 10%) for every stack of Kalla's Favor consumed.

Jade Winds will now be enhanced and will grant you Unblockable Buff (max 5 stacks) for every stack of Kalla's Favor consumed.

Energy Expulsion will now be enhanced and will grant you Alacrity (max 5 s) for every stack of Kalla's Favor consumed. 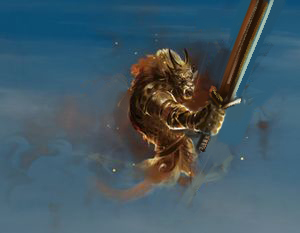 So, my goal was to make Renegade a bit more mobile in its playstyle. I wanted to keep some of the traits and abilities as I like them and I thought that they can still work i trated properly. Of course I am by no means a game designer, but I really like to think of other version, and stuff like "what if...?".

Feel free to comment what you think. I'd love some creative feedback. I know this isn't perfect but I really wanted to try my best when taking into account everything I liked about Renegade but still making it a breath of fresh air for everyone.

I hope you enjoyed!