The reason this is posted in the General Discussion sub-forum and not in the Fractals, Dungeons, and Raids sub-forum is because of the reply I got from the GM to my ticket regarding this.

My suggestion is about adding another tab to Fion [Guild Decoration Trader] which will allow us to trade decoration trophy drops from Raids for either magnetite shards (W1-4) or gaeting crystals (W5-6). Something like this. 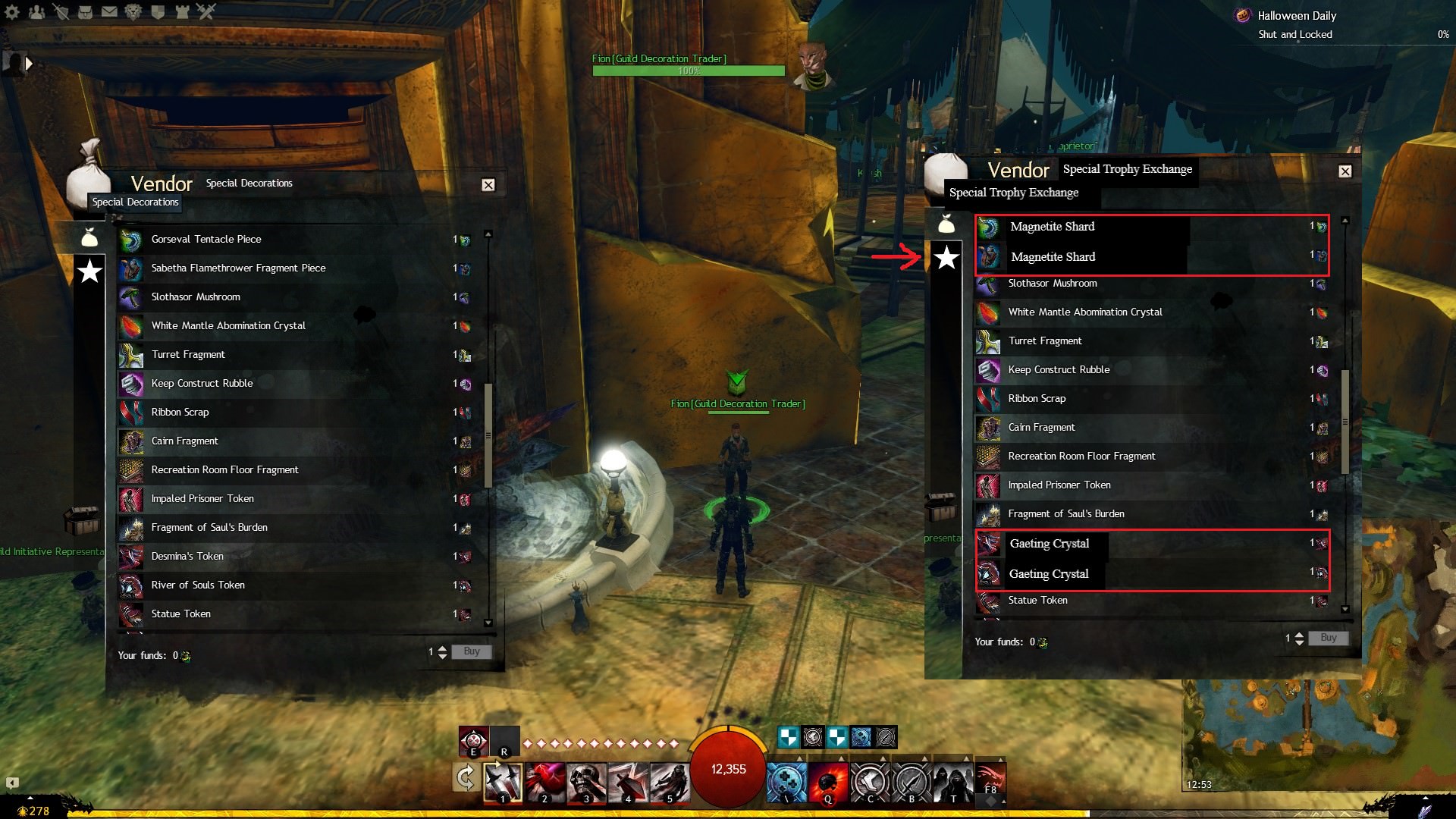 Other options are adding it to the Basic Magnetite Exchange Operative in LA's Aerodrome instead of Guild Decoration Trader or for the exchange itself, another option is 1 silver, 5 silver or 10 silver for a trophy piece instead; though I prefer the 1:1 Trophy:Magnetite Shard/Gaeting Crystal suggestion personally.

Aside for guild hall decorations, these trophies serve as kill proofs (KPs) for raid pugging. They are good to keep when you are still new to raiding, not part of a raid or high end PVE/X guild and only relies on pugging as you would need them to present proof of you completing corresponding raid bosses (also river of W5) before. But then you'll reach a certain point that you will have no need for most them for many possible reasons. Finding a raid/high end PVE/X guild or static group that you'll do raids with later on, or you'll have enough KPs of the last raid boss of the wing (e.g. Sabetha, Xera or Dhuum) and that would be good enough to keep which means you don't need the KPs from the bosses before the last raid boss. Also, titles or legendary armour.

And about as guild hall decorations, they are not used much as pieces aside from Mursaat Overseer's Recreation Floor Fragment and Samarog's Impaled Prisoner Token as they can be used as part of the jumping puzzles players make inside their Guild Halls. Then some guilds make a Gold version Trophy Decoration to display and once they have that, they don't really need further pieces as Guild Halls have a limited number of decorations allowed and they much prefer to allocate them for JPs (SAB clouds etc.) or have fancy furnitures and other decorations around (WvW, from seasonal events)These pieces would just end up piling in inventory/storage, waiting to be destroyed or just deposited to GH and never to be seen again.

Another extra thing, maybe also the CM fractal drops ( [] of the Solid Ocean) can have an exchange similar to this. (e.g.) Fragment = 1 fractal relic, Chunk = 2 fractal relic, Block = 3 fractal relic.

What are your thoughts on this suggestion?