A squishy warrior build that actually does damage thanks to Axe.(Not sponsored btw)
It does probably 2-3x more damage than the average Strength+Dagger build running the same gear + utilities + specs.
It's over a month in, and i'm pretty convinced this is the most fun you can have playing Warrior and still be effective.

Why Take Axe over Dagger?
Because Dagger tickles after all its nerfs; even with zerker stats, and Axe 3 didn't get a damage coefficient nerf last patch so you get big beefy numbers like this with the right setups:

✋😩👌
And in game i've personally hit for as high as 6k when all the stars align on actual players.

Other than that, Eviscerate is decent and satisfying skill to hit. Also baits dodges.
Save for evis, and unlike dagger; none of the other axe skills have awkward snapping animations that lock you in place like the Dagger burst and Dagger 2. Those aren't very safe when you build super squishy like this.

Bunch of different options when it comes to runes:
•Strength - My personal favorite, gives a consistent damage boost
•Eagle - For more damage overall, but only on crits and when peeps be below 50% health
•Fighter - Slightly tankier alternative with less damage 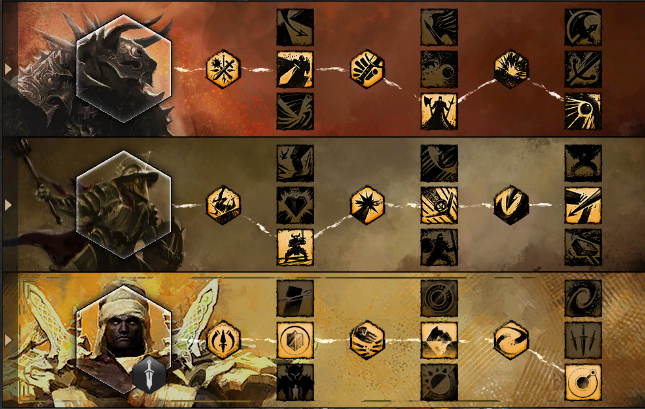 You could take Pure Strike(First line, Spellbreaker trait) Over Guard Counter but the DPS increase isn't all that noticable. The protection definitely doesn't hurt when you're this squishy.

When people ask me about this build, they always question why I take Slow Counter over Loss Aversion and that's because this build has 3 skills that might trigger an extra 90 damage and give +2 Adrenaline from Loss Aversion.
When Slow Counter is combined with Sigil of Opportunity, Full Counter becomes a 5% damage multiplier for your Axe attacks. Slow and cripple also apply through stability, which is probably this build's only actual answer to Stability.

Tips & Tricks:
•Dodge a lot! Use the first half of the endurance bar to cleanse blinds and even offensively. It refills fairly fast so it can be used pretty liberally.
•Full counter can set up for mending by interrupting someone for the entirety of its cast-time.
•Shield 4, Bull's Charge, and Full Counter are the main setups for damage. If you Full-Counter, usually your opponent will dodge which can lead to an easy Eviscerate.
•Eviscerate also baits dodges. It doesn't do as much damage as people think, but it looks supa deadly so people will still probably blow a dodge on it.
•Axe 3 is the ultimate executioner. If you can use it on someone below 25% with magebane and peak performance both procced, you will probably finish them off with just that one skill.
•Frenzy can be used before Rampage to boost Rampage's damage. It can also be used before mending in a pinch to keep you alive and to cast mending faster.
•You can't always be ultra aggressive with this build. Very squishy. At times you will have to passively whittle people down and play more evasively. If someone is playing a minimal damage support/bunker build, you can consistently pressure that pretty safely. Same goes for a range build like LB Ranger or Deadeye. Don't play so evasively against those, or you'll dead.

Counters:
•Ngl, Dragonhunter messes this build up something fierce. You got your day, you know who you are.
•Firebrands with all their blocks, and tempests with their shock aura. Wreck this build. If you smack a shock aura in a teamfight, you are probably dead by all means. Magnetic aura also reflects Axe 3 and Gs4.
•Blind-spammy builds. Thief comes to mind because they can pretty much troll you with this build. I also went up against someone playing a Bunker Scrapper build doing something similar and I honestly couldn't even touch them as long as I took mending. Scroll back up to utilities if you want more info on how to best deal with that.
•That weird immortal Spellbreaker build I made at the start of the season can troll this build indefinitely. You will never kill it, but that build got boring to play real fast so I doubt anyone would actually play that, hah!

Strengths:
•Does a lot of damage and stands a pretty even chance against most other duelist builds.
•It does aight versus condi. Mending, traits, "SiO", and Signet of Stamina(if you take it) can eliminate condi pressure pretty easily.
•It isn't a condi and/or bunker build.
•Pretty mobile, great for rotating.
•It's actually fun to play and actually does damage.

If you have any changes, suggestions, builds of your own, feel free to share. Hopefully this helps some people confused on what Warrior build to play after patch.

Remove or Split DuoQ, revolution of our time! 😷