Writing on the new forums ...

... can be a little tricky. Writing certain things like a guide or a detailed list turns out to be difficult and the formatting options are quite limited. We have received a few upgrades over the last years, but the struggle is still real. With the recent patch, I was forced to re-write the post from scratch. Most of the formatting was ruined, codes became unreadable and as most of you may have noticed, spoiler work a little different now. But some things still work, which are still not embedded in the formatting options. Here we go again ... 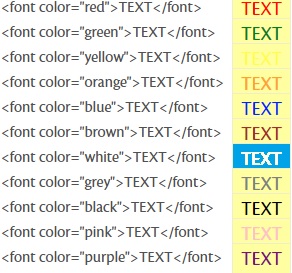 This is a spoiler. Every line of the spoiler needs this tag at the beginning.
See?

If you leave a line without a tag, this will happen.

If you use it on the next line, this will happen.
It really gets messed up. If you use the spoiler-option in the menue after marking the whole text, it will be added automatically.
The old tag does no longer work.

Underlined Text
[BUG] Sometimes the picture not gets loaded. You can also find the tags in the topic below, 6.) CODE. I use it there as an example.
6.) CODE

The code tag only functions as a highlighter now. It adds a yellow background to your text.
But it does no longer allow you to show other people code-tags. Those will get executed instead.
Example: underlined text
7.) Text as Link

Guildwars2
7.) Tables
Those seem to work, but you cannot enable borders, what makes them look really weird. Creating a table is a bit complicated in my opinion. If you google for "html table editor" you can find excellent programs which create you the code so you only have to copy/paste it.
This is the most basic one I found so far: divtable.com

Example for a 2x2 table:

Note: Column width get adjusted to the longest text in a cell, obviously.

As with the old version, I hope this helps you a little. All the stuff you see listed above was found by try and error.