Here's my another little project I've been working on for a while. This time, I tried to reimagine our corrupted assassin - Shiro Tagachi. I really like bridging GW1 and GW2, so I tried to make Legendary Assassin Stance as close to the original Guild Wars villain as possible. Some skills might seem confusing as I sticked with the current names but changed their functionality. The concept wraps up the entire functionality of assassin; with Swords, Traits, Skills and Legend itself. Also, new icons, visuals and dialogues.

important note: This is a fan project and most artworks used here are made by ANet, I just remade them to fit in the project. 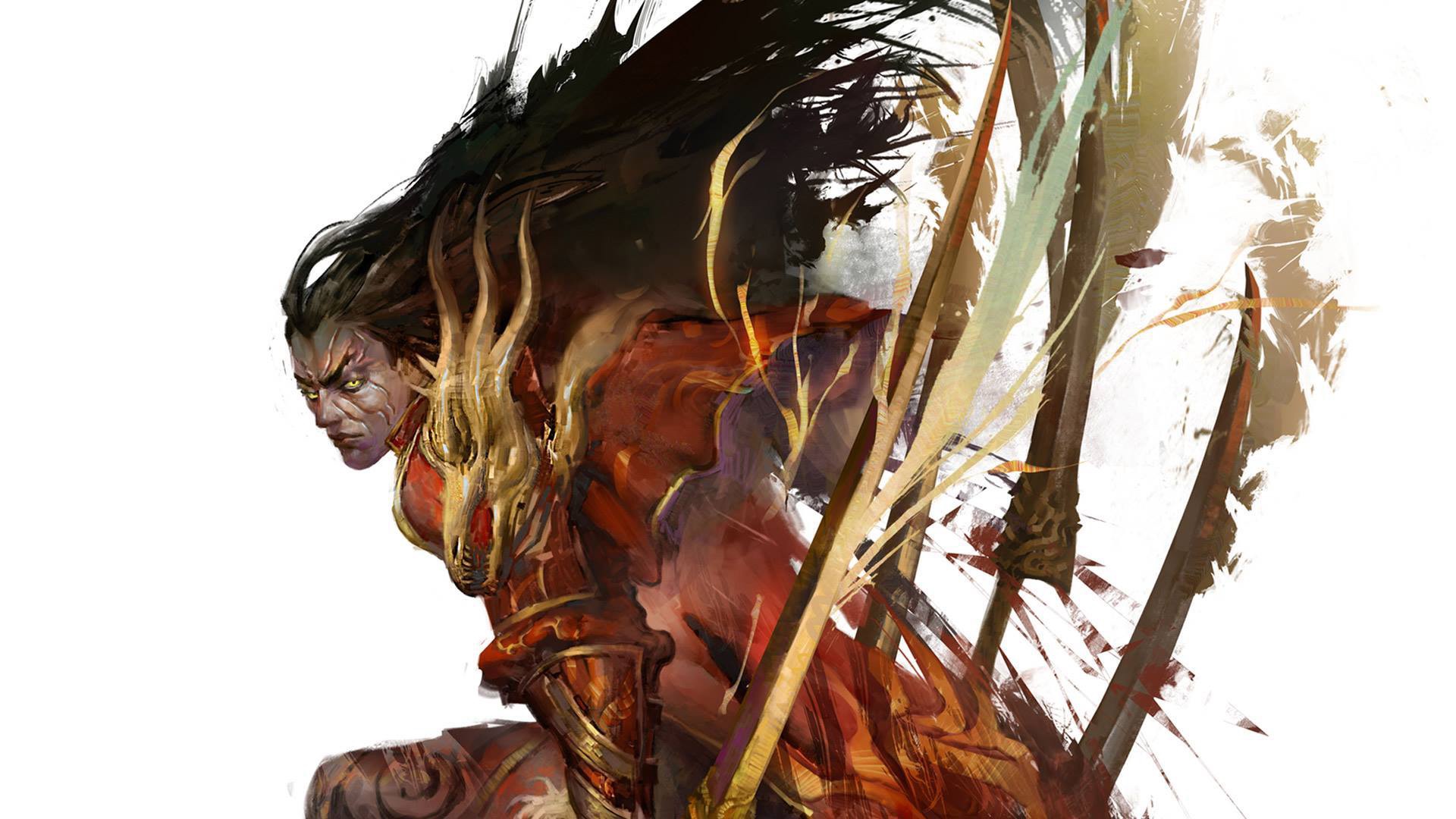 Artwork made by Naomi Baker

The legendary canthan assassin Shiro Tagachi, allows to use his vicious speed and cause havoc in the battlefield for revenants who summon him from the Mists. Your weapons of choice will be the swords that will give you the ability to cut through your enemies.

Legendary Assassin Stance is a core Legend that allows revenants to summon powers of Shiro Tagachi.

I always thought that Shiro summoned by revenants was missing something. This is caused mostly by having 2 pure movement skills. While this feels good to use in PvP, it also takes up 2 out of 5 skills on our skillbar. Revenant doesn't have a pool of utilities to choose from, so in PvE all we do is pop up Impossible Odds and keep spamming autoattacks. Here, I decided to give revenants some skills Shiro used in GW1. This way it's closer to the original boss. This means no more Jade Winds. While the CC with vulneraility is cool, I just wanted to make something completely different for an elite skill. Here, the legend is focusing on the sustained damage; life-siphon, while also being as mobile as possible.

While the Main-hand sword stays mostly the same, I decided to give some utility to the off-hand. Duelist's Preperation comes back before Shackling Wave. This way, Shackling Wave can have a quicker cast-time because it follows a huge telegraph that is a block. Another thing is that I added an optional flip-skill to Deathstrike that allows you to teleport back to where you shadowstep from. Similar to Thief's Infiltrator Strike. I made some energy cost, cast-time and cooldown changes to the weapons as well. More in the Traits.

With the rework I decided to refresh the look of our skillbar. This isn't a huge change as it's mostly a recolor of current one. But this, in my opinion, adds to the whole experience of that fan rework. Here you can see new skill icons (mostly from Original Guild Wars). These are slightly recolored and repainted to better fit the Revenant, so a splash of grey and red did the job. I know this is very similar to Renegade's skillbar color palette.

Some skills were renamed to better fit the Original Guild Wars Shiro Tagachi. For example, Battle Scars became the new upkeep. Impossible Odds is a stunbreak and Riposting Shadow was changed from being an evade to being a target teleport. I know this is confusing but I feel like the overall kit could be pretty fun to use.
No more Jade Winds.
I decided to change Jade Winds into something more interactive. While the sole idea of turning everyone into jade seems cool, Shiro had a pretty cool ability that is directly tied to the Mists. I thought it would be cool to use Echoing Banishment as a new elite skill. It changes the playstyle of Shiro and allows you to be a bit further from combat while still being a big threat to your enemies.

Let's dive deeper into the skills!

Here are some skill concepts, so they feel fresh and distinct from the current theme. Color palette: yellow, red and misty white. 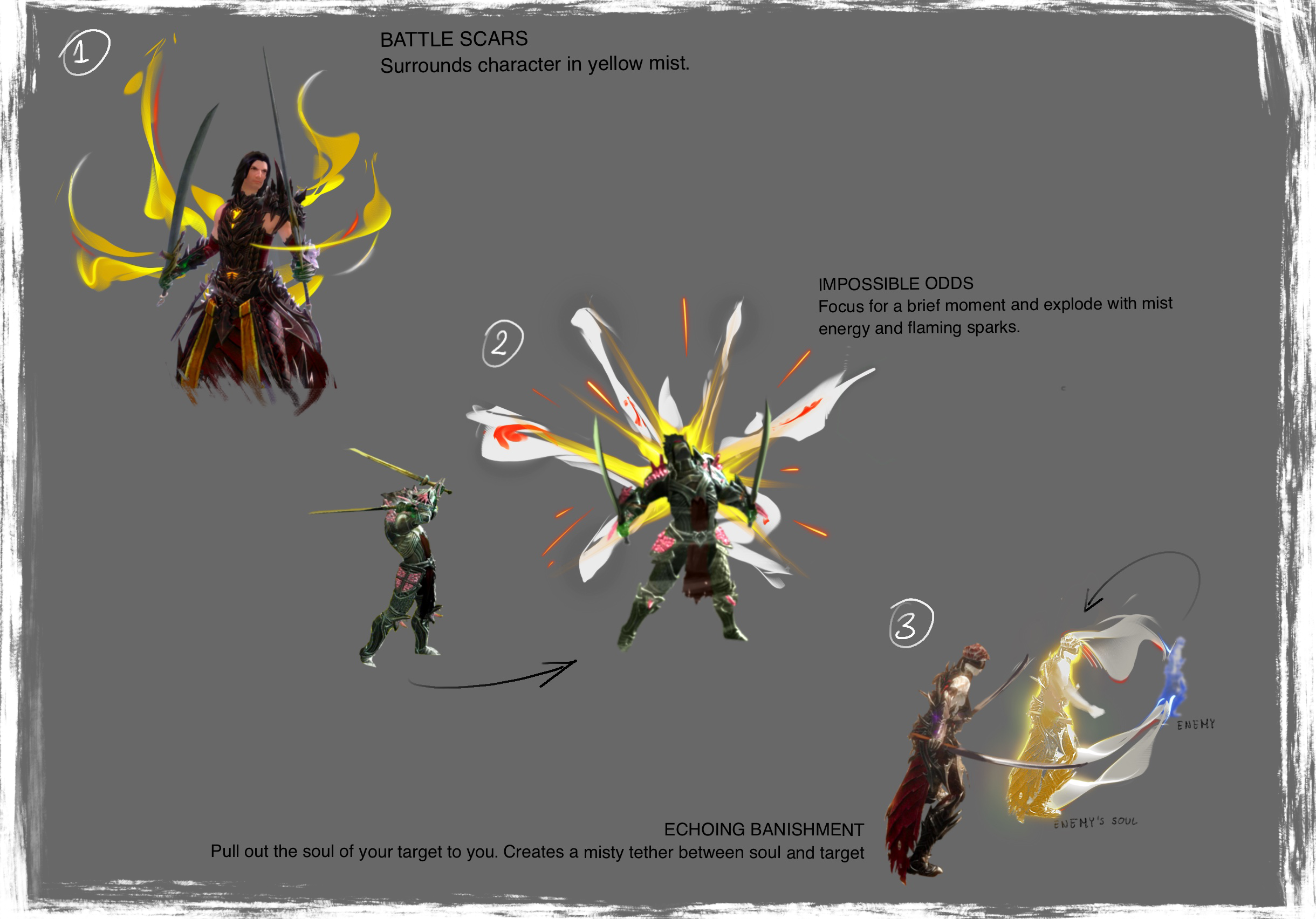 Meditation of the Reaper

Let's get crazy for a moment. I know, Infuse Light is the pain in the kitten for most of the players, so imagine we live in a world where Infuse Light doesn't work as we know it. Instead, Shiro has access to something similar that is also semi-offensive.
This skill doesn't heal you for the full damage you receive but just the portion, let's say 40%. During the meditation you are unable to attack, but you also gain a second cast that is Harvest. This way, you can damage nearby foes and heal for % of the damage dealt. So you're not left with 1k heal when enemies suddenly stop attacking you.

This skill is no longer an upkeep. It now works as a Stunbreak that gives cures conditions and gives you quickness. I loved the original concept of Impossible Odds giving revenants quickness on demand. This was later nerfed and we are currently with that weird mix of movement speed, bonus damage and it doesn't feel good. So, a fixed quickness duration after a stunbreak can feel like a good counter attack. Also, with Revenant having energy system, this skill can be used many times giving more quickness. But in order to keep it less spammy, I added 3 seconds of CD, so you still have to be careful while using it.

An evade? A teleport? A damage skill? - what is that?
So, Riposting Shadows becomes current Phase Traversal, but this time it's also a skill that deal a pretty decent unblockable damage. So it can be used as a burst, or as a gap-closer. Since the whole Shiro is going to be much more telegraphed with Duelist's Preperation and an increased cast time of Deathstrike, it's fair to have a skill that can deal massive damage and do something more.

Battle Scars become a new upkeep. This time, it isn't about speed or dealing extra strikes - it's sustain. Once you pop up Battle Scars, you are able to heal up pretty quickly, because the numbers increase when you're low on health. And while life-siphon also deals damage and is unblockable by design, I thought it could be a pretty cool skill. Movement and speed increase is provided via Traits, so skills don't have to do 4 things at once.

Here it is. This concept can seem kind of janky and clunky, but bear with me. Echoing Banishment will allow you to quickly resustain afar from combat, if you use it properly. The soul works basically like a real enemy, so all the life-siphon and vulnerability gets transferred onto your foe making it a good opener for a fight or a quick resustain during battle. If you happen to hit both soul and the enemy simultaneously, you deal normal damage to the target + the damage from their soul.

So, when recreating a concept of Shiro, I also tweaked Devastation to fit better into the overall legend mechanic. I think it synergizes with Assassin pretty nicely, as it works with single abilities as we as the whole weapon-set of revenants. It can be also useful with legends other than Shiro, though it obviously favors it. Traits are pretty self-explainatory, so I won't talk much about them. Though I really enjoyed doing them.

Upon activating Assassin Stance while in combat:
Shiro: Death by a thousand cuts!

Upon meeting a Tengu:
Shiro: Even though our people never came to like each other, I value Tengu for their prowess.

When near Mouth of Torment Point of Interest:
Shiro: This place. It was the source of my pain.

When in Cantha:
Shiro: What have I done to my home...

Occasionally when using Echoing Banishment:
Shiro: Meet me in the Mists!
Shiro: Taste my blade!

That's all! I hope you enjoyed the read! I'd love to read your thoughts and comments.