My interest in this game is crafting builds that break away from the meta. The most recent result is this, which I've not seen anyone else using (at least in EU). 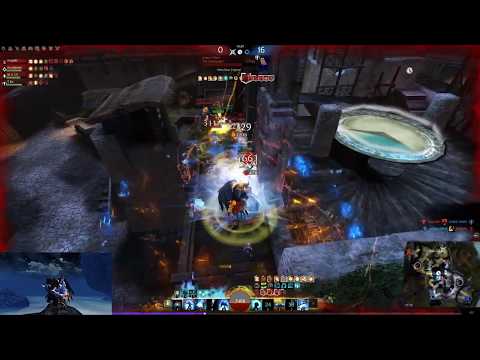 This is a random assortment of stuff from Ranked/Unranked/AT over the last 2 months. Its random because I usually forget to start recording >.< So its not necessarily all the best bits, its just stuff.

This post is about letting people know "hey, this thing exists, it works, you can use it", not about bragging (because I'm a pretty mediocre player), but for those who need to see "credentials", I have used this build for 100% of the last season, stayed pretty consistently in Plat-3, and finished at rank 42 (this is shown in the video). Not that top-50 means what it maybe once did, but what I'm saying is that this build has been tried and tested against players in EU P2/P3/Leg, and has been proven to be viable (at least in Ranked PvP). It is not a joke build that only works against Silvers.

The build is this:
http://gw2skills.net/editor/?vVAQRAnd5ensAD1BjNCD+7AkCjF+Bb/i2RPpYBgZQRIrClj6QA-jJhAQBd4kAIxyAA4JAQo9HAA

The aim is to fulfill multiple roles at once. It is part-support, part-team-nuker, part-duelist. The idea is that if you bring 60% of the support of a dedicated healer, and 60% of the damage of a dedicated DPS, then you're bringing 120% of either of those alone. I honestly find this easier to queue with, since you're not dependent on your team-mates in the same way as you are on full-support. You can make plays in team-fights, you can take 1v1s, and you can still keep your necro alive, but you're not chained to them.

So the build has:

Play-style, the build centers around Permeating Wrath. The key to this is to maximize how many times you hit. It doesn't matter much how hard those hits are, just that there's alot. Symbols help with making lots of hits, as does axe #1. Part of what makes the build viable right now is that we're in a power meta and most people aren't running much cleanse. It was alot tougher to play when spellbreakers were running FC-resistance and holos were running protection-conversion.

I'd be interested to see if there are more competent players than me who can make this work at legendary/mAT level.

On a side-note, this build is 100% not viable in WvW. Permeating Wrath trait is nerfed 50%, and since there are no capture-points, its much harder to force fights inside your symbols.