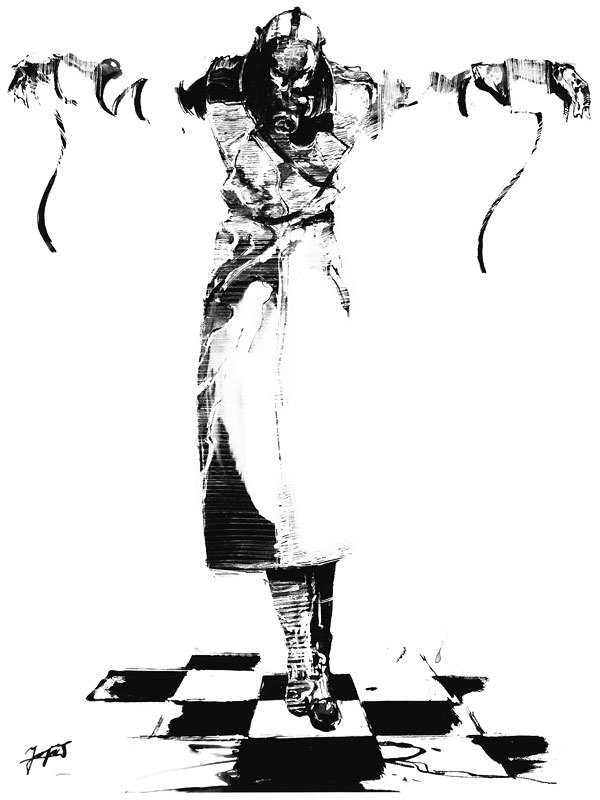 The Psychomancer uses it's magic to directly assault the minds of it's opponents. These mesmers use precise daggers to surgically slash at their victim's grip on reality. Their Subjugation spells take control of their enemies and sabotage their ability to fight.

Psychomancers abandon the mind games of Clones and shatters to directly assault their opponent's minds. Their shatter skills are replaced with hexes, which have two effects. First there is the initial immediate effect of the hex. The second effect marks the target for further hexing (Similar to Deadeye's Mark). Abilities that summon clones instead reapply the initial Hex effect automatically to the victim while the duration effect is active, grinding down the victim until they can no longer fight. Marking a target with a different hex overwrites the previous hex.

F1: Mental Throttle
Duration 8 Seconds. Cooldown 8 Seconds.
Directly Throttle the target's mind for X damage. Do X damage to the target when you would otherwise summon a clone. (The idea behind this is to alter Mind Wrack from this bomb where you want to shatter three at once and clones beyond the third ones aren't of much value for this spike, into an overall higher DPS but consistent grinder and any skill that would create a clone is a benefit to your damage)

F2: Phantom Pain
Duration 20 seconds. Cooldown 20 seconds.
Apply X stacks of Anxiety for Y seconds. Reapply Anxiety to the target when you would otherwise summon a clone. (Similar idea to Mental Throttle but condition based)

Anxiety is a new condition that can be thought of as the opposite of Torment. It does moderately high damage unless the target is actively moving at at least top nonswiftness combat speed at which point it will do considerably less, perhaps no damage. Anxiety combos well with movement impairing conditions like cripple, chilled and immobilize as well as stuns ensuring your target suffers as much as possible from Anxiety.

F3: Altered Memories
Effect duration 1 second. Hex duration 5s. 50 second cooldown.
Abilities used by the target while under the effect have their cooldowns increased by 30%. Reapply the effect the target when you would otherwise summon a clone while the hex duration is active.

F4: Backfire
Effect duration ½ second. Hex duration 4 second. 60 Second Cooldown. Erode your target's grip on reality. For ½ Seconds their offensive skills impact themselves. Reapply the effect to the target when you would otherwise summon a clone while the hex duration is active.

New Weapon: Mainhand Dagger
AutoAttack Chain: Fast and High damage. Final Strike applies applies a hex effect (Similar to how the scepter Scepter auto attack summons clones)
Skill 2: Flurry of high damage attacks. If all strikes hit it applies a hex effect.
Skill 3: Flip over skill. Skill 1 is an upward slash that applies a 1 second float if it connects. Skill 2 is a one second knockdown that can only be used if the target is still floating and does a high amount of damage.

Subjugation skills are a new skill type that focus on disabling the opponent or sabotaging them in some way.

Mind over Matter:
½ Second cast time. 3 second duration. 35 Second cooldown.
Healing: 1,853.
Healing received by the target is applied to the Psychomancer instead.

Alliance of Convenience:
1 second cast time. 5 second duration. 1200 Range. 60 Second Cooldown.
Subjugate the enemy target. The Enemy target treats the Psychomancer (And other aligned targets) as a friendly target for 3 seconds. The Psychomancer can still attack the target.

Compelling Whispers:
½ Second Cast time. 1200 Range. 30 Second Cooldown
Apply 2 seconds of fear and two seconds of immobilization. If the target is under the effects of Friendliest of Fire they are instead taunted towards their nearest enemy.

Mass Hysteria (Elite):
2 Second Cast time. 1200 yard Radius. 180 Second Cooldown
Send out a wave of deceptive energy making up to 10 enemies see all units as the Psychomacer for 10 seconds. (This includes name plates. Does not actively alter alignments.)

Minor Proficiency: You can wield dagger in your main hand.

Minor Master: Swift Mind: Critical strikes grant swiftness. Deal 7% more damage while under the effects of swiftness.
Major Master: Mind Reader: Disabling a target copies their boons on to you at 50% their remaining duration.
Major Master: Look, No Hands: Dagger skills gain reduced recharge and activate an additional hex. The Psychomancer wields them telepathically and they now have 300 range.
Major Master: Immediate Failure: Confusion no longer does damage over time on on target skill use, but does a flat burst of damage that scales with power when applied to a target.

Minor Grandmaster: Cruel Mind: Mental Throttle and Phantom Pain grant a stacking buff that increases damage and condition damage the more times they've been reactivated stacking up to 10 times.
Major Grandmaster: The Superior Mind: Transfer a condition to a victim marked by one of your hexes whenever you receive a boon.
Major Grandmaster: Dream Eater: 10% of damage dealt by hexes is now received as healing.
Major Grandmaster: Bad End: Activating a Hex has increased effectiveness the longer they have lingered on the target up to 30%.

The Psychomancer is designed around high sustained direct damage and sabotage. I wanted an elite specialization that rather than confusing enemies with clones and pressuring them with confusion, I wanted them to be second guessing absolutely every action they take while a Psychomancer is on the field. I also wanted an elite spec with better team fighting capabilities both in WvW and SPvP not by providing boons or big AoE damage but by causing entire teams to fall all over themselves, chasing the wrong targets, helping enemies and hurting allies, and reflecting damage even beyond what the game is already capable of. I also find the idea of using alignment swapping to cheese certain boss effects appealing for high skill raiders.

I also wanted a specialization that was both unique from what mesmers already have thematically while having a very broad appeal. Core mesmer focuses on the flashy duelist magician aspect of mesmers with their purple energy effects, butterflies, and duelist capabilites. Chronomancer taps into the idea of controlling time. They can reset their cooldowns with Continuum Split and Alacrity. They can also speed up their allies and slow down enemies. It's also extremely supportive. Mirage is extremely evasive and intangible with a heavy bend towards condition damage through power Mirage has it's place in SPvP and WvW. But when you think about it, mesmers with their mind altering magic, causing hallucinations and tricking enemies, has the potential to be extremely sadistic and would fill a great niche for people who were always a bit put off from GW2 mesmers which moved away from their hexes and sabotage capabilities in favor of purple butterflies. It also fills in a niche of a mesmer specialization that doesn't summon clones.

I think there's a loss less trait incompatibility that you would initially think. For starters, just look at how Necromancer traits interact with their shroud skills. Specific traits like Inspiring Distortion and the Projectile Reflection bonus on Master of Fragmentation would simply activate on Backdraft the way Transfuse works on Life Transfer, Soul Spiral, and Garish Pillar. And there's still Blurred Signets giving you distortion.

All of the traits that are "Do X based on the number of clones shattered" are all loaded onto chronomancer and Mirage has one of them so we don't have to worry about them.

My general idea is that Hexes would all work and animate like the sniper scope. As for tells, all of them would have a unique nightmare face floating above the victim like how Deadeye's sniper scope appears above the victim, it'd look like a purple mesmery version of a Sand Shade. Think something like this:

And when these pulse their effects the nightmare face would emote and get bigger like it would look like it's shouting and it's mouth would get real big and it would look real menacing so victims would know both what hex they've been marked with and when that hex is actively impacting them without looking at the UI. Regarding scoping, last expansion gave us Firebrand, Weaver, and Soulbeast. Firebrand and Weaver in particular had toooons of extremely flashy spell effects so I don't think there is too much of an issue on that front.

Regarding the technology and scoping aspect, a lot of the crazier alignment swapping capabilities are already in the game in some form, particularly in raids. I think it'd be cool to have an elite specialization take advantage of them. Thinking about a scourge spamming his AoE abilities and then swapping his alignment so he attacks his allies instead is just too hilarious to me.
And friendly fire that can screw you over is already a fun mechanic in raids. I know I've been killed while a slubbling and even during Matthias's CC phase.

I think if Soulbeast had the developers code ways to remove pets and apply pet effects to the Ranger, the technology to remove clones and have clone skills do something completely different should be possible and within scope for the game as well.

I think the biggest thing holding it back is isn't technical issues, as most of the stuff I wrote about is directly inspired by stuff that exists in game already or is at least within scope after what we saw with Soulbeast and Weaver, but balance issues and how potentially unfun it could be to play against. While alignment swapping a Scourge and causing him to AoE his team, or zapping a Firebrand and suddenly he's supporting your team and not his, sounds really fun I can see it creating hostility when the Psychomancer successfully executes on it's game plan. On the other hand, a lot of the counter play towards psychomancer is "Stop what you're doing for a bit". Stuff like Backfire is supposed to be extremely powerful and difficult to pull off, requiring split second reaction times.

Anyway, this is just what I'd start with and scale back from here if I was developing the next Mesmer elite specialization. Tell me what you think?