A little disclaimer here: I know that there’s a few concepts already on the forums (even one using the same weapon I chose but that’s a coincidence) but since I think a Bard specialization for Mesmers would be a great addition to the game, I’m trying to contribute a little so it can somehow happen on that 3rd expansion.

Bards are pretty unique in MMOs, and there's just a few that has this class, so this could be a great opportunity to make something different. It was always a class that I like, and I’m pretty sure that a lot of people do. So… I hope you like the way I think that this specialization could look like.

Also, I made some illustrations (that I’ll be showing throughout the post) and those were just montages on photoshop, nothing special because my digital painting skills are kinda lame for that, but I think the result was pretty good after all. Those include class symbol (and a attempt of a bard ''splash art'' or something). 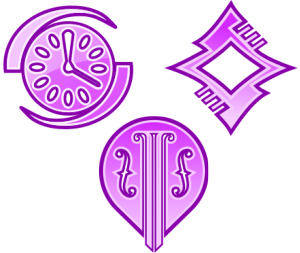 Bard Specialization Symbol I made (For comparison purposes)

Initial thought is that the Bard will use a power damage based Short Bow, like thieves. This seems to be a good option since it’s playstyle is around a mid-range combat, which is what I’ve thought for this spec, and also bows and blades are often seen as a secondary weapon for bards. Shortbow and utilities will be focused in disabling the enemy and buffing allies with profession specific effects. 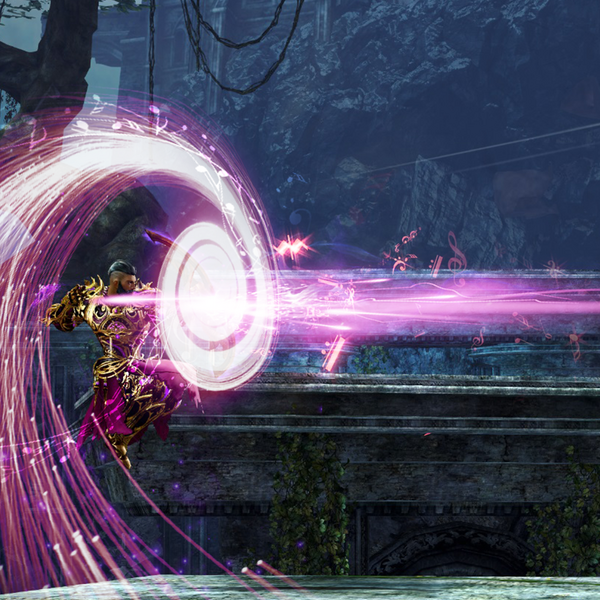 When equipping the elite specialization, your current weapon auto attack would change into a illusion of an instrument (lute, harp, flute, whatever) that you would hold when you get in combat stance, which would have the aspect of other phantasm weapons that we already have available ingame, such as Whisperblade, Wall of the Mists, Abyssal Scepter, Reaver of the Mists and so on, making all you auto attacks to be ranged, even if you’re wielding a sword for example. Your current active weapon will be showed as stowed when you’re auto attacking (showing its aura if it’s a legendary, so it won’t be spamming FX when you switch between autos and weapon abilities). You already have a good arsenal of musical instruments in the game, so models won’t be an issue.

The auto attack would look something like Siren’s Call (Trident Auto) with Music Scores and Notes coming along with it while you play the instrument. Autos could get some changes with major traits, like Mirage and Daredevil dodges with grandmasters, and that will switch the auto attack chain and maybe (?) the look of the phantasm weapon you’re holding. For example:

Option 1. Harp? - 900 un. range Projectile based auto attack which will ‘’summon a clone’’ (I’ll get into that) every few attacks (like Scepter does) and maybe apply a type of damaging condition (to match the current concept template). The range will match the current Short Bow range in the game;

Option 2. Lute? - 1200 un. range Beam based auto attack (like Greatsword) which would have a lower damage as far as you go from the target (getting Max Damage at 600 un. range?);

Option 3. Flute? - A three auto attack chain, with Arc AoE shapes and 3 a target cap, which could have a reducing area/increasing damage mechanic for each hit, for example 600 un. / 480 un. / 200 un. radius in front of you, which the last one could remove boons for example (like main hand sword). 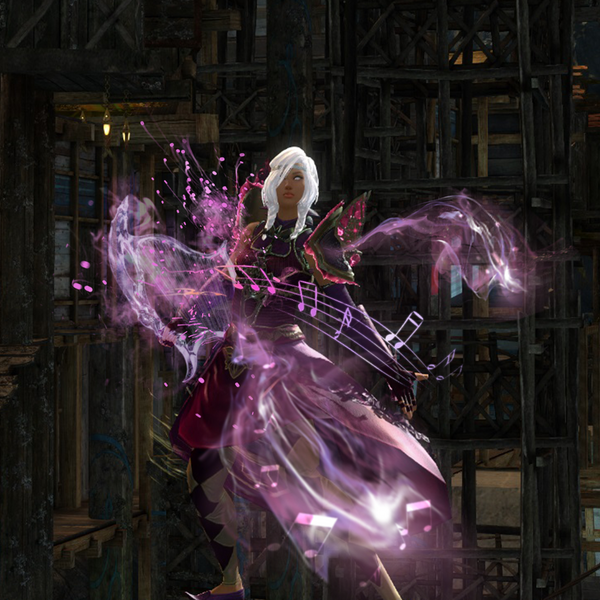 These traits of course include damage changes and maybe a condition application on some hits too which I’m not getting into. This will give the player the option to switch your autos based on your playstyle or game mode even if you have an ability kit from other weapon that wouldn’t normally have that type of auto.

Thinking about all the PHANTASMs having a bit of a change and make them play instruments while performing the same kind of attack. There’s nothing much around this topic about the Phantasms, I just want it to look like the Mesmer is summoning members of an orchestra during the battle, for visual identity purposes.

Equipping the Elite Specialization could make your Phantasm abilities, both weapon and utility, to have a little bit of a change in their names, like if you are replacing abilities like Phantasmal Warlock (Staff 3) for Phantasmal Lutenist* if they’re wielding a lute and perform an attack that has the same beam FX I mentioned on that 2nd Option auto attack trait.

*These ability changes could work just like when you turn on Lingering Curse (Curses Grandmaster Trait) on Necromancers and make your Feast of Corruption (Scepter 3) turn into Devouring Darkness.

[Quick reminder that the name I came up with for this mechanic could not be that good so I’m open for suggestions.]

CLONEs will be replaced by a new mechanic as a tradeoff. Similar to the scourge shades or the revenant tablet, abilities (weapons/utilites/traits) that should summon clones will now place a stationary effect which I’m calling FERMATAS (By definition: ‘’A symbol that tells the performer to hold the note as long as s/he would like, but certainly longer than the written note value […] colloquially a birdseye or cyclops eye’’ – eye alike symbol above the mechanic shown on illustration). 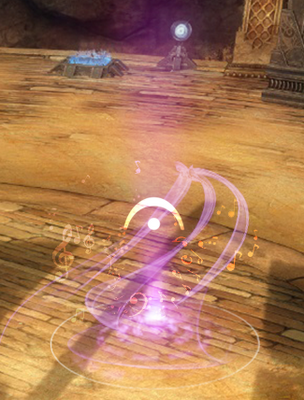 Phantasms summoned by the Bard will now turn into these areas after they perform their action, like they would turn into a clone, and new Fermatas will replace older ones just like the clones does having a 3-maximum count. Those will work for AoE applications for buffs, damage and CCs from ‘’Shatters’’ and utilities, just like Scourges does with their F2 to F5 abilities. The Clone count panel will now have a Musical Note shape and will show the amount of Fermatas you have placed.

All weapon skills that summons clones will stay the same but Illusionary Leap (Sword 3), which would make you directly leap to your target, leaving behind one of those Fermatas. Decoy and Mirror Images will summon those areas around you. Other traits and utilities related to clone creations, such as Deceptive Evasion and Signet of Illusions, will summon the mechanic on your current position when it procs. I’m thinking about Ether Feast not appropriate of this mechanic.

These areas have a sound FX, a ‘Fermata’ symbol above them, and deals a small amount of damage and/or apply a really short duration movement impairing condition (chill or cripple?) around them when they’re first summoned. They eventually break/disappear after you walk away a certain distance of it or they could or could not have a duration attached to it (I personally prefer not, but that could be shown after each of the three Music Notes symbol starts emptying).

The current Shatters and Clone panel will now be replaced by a new profession skill (which will have an ICD) followed by a bar, similar to the profession skillbar on necro, and it will work as a "timer" (instead of a second health bar) when you go into a new stance. This will make your character wield a phantasmal version one of those classical harps, something like the Orchestral Staff Skin.

There will be a new set of profession skills, called CHORDS, which could be named like: Chord of Perception, Chord of Frustration, Chord of Departure and Reverberated Chord; those will be respectively AoE versions of the core shatters that will pulse once around you (bigger radius) and around the Fermatas (smaller radius). They will have an ammunition system, which would be 3 charges showed by the same musical notes symbols above your weapon skills which will now have a brighter color and will show the charges count, and they’ll change the last charge (like mantras) at the same time for a stronger ability. Even if you have less than 3 Fermatas placed, all three symbols will glow to show the charge countdown. 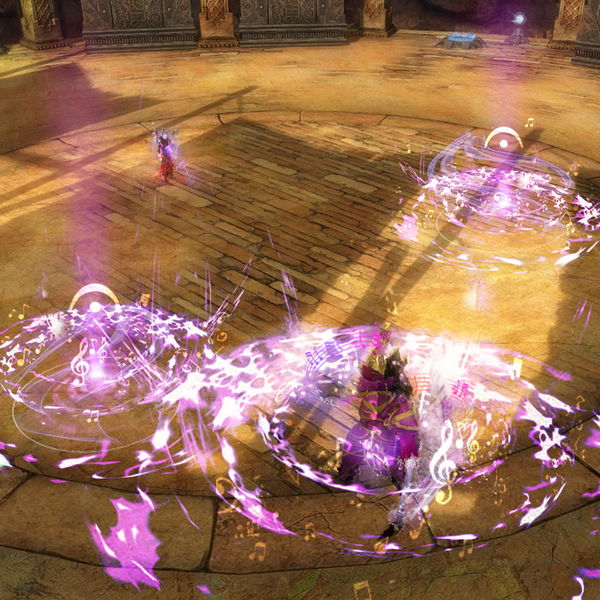 These areas created by clones will disappear after you consume all the charges or use your F1 ability again. Last charge of every Chord could be called Sonata and make the Fermata pulse a movement impairing condition 3 times before it runs out.

Last charge of each skill (I’m calling those ‘Sonatas’) will share the current shatters cooldowns and could have their cooldowns lowered by Master of Misdirection trait or a reset by Signet of Illusions (which could also use the reset on the new F1 ability to the list of skills that gets the reset, like you did with the new chrono shatters).

Other Shatter related traits would stay the same, having damage modifiers or applying conditions/boons to the pulses. Shatter Storm trait could give to the Mind Wrack related ability (Chord of Perception?) the possibility to use the Sonata version of the skill on the 2nd and 3rd charge.

Since we have 4 shatters and 5 weapon skill slots, I’m thinking about having a 5th ability which doesn’t have a 3rd stronger charge and will make you and the Fermatas throw a piercing Sound Wave towards the target as an alternative in case of the enemies run out of the range. 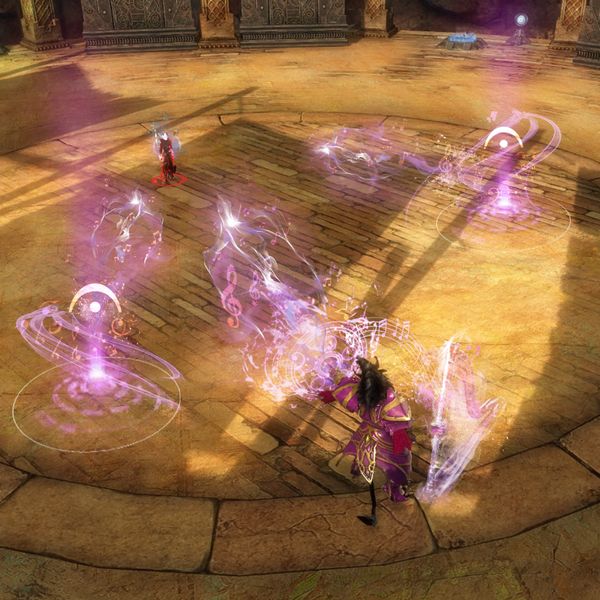 I won’t go very deep on utilities either, but I’m thinking about them having interactions with Fermatas like the shatters/chords mechanic I proposed, so they can cover up a bigger area during battle (of course, like Fermatas, there would be a target limit for allies and enemies) if you choose to pick them on your skill bar.

Since I’m thinking this specialization to be in-between a damage/utility role, those skills could apply a profession specific effect on people hit, like both Renegade’s Breakrazor's Bastion and Razorclaw's Rage applies on people in range. Those utilities will apply the effect just once and, for example, being hit by one of these effects will make allies affected to pulse (for 3 or 5 seconds maybe?) a specific boon during a few seconds; enemies to receive a pulsing disabling effect; or even create a damaging AoE around allies, like Guardian’s Zealot’s Flame (Torch 4).

Those abilities will be a new type of utility called: Songs, and they will be named something like: Rhapsodies, Hymns, Chants, Arias, so they can match the theme and would trigger a little song that plays around the Mesmer on its duration. There could be a FX of a ‘Sheet Music staff’ with some notes surrounding people hit by those skills so they can tell they have this triggering effect on them.

And that's it so far, hope you liked. Feel free to point out or add anything.