Alliances, Why We Need and When We'll Get Them — Guild Wars 2 Forums
Guildwars2.com Forums Support Wiki

Alliances, Why We Need and When We'll Get Them 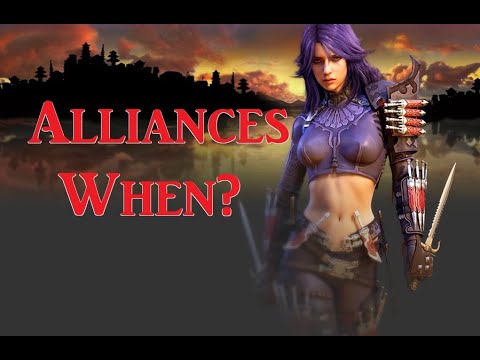 Full script of the linked video:
With the new guild wars 2 Canthan expansion on the horizon, one of the features many suspect will arrive is Alliances. Alliances were in the original guild wars factions expansion which took place in cantha, so it seems natural they would finally bring them at this time. Alliances have been long announced for WvW, but it feels like they have been delayed indefinitely. The first real posts detailing how alliances and world restructuring would work were in november 2018. Yea we're in 2020 now. It's been a while, and I think most people have lost sight or no longer understand the purpose or function of alliances.

So what exactly are alliances and world restructuring?

It's important to understand is that there are two parts to this feature: World Restructuring, and Alliances. Alliances are a group of guilds that decide they want to be on the same server, and the game will put that alliance into the appropriate matchup. Alliances will have a maximum numbers of players and guilds for balance reasons, which means server communities will become smaller. Before alliances come out, players may identify with their server which will have a long standing identity. They most certainly can identify with their guild first, but the guild exists on a server.

However, existing servers such as Maguuma, Fort Ranik, Desolation, or Stormbluff Isles will no longer exist because of world restructuring. This is a huge issue as many players find that their community is a place to call home, and a lot of the identity players have built up will be gone. They will be able to find new communities through alliances, and stay with their community if they wish, but that will be limited to a lower alliance cap rather than server cap. But not all players wish to stay with their same server. In fact, I believe many players feel that the game is not as alive as it really is because of how stagnant servers can be. Meeting new people can be a lot of fun and what the MMO experience is all about, and currently WvWers don't get that as much unless they pay a costly transfer fee.

This is basically World restructuring, or the deciding of who participates in each world. As this image shows, there will be a number of guilds who opt into alliances, there will be guilds not in alliances, and there will be players not opted into guilds. There will be WvW seasons that people are locked into their servers for, but players will essentially be able to transfer servers for free at the end of each season by opting into another guild. Transfers will also be available in the middle of seasons, but they will cost gems and have many more restrictions.
Essentially every season which lasts maybe 8 weeks there will be a reshuffling of players, guilds, and alliances into new worlds which should create a more lively environment rather than having the same teammates all the time.

But In a way, alliances and world restructuring are already here in a lesser form. Word linking currently places two or more servers together such as Anvil Rock and Borlis Pass on the same team. These are calculated by population and performance, and attempt to create the same feeling as an alliance. The balance may be better once alliances and worlds are restructured, but for the most part we have the organization here. That is an issue as well though, how does ArenaNet balance something so imbalanced to be as fair as possible. Because world v world is a 24/7 game mode, coverage and time zones are important. Anet has already attempted to remedy this with the skirmish system. This can be thought of as similar to the USA presidential election system which is a republic. Instead of counting every vote, states have their own votes, and depending on which candidate gets the most votes, that state will cast their whole representative vote for that candidate. Skirmishes are a bit different. There are three parties in each WvW matchup and a skirmish lasts 2 hours. During a skirmish the team with the most score gains 5 victory points, the 2nd highest team gains 4 points, and the third gets 3 points, these victory points decide who wins in the end, not the war score. So no matter how hard a server is crushing the other at any point in time, they wont gain more than a 5 to 3 point differential. But also, no matter how close the matchup may be, servers that never gain a point lead over another server will gain much fewer victory points. This gives more come back potential to servers with large gaps in their time zone coverage, and allows World vs World to be an ever persisting game while being slightly more balanced.

Skirmishes along with server relinkings are all changes that came in since the start of development on alliances and world restructuring. If you think about it, in their post they mention specifically they are "working on a live game, and so there are always a lot of moving parts." To me this means they are implementing these features into the game to prepare for alliances. So when the switch is finally flipped, not much will change.

So if thats the case, why do we still need alliances and world restructuring? Thats because the main issue with WvW is not guilds, or how fun the game mode is. It's the motivation to win. I always found WvW a nice place to chill and play the way you want to, as opposed to PvP which is much more structured and has very clear win conditions. So how do we motivate players to win while also allowing them to play the way they want to? Obviously giving players rewards that are meaningful and based on their performance is good, but its difficult to calculate how much a single player affects the bigger picture of their world. The pip system currently allows players to play how they want and receive comparable rewards, but in the end, the most profitable playstyle is to zerg. Now theres nothing wrong with zerging and i think that every world should have a zerg force that provides the main map presence, but when that is the ONLY presence on the map because everyone has an incentive to do that, then it gets too large, too much strain on the servers, becomes laggy, and unfun.

Constructing an omega blob and rushing from 1 place to the next isn't fun and it certainly isn't the best method to win. Rotating around and splitting up will definitely be better if there are enough competent groups, but there is no incentive to win if it takes that much effort. I think many more players would prefer to engage in smaller scale combat if it provided them and their team more. The blood lust on borderlands should be worth war score and give more rewards to the specific players who capture and hold them as this mechanic is already good for splitting up teams because they need to contest 6 different spots. These ruins are also great for varied gameplay because of the dynamic terrain unlike most other places which are just flat ground. It's a shame they dont get visited as often currently because this is where roamers should go to face smaller scale fights.

Fights inside keeps and towers are fun, but they can often be gated by... gates literally. Siege and supply are an integral part of the strategy of WvW, but they also slow it down. Often this promotes brute forcing to get through gates and walls that are being defended by players. If smaller to medium sized groups are running around split up, there will be less siege stand offs and more fights that require map rotation and awareness. How can we keep the strategy while making it more interactive? A few changes should be made.

Righteous Indignation was initially introduced to prevent trading objectives with the enemy for reward abuse, because it makes the objective lord invulnerable and deal more damage it helps to finish off fights after a team has taken hold of the obective, but why do fights need to be that decisive? The current 5 minute duration can be reduced to 2.5 mins so that groups can split up and threaten to cap more.

Siege play can be very interactive, but often most players have no idea how to use it or would rather not spend their resources on it. This often makes people depend on a commander to deploy siege properly or even at all. Siege should reworked completely and removed from the economy. Players should obtain siege from events or supply camps. The siege they obtain there will be limited and only last a few hours before it disappears, so theyll need to make decisions on which siege to use when. The siege should also be accessible through the WVW UI which can be triggered by the special action keybind rather than through inventory.

Mounts are nice, but they should be mainly a convenience addition to the game mode. They offer a good stomp utility but otherwise should be less powerful. Their mount engage should do way less damage and there should be a longer cast time to get on the mount to make you more vulnerable if youre trying to escape or chase after leaving combat.
With these changes I feel WvW will be much more meaningful and along with alliances and seasons, there can be a truly meaningful reward given to worlds based on their performance. For example all players who earned a certain number of pips during that season will get exclusive skins with better appearances depending on their worlds placement in the season. Or give players specific titles based on what role they played the most, so if you had a high kda then you can get a title of ganker, or if you captured more objectives you can get a tactician title.
Are there better changes to create more meaningful interactions in world vs world? are alliances what we really need or is it something else?